Everything you need to know about 2020's domestic first-class competition

The Bob Willis Trophy is a special one-off red-ball competition that is separate to the County Championship and will be played this summer only following the delay to the men’s domestic season due to the COVID-19 pandemic.

The tournament, which will feature all 18 First-Class Counties in three regionalised groups, will herald the start of the domestic season and will culminate in a five-day final.

County members and fans will be able to watch the new red-ball tournament via live streaming on first-class county websites while highlights of each day’s play are also set to be available.

In anticipation of the new season and tournament, here are some common questions about the Bob Willis Trophy to ensure you are across all the key details:

When will the Bob Willis Trophy start?

What is the format of the tournament?

Which counties are grouped together?

Given matches are to be played behind closed doors, how can I watch them?

Will I need to follow new social media channels to keep updated with all the information?

As a reminder, here’s where you can follow the Bob Willis Trophy:

Will the Bob Willis Trophy have first-class status?

Why not just play a shortened County Championship?

Will the point-scoring system be different from the County Championship?

Will the winning county be presented with the County Championship trophy or a new trophy?

What happens if the final is a draw?

Kent’s Fixtures for Bob Willis Trophy can be found here.

Fixtures for Vitality Blast are to be announced in early August.

If you are a ticket holder for a domestic match, you do not need to do anything at this stage. Ticket holders for men’s domestic matches and FCC members are set to be contacted by venues with the options available to them in line with the fixture announcement for each competition. 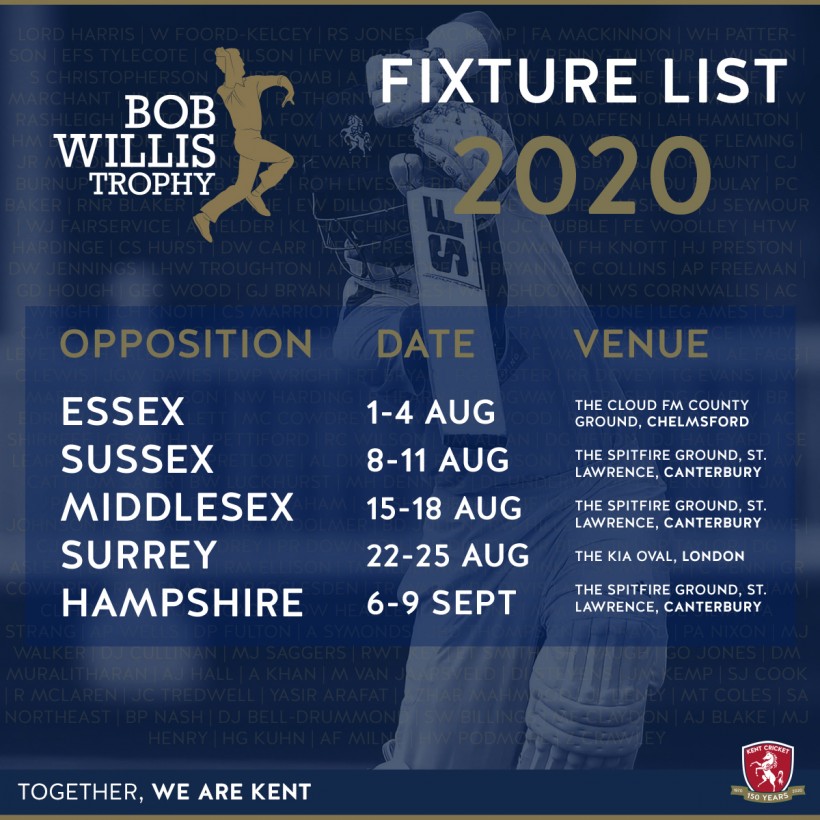