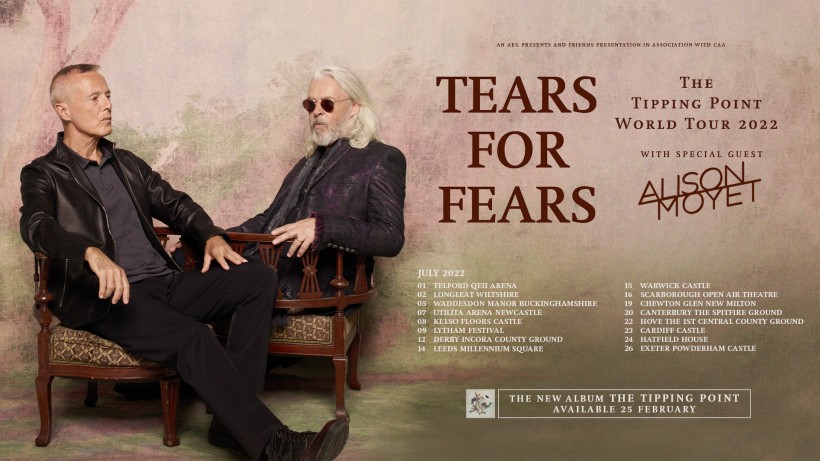 The legendary duo Tears For Fears will be returning to The Spitfire Ground in Canterbury on Wednesday 20 July 2022, in support of the forthcoming release of their first new studio album in nearly two decades, ‘The Tipping Point’, which is released on 25 February.

As part of The Tipping Point World Tour the band will be touring the UK in July 2022 with special guest Alison Moyet.

Tickets are now on sale via the button below from AEG Presents – general admission tickets will not be sold by Kent Cricket:

Hospitality packages are now also available via the Kent Cricket website from the button below:

Tears For Fears were one of the most iconic bands of the ‘80s, selling over 30 million albums worldwide with singles such as “Shout,” “Everybody Wants To Rule The World,” “Mad World,” “Sowing The Seeds Of Love,” and “Woman In Chains” acknowledged as classics.

The Tipping Point is the bold, beautiful and powerful sound of Tears For Fears finding themselves together, once again.

Providing support for Tears For Fears on their UK tour will be Alison Moyet, formerly of Yazoo, and an artist with five UK Top 10 singles.

Speaking about going back out on the road Curt Smith said: “We couldn’t be more excited to start playing concerts again. We’ve missed seeing our friends on the road around the world and the energy of performing live.”

Roland Orzabal shared: “The Tipping Point has been a long time in the making and we are looking forward to playing our favourites from the new album as well as our classics from throughout the years.”

Arriving on the 25 February, The Tipping Point is the band’s first album since their reunion album Everybody Loves A Happy Ending in 2004.

Since then, the band have toured extensively, including a sold-out UK arena tour and in 2017 released Rule The World, a best-of compilation that returned the band to upper reaches of the album charts once more.

Tickets are now on sale via the button below from AEG Presents – general admission tickets will not be sold by Kent Cricket:

Hospitality packages are now also available via the Kent Cricket website from the button below:

Please note that there may be additional measures in place to ensure the safety of staff and guests in relation to COVID-19 which may vary according to health and safety and government advice at the time of the Event (and your breach of any of these may lead to you being refused Entry and/or ejected from the Event).

An Evening with Chris Jagger