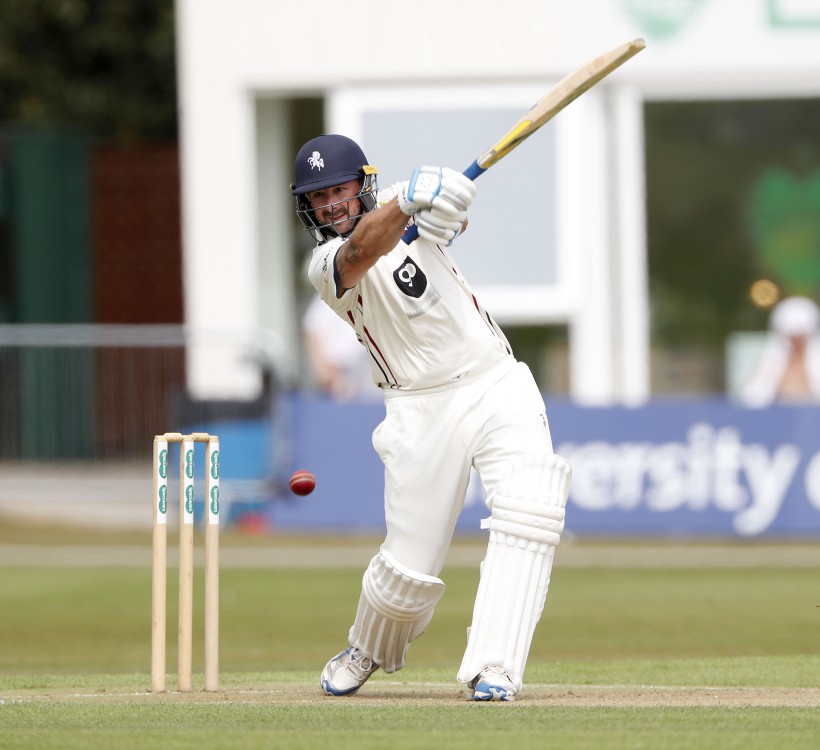 Darren Stevens led the resistance with 38 not out and a wicket against his old county as 16 wickets fell on the opening day of the Specsavers County Championship at The Spitfire Ground.

Ivan Thomas grabbed two wickets and Harry Podmore, Grant Stewart and Joe Denly each struck to leave the visitors 45 runs ahead with four wickets in hand at stumps.

Only three Kent batsmen made it into double figures as a swinging ball dominated bat in steamy conditions on the 167th Canterbury Cricket Week.

Ben Raine started the collapse by removing Daniel Bell-Drummond and Heino Kuhn in consecutive deliveries, then Zak Chappell stepped up to the plate by bagging three for 14 from the Pavilion End

Gavin Griffiths also struck, removing Sean Dickson, Kent’s top-scorer with 24, after 78 minutes at the crease to one of four catches taken by Foxes’ keeper Ned Eckersley.

Replying to Kent’s 104, Leicestershire lost their first wicket to the third ball of their reply when Harry Dearden edged behind off the bowling of Harry Podmore.

With 17 on the board Colin Ackermann, seemingly transfixed by a Darren Stevens away-swinger, dutifully followed the line to steer a catch to Zak Crawley at third slip.

Paul Horton and Mark Cosgrove then added 30 in quick time before both fell in quick succession.

Horton was caught behind for 21 off Ivan Thomas, then rookie Grant Stewart picked up his first wicket of the game having Cosgrove adjudged lbw for 22.

Former Kent man Neil Dexter was bowled by a beauty from Ivan Thomas before Joe Denly removed Ben Raine, caught Sean Dickson in the final over of the day.