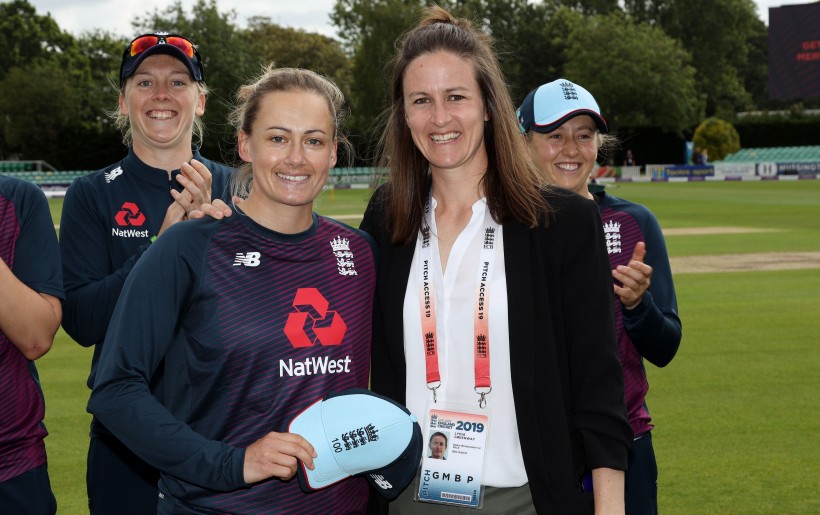 Laura Marsh celebrated picking up her 100th ODI cap for England Women by taking a wicket and Tammy Beaumont scored her ninth ODI half-century (61) as England Women won the second ODI against West Indies at Worcester to take an unassailable 2-0 lead in the Royal London Women’s ODI series.

Intermittent rain affected the game’s momentum but 61 from Tammy Beaumont and some late power-hitting from Anya Shrubsole (32* from 16 balls) took England to 233/7 from their 41 overs.

That total was adjusted for DLS to leave West Indies needing 244 to win, but a brace of early wickets for Shrubsole – who was awarded Player of the Match for her all-round efforts – and Kate Cross left the visitors with far too much to do.

Another rain break ended the game as a spectacle but there was enough time for England to win by 121 runs (DLS) and for Laura Marsh, making her 100th England appearance, to pick up a celebratory wicket.

It means England now have 22 points in the ICC Women’s Championship table, leaving them all-but certain to qualify for the ICC Women’s World Cup in New Zealand in 2021. It also extends their winning run in all formats to 12 games.

England will have the chance to seal a series whitewash and to make it 13 wins on the bounce at Chelmsford on Thursday.

Heather Knight: “It was a difficult day because of the weather but that provided a different kind of challenge and I was happy with how we responded to that.

“We had to bat slightly differently to how we approached things at Leicester and Tammy and Amy set a good platform at the top, it was hard to judge how hard to go after the first rain break and Anya’s cameo with the bat was really valuable.

“With the ball I think we were impressive, especially Anya who bowled with good pace in consistently threatening areas.

“There are still areas for improvement but winning is a good habit to get into and we want to keep working hard to maintain that.”