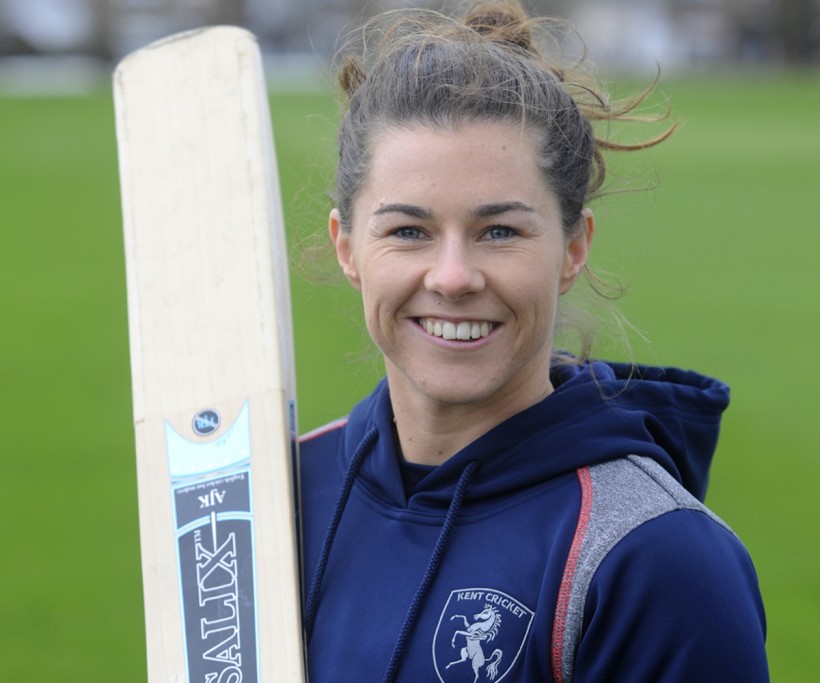 Kent Women captain Tammy Beaumont took four catches behind the stumps before carrying her bat for 79* as Kent’s oldest rivals Surrey were the latest side to be defeated by the Kent Women by seven wickets at Reed’s School in Cobham on Sunday.

Winning the toss and electing to field, ‘The Horses’ first struck in the 26th over as opener Bryony Smith (55) fell from the bowling of off-spinner Megan Belt, caught behind by captain and wicketkeeper Tammy Beaumont as Surrey were 98/1.

The home side soon fell to 138/5 in the 38th over with wickets for Belt, Tash Farrant and Laura Marsh, before a catastrophic collapse for the hosts saw them limp to 148-all out in the 45th over.

Beaumont lead the charge in Kent Women’s run chase, staying for the duration of Kent’s batting innings, scoring 79 runs from 84 balls with 11 fours.

15-year-old debutant Grace Scrivens, who was awarded her first cap before the game by her captain, scored a well-made 26 from 54 balls as Beaumont and Scrivens scored 65 in their third wicket stand.

Scores from England’s Alice Davidson-Richards (17) and Laura Marsh (6) saw Kent home as they surpassed their target of 149, finishing 152/3 after just 30.1 overs.

Kent Women have now won all three of their opening fixtures in the Royal London Women’s County Championship this season.

Their next fixture is against Hampshire Women on Sunday 19th May at Polo Farm in Canterbury. Tickets are available here >>>

Keep up to date with LIVE score updates from ALL Kent Women fixtures by following our new Kent Women Live Scores account on Twitter here.

Kent Cricket is delighted to announce that The Spitfire Ground, St. Lawrence in Canterbury will be hosting a Women’s One Day International between Cricket World Cup Champions England and World T20 Champions Australia on Sunday 7th July, as part of the 2019 Women’s Ashes series (2-31 July).

Bowlers heavily contribute on Day One vs. Yorkshire