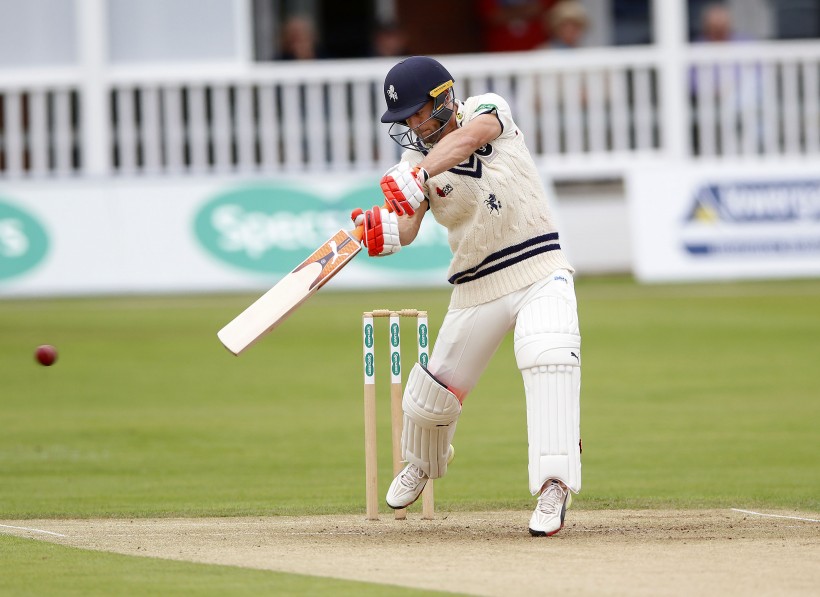 Darren Stevens and Heino Kuhn’s half-centuries, together with Joe Denly’s 154, batted Kent into a sniff of a winning position against Hampshire.

Veteran Stevens continued his incredible all-round performance at the aged of 43 after his first innings five-fer by crashing 60.

Captain Kuhn fell five runs short of his first century of the season, but his runs allowed Kent to claim a first innings lead of 146.

Hampshire whittled that down to 27 at the close, but lost day one centurion Felix Organ and Indian Test star Ajinkya Rahane in the evening session.

Kent had begun the third day on 319 for three, after Denly had struck a magnificent century to boost his hopes of playing in this summer’s Specsavers Ashes series.

He resumed on 138 and quickly moved to 150 in 221 balls but fell four runs later when Keith Barker pinned him lbw.

Ollie Robinson and Grant Stewart fell in successive Edwards overs, as the West Indian showed his aggressive side with a yorker to bowl the former and a vicious in swinger into the pads for the latter.

Meanwhile, Kuhn, who had restarted the day on 28, cruised through the morning session and formed a partnership with Stevens – having taken in 76 balls for his fifty.

The duo put on 92 for the seventh wicket to take Kent into a healthy lead, while scoring at a free-flowing rate – as had typified the entire innings.

Stevens took a particular shine to Mason Crane and carted him for two sixes on his way to a 78th first-class half-century.

But he fell for 60 he was the next of Edwards’ five victims, when he was brilliantly caught at short leg by Aneurin Donald.

Kuhn appeared on course to shadow Joe Denly to three figures but was given a working over by Edwards.

Edwards struck Kuhn with three successive deliveries, in the midriff, head and back before crashing straight into the South African’s stumps; which made Kuhn, 95, the third player to fall in the 90s in the match.

The wicket was Edwards’ fifth in the innings and handed him figures of five for 118, his most expensive haul for Hampshire.

The Kent tail wagged through Ollie Rayner and Harry Podmore’s 26 and 21, as Kent amassed a first innings profit of 146 runs.

Gareth Berg rounded off the innings when Rayner was cut caught at first slip and Matt Milnes toed to point.

With 39 overs left in the day, Hampshire attempted to shave off their deficit but lost two wickets.

Organ was lbw to Stevens in the eighth over before Rahane, following a high quality 42, when he was bowled by Stewart.

Kent batsman Joe Denly said: “It is going to be hard graft tomorrow. We might have liked a couple more wickets tonight but the pitch is a new ball wicket and we couldn’t make the in roads unfortunately.

“We are still ahead in the game and they probably don’t have the batting order they would have liked so if we can take some early wickets and put that middle order under pressure then you never know.

“It has been nice to contribute and score runs for Kent in recent weeks after the disappointment with England and their amazing World Cup campaign.

“Hopefully my runs will give a little nudge to the selectors.

“It has been a long hard couple of weeks where we have played a lot of cricket and spent a lot of time in the field but it is one last game before the T20s so we will give it one big push.

“I think spin might play a part in it so hopefully we can utilise that and put them under real pressure.

Beaumont and Marsh in Test squad