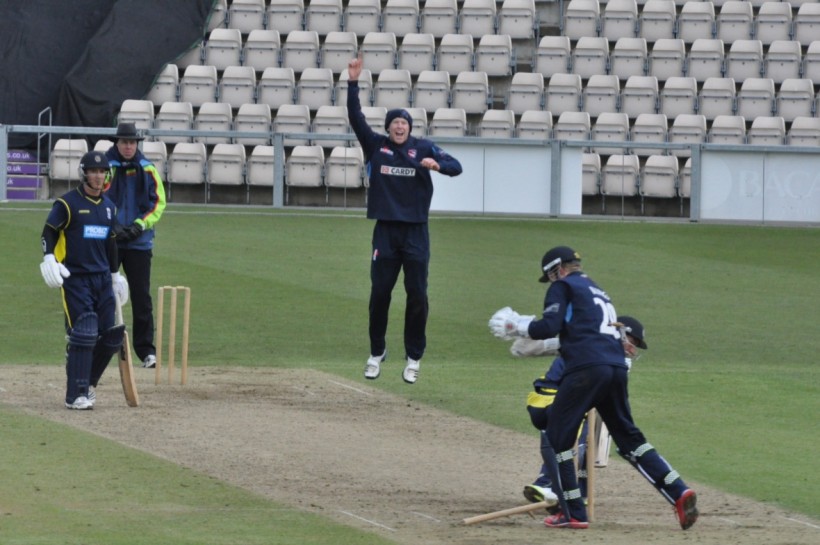 This pre-season is my third as a player, and it has been by far the coldest that I have ever experienced. The fact that the first week of 'outdoor' training had to be abandoned due to a light layering of snow on the whole of the outfield really summed things up!

The first week saw us get through all the fitness testing and it was good catch up with everyone after a selection of winter exploits, which included a few going to Australia, some at University and others choosing to do short placements or internships. The results across the board were strong which pleased Pete the S&C after sending many of us away with fitness programs to complete and targets to reach. In the first two weeks it was possible to get outside two of the days, as snow and then later a combination of rain and high winds would continue to annoy us, so we were in the Academy for much of the first two weeks.

After a couple of weeks of hard training we had a team outing organised by Pete which was run by a company called 'Operation Sniper' and involved learning about, and implementing different skills required by a Sniper in the army. The concluding part of the day saw us get the opportunity to fire a live sniper rifle and it was no surprise that the keen shooters within the group Key, Coles and Davies made the top three most accurate shooters.

The weather picked up, in as much that it was no longer snowing and this meant that we could finally get outside! Though at times it was bitterly cold, it was good that we could get outside for an extended period before our first warm up games against Hampshire at the end of March. During the warm up games the fact that more than 11 players can play allowed for all the players in the squad to get some time in the middle, whether it be batting time or getting some overs under the belt.

We played two games down at Southampton and on the first day we used a squad of 13, which allowed us to play a couple of extra bowlers, playing a 50/50 game but under 4 day Championship rules. We made 140odd for 5 and then bad light stopped Hampshire with 8 overs remaining in the day on 90-9. Though the pitch didn't allow for lots of stroke play, early season pitches are likely to be similar to the deck we found at Hampshire, so it was a decent workout for both batsman and bowlers, and it was pleasing to get a moral victory on the day!

A special mention to Jonesy for kindly sharing all the inners that he owns with the rest of the squad to field in! After defrosting Jimmy at the hotel that evening we moved onto the 2nd game the following day which was a white ball 40/40 game played under the new regulations for this season. We effectively played a bare 11 bar an opening spell from Davo who wanted to get some overs bowled with the new ball. After bowling Hampshire out for 150, we were helped to the finish line by Harmy, who was the only guy to make 50 all week, and Bally (31*) as we edged over the line by 2 wickets. The second game was particularly pleasing on a personal note as I managed to get 5 wickets, but as a bowling unit we performed really well all week and the batters showed a bit more application than our Hampshire counterparts which meant that we had a really constructive couple of days at the Ageas Bowl despite the freezing conditions, easily the coldest temperatures I have played in.

This week sees the visit of Surrey and the return of our new Captain! With Treddy getting called up as replacement to Swanny it has meant that we have not seen much of him since fitness testing in the first week and I'm sure he will be as pleased as anyone to finally get stuck into the captaincy job this season. Jonesy did a great job last week at Hampshire, as he has done in the past, but this week Treddy can really start to put his stamp on the team and how we go about our business.

Finally, off the field it has been great to welcome two new arrivals, the first being Calum Haggett, after an impressive spell in the 2s last year. Calum has had a great first month with his good work ethic fitting in really well down here, and we all hope he can make an impression this season. The second new arrival is the birth of Charlie Shreck's first child. Shrecky travelled to Hampshire last week but had to rush back home when he finally got the call! I'm sure he is really looking forward to a few sleepless nights with his baby daughter, but congratulations to him and his wife on the new arrival.

With the start of the county season only a couple of weeks away now, the guys can't wait to get going and hopefully we will get some warmer weather for the visit of Cardiff Uni and the return of Fabian Cowdrey next week!

See you at Canterbury this Summer!