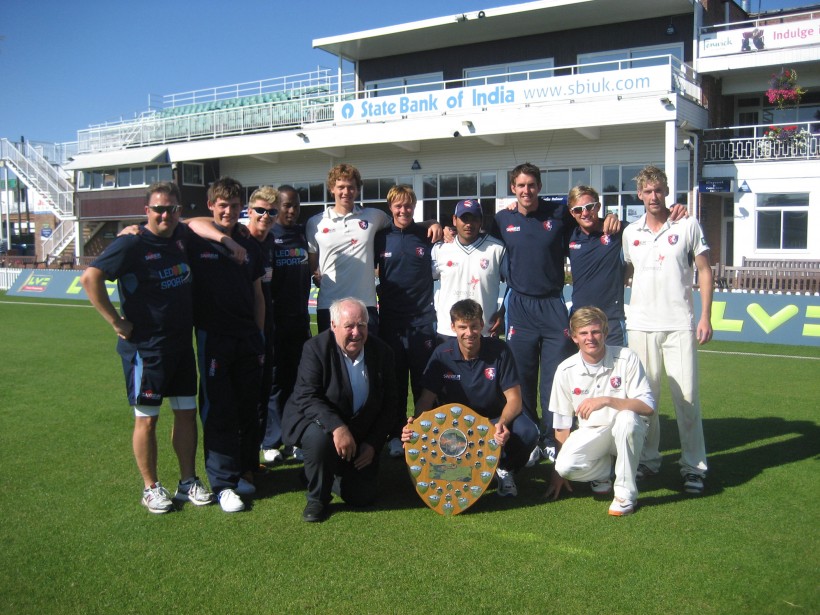 Considering I am currently seated comfortably by a rocket hot fire next to our Christmas tree indulging in a mince pie, I think that this may be a good opportunity to wish everyone a very Merry Christmas and all the best for 2013!

2012, has been a very busy year for everyone at the Club. The First XI, who narrowly missed out on promotion, with two close calls in the one day competitions, and the Second XI who managed to beat Leicestershire in a nail biting final to clinch the three day competition down at Grace Road! However, for me personally it's also been a twelve month rollercoaster!

After signing my first professional contract in the latter stages of 2011, I couldn’t wait to start my first winter with the squad. I remember vividly striding into the Kent Cricket Academy, cricket bag being dragged nervously behind me hoping the boys would approve of my presence. I guess starting a brand new chapter in your life, whether at work or even back during the school days can be pretty daunting at first, and this was most certainly no different. I’m happy to announce the boys weren’t as scary as first predicted! They aided my nerves considerably throughout the first few training sessions; which was fortunate since they were to become my teammates.

The winter consisted of a number of things for the staff who remained in frosty old Kent. I recall setting myself some ludicrous early morning alarms and setting off on some icy morning journeys from West Malling to the St Lawrence Ground. We spent our mornings under Pete Kelly’s autocratic guidance, either sprinting around the local athletics track, running up the steepest hill in Canterbury, or lifting weights in DW gym. It was nothing I had experienced before in previous teams, and the first taste of what a professional must do to compete at First Class level!

As far as the cricket was concerned, the winter saw me learn a few important factors about myself, not just as a player but as a person. Being told to go and face a set of fired up trialists raring to knock your head off, indoors on a hard surface being one of my lingering memories! Rarely leaving a 20 minute session indoors completely unscathed certainly tested my mental strength, and in a weird way those bruises I am strangely thankful for!

Having just left school, and having a fair level of success, there’s no doubt that people questioned whether I could step up my game for a bigger occasion. Dealing with pressures on and off the field is another area that has not always been easy for me and last year, with some speculation as to whether 'the latest Cowdrey' would successfully step out of his 'ancestors shadows', left me pondering the unimportant matters, perhaps more often than I should have done. In honesty, some of 2012’s summer I was battling against myself and my head as well as the leather rock being flung at me.

However, as the season progressed, with both my club side, Sevenoaks Vine CC and with Kent Cricket, I managed to score consistent runs in the Kent league and picking up a few wickets along the way, whilst also making some decent performances for the Club's second team.

September arrived before the blink of an eye and winter plans became the main, primary focus for all the cricketers. Whether it was a well earned break from playing day-in, day-out, or a shift abroad in Australia, or another prominent cricket nation. Personally, I had a choice of either spending six rocket hot months down under getting fit, playing cricket and picking up a tan, or studying for a degree at UWIC University in Cardiff.

Now considering I am hardly the most academic individual, having already swapped my degree in English to one in Sports Management, and often known for making ridiculous remarks whilst lacking a smidgen of common sense now and again, 😉 the majority without doubt believed I’d be outta here, on the plane to Melbourne like a rocket for Mars! This wasn’t the case, and admittedly after persuasion from my multi-lingual mother (a talent not inherited by the way!) and others in my life, I ventured down the M4 for my first term as a full time student…

Cardiff makes Kent’s frosty winters seem like a furnace, and getting used to consistently walking through the freezing gales of Wales was not something I’d consider a ‘positive’ attribute of the country! However, it's been an eye opening experience so far; meeting people and experiencing a new culture.

As far as cricket is concerned, I am linked up with the Cardiff MCCU squad, coached currently by Kevin Lyons. Pete Kelly and Wilko at Kent will be happy to hear that I’ve developed a fondness for sprinting, alongside drinking endless litres of green tea, so I hope to be returning for Kent duty raring to go and with bundles of energy!

Again, I hope everyone has a great festive period and New Year! Here’s to 2013 promotion!