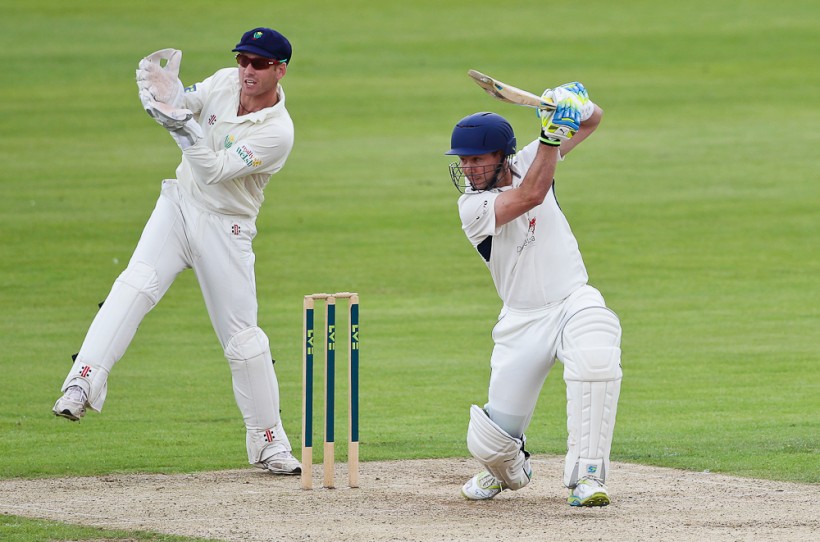 It’s been a disappointing couple of weeks since I last blogged with chances to win two games just going begging.

Both the Hampshire and Derbyshire games were disappointing results for us. We played really well down at Hampshire and were in the driving seat, but just weren’t able to get that final wicket.

Both Sam Northeast and Keysey put on a great opening stand and played really well in that game. We dominated that match and we know we should have one that one.

From there we went on up to Derbyshire and beat them in the rain affected CB40 match. That was a dominant defeat and gave us a lot of confidence going into the four day game with them, but one bad session cost us the game.

In the end, we could have won it and the way we batted on that third morning was disappointing. Every shot we hit in the air went to fielders and they took some good half chance catches.

We probably didn’t start well with the ball in the second innings and when we look back, day three probably cost us the match.

The way we fought back on the last day was fantastic and other than a great innings from Dan Redfern we could have won it. He was missed with a difficult half chance and if that had stuck, it could have been a different story.

To have them eight down at the end was disappointing, but it shows this second division is pretty tight amongst all these teams.

To get close and fall short is so frustrating on two occasions and we know that two wins at this time of year and we could have been at the top or near the top of the table. It’s left us now with a fight for promotion, but that’s only our first defeat in Championship cricket.

We’ve played really well this season and that was something we talked about in the dressing room after the game. With the way we have performed all season, it would be disappointing to let those two games affect how we finish our campaign.

We have got to get back on track with a win this week with Essex coming down for Canterbury Week. A win against them and we’d be back in a good position for promotion.

A lot of people have been talking about the weather this year, but for me it has affected everyone and you can’t stop it raining, so you just have to get on with it.

It’s frustrating when it does rain, but it looks like we are going to have some great weather this week and I hope the crowds come to Canterbury. We always have some great games against Essex and they have got Harbhajan Singh now and he’s a world class international.

We will be missing both Treddy and Colesy from our line up as they are away on England duty with the Lions, so it will be tough, but having come off those last two games, it might give us a kick up the bum and give us the drive to finish our season well.

Generally , when we have had a couple of players miss out for one reason or another this season, we have had guys come in and do well. The likes of Adam Riley, Ivan Thomas and Alex Blake have done well when they have been called upon and we still have the likes of Azhar Mahmood and Simon Cook available too.

Both Colesy and Treddy will be missed, but it gives opportunities to others and I am sure whoever comes in will do well. We will be up for it and I’m sure a few new faces in the dressing room could give us the vibrancy and energy to do well after a couple of hard weeks.

In between us playing I have managed to keep up with what has been going on at the Test matches and have tried to catch as much of the highlights of the Olympics.

It was good to see KP’s batting in the first innings at Headingley and Treddy has been telling me about the innings he played out in Sri Lanka. On his day he is awesome and it was good to see him getting his leg out of the way and belting Morne Morkel back over his head with a tennis swat.

It was a fantastic century after an interesting decision by England to leave Swann out and then win the toss and bowl. The weather played a big part up there and I hope it’s not signs of panic by England by changing the successful formula they have had for so long.

I must say I really enjoyed Saturday night watching the Olympics in my hotel room when we got those three gold medals in quick succession.

I was sat on the edge of my bed cheering them on and having watched Usain Bolt the other night, he is without doubt the greatest sprinter of all time.

He is cool and calm, but I find it interesting how he is with his arch rival, Yohan Blake. It shows that even though someone is a rival, you can be friends with them.

I’m hoping the Olympics play a massive part in getting more people involved in sport. I was lucky enough to be part of a team in 05 that touched a generation with cricket and after the Ashes it was very evident that people wanted to get involved with cricket.

Now the Olympics success we’ve had, it’s important we bring through the next generation.

Growing up in Australia where sport is such a huge part and way of life, I haven’t seen that as much over here. I know climate plays such a massive part, but hopefully on the back of this the authorities will see the difference these role models can make.

They need to put more funding behind it and get more kids in schools playing more sport because it’s been a trend that they are playing less and less. For me, the more a child can play, the better.

It’s a shame we don’t have cricket in the Olympics, but I can’t see it ever happening. I’d be very surprised if it did as there are too few nations playing the game around the world.

Being back at home after a while away it has been a mammoth washing day on Monday with loads of smelly kit! That’s always a problem for us cricketers and it made for a very fragrant dressing room towards the end of the Derbyshire game!

I’m quite lucky that I get supplied with lots of socks as that’s the thing that most cricketers struggle with.The Derbyshire dressing room attendant was really good for washing Keysey’s kit as it was in dire need of it.

I see some of the younger guys have been busy to keep themselves amused and I blame it on the weather! Young Fabian Cowdrey was duped into taking his passport to Cardiff with him as they went over the border into Wales.

There’s also a trend of dying hair, which I think won’t catch on with some of the rest of us.

Away from cricket, Charlie Shreck has been busy doing the odd BBQ down at the ground. I wasn’t able to go, but Shrecky is a mean cook and he loved his BBQ.

Quite often on a training day he will have the BBQ on and have something ready for that night. Living above Sainsbury’s he can pop down and enjoy the scenery of the St Lawrence Ground. He is going to be sampling a shoulder of our lamb soon, but I don’t think he’ll be working in Jonesy’s Kitchen any time soon – he’s got too big of a job to do out in the middle!

Special mention must also go to my lovely wife Jen and her dad as they had the lovely job of bringing in 320 bales of hay whilst I was away. What with sorting out the sheep, I think I got away just at the right time!

Anyway, I hope to see as many people as possible at Canterbury this week and don’t forget to check out my Benefit site as I have the tour of the Shepherd Neame brewery on Thursday night followed by a fantastic meal.