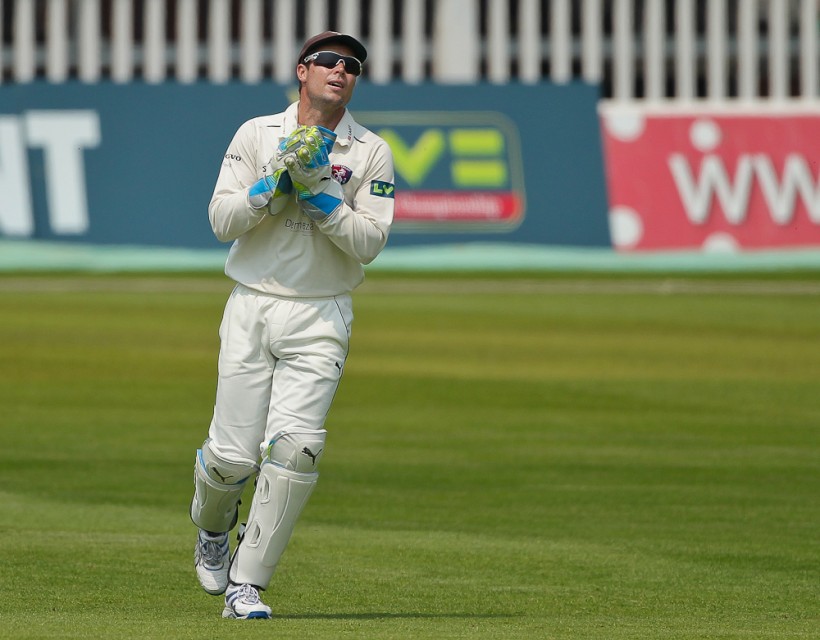 It’s been an interesting last few weeks as we build up our pre-season training ahead of hopefully a great season ahead. We’ve been back in just over a fortnight now and have gone through the dreaded fitness testing during the first week and everyone has come through that really well. Our results have all been good and that’s probably down to the fact a lot of the boys have been away playing in sunny climates.

Because of the weather we have been doing a lot indoors, but Simon Willis has sourced some mats that make the conditions much closer to outdoors than we’ve ever had before. Everyone has been happy to be on them and thank god for them given the weather we have had.

Last week we turned up and Pete Kelly had the cones set up on the outfield in the snow. I put my spikes on and finished up about three inches taller with the amount of ice on the bottom of them. We also had the chance to use the greenhouse for a while, although the wickets were a little slow because of the amount of rain we’ve had. Simon and the rest of the ground staff did an excellent job to get us out on there and we had some good days out there.

This week we’ve had some inter squad games scheduled to start preparing us for the season ahead and it won’t be long now before we play the two warm up games against Hampshire and Surrey.

By watching the rest of the guys, it is obvious that everyone is ready to get out and test themselves in match conditions now. We don’t start our Championship season for about another month and we play the Cardiff UCCE game before that and that’ll give us the ideal chance to see where we are all at.

Treddy will be back with us towards the end of the month and that will give him time to prepare for the new season. He’ll have the time to put his mark on things I’m sure.

In his absence, it’s down to us senior guys to take the reins along with Jimmy and that’s been happening. I got on really well with Treddy when I captained the side last year every now and then, and I’ve said I’d like to help out in any way I can if he is away for any reason.

We don’t have an official vice-captain, but I have spoken with Jimmy and I should be leading the side in the pre-season games. That’s something I’m looking forward to doing, but only for the fact of helping Treddy out. As a senior group, it is down to us to make sure we don’t leave Treddy with a lot of work to do when he gets back.

Towards the end of last week we did something that we’re not used to doing and that was going on a team bonding trip to a place near Guildford where we did some sniping. We had a few guys there who fancied themselves with a gun as the likes of Keysey, Colesy and Mark Davies do a lot of shooting.

There was a bit of competition between those guys and it’s always nice to get off the training paddock and do something different. We learnt a lot about the history of snipers and then went and did a sniping exercise. I think there were about 21 of us in all and Pete Kelly did well to organise it for us. Simon, the guy that ran the day did a great job.

As the new season draws nearer, it means my hockey season is now over. It’s a shame as I was really enjoying playing, but I can’t risk getting an injury now. As much as I’ve loved it, cricket is my job. I managed to score quite a few goals and I’d like to think my scoring percentage per game is right up there. If all goes well, I’d like to think I will be back playing hockey again come the end of the year.

At home, we’re all done with the lambing now which is a relief. It’s always a weight off the shoulders to know all the lambs are healthy.

Some of you may have seen that I am part of Top Flight Sports. They came to me about a month ago to be involved with that.At the moment, it is just a case of guest appearing at their camps, but at some point through the summer or during the school holidays, we are looking at running a couple of specific Geraint Jones coaching camps.

That’s something I am really keen to get involved with and we’ve got some great coaches who have been added to it, with the likes of Matt Walker and Martin Saggers having signed up too. I do some coaching already with Kent and I really enjoy that, but I’ve got to start thinking about life after cricket.

Finally, I have to add what a pleasure it has been to have been working with our new signing Calum Haggett. I’ve been really impressed with him so far. He’s keen and eager and has fitted in really well. From what I have seen of him in the nets he looks really good and I can’t wait to see him out in the middle.

Simon Willis rates him highly and I can see why and I reckon he will be good for us with both bat and ball. He could be a real threat for us in both four day and one day cricket over the coming years. He looks to hit the wicket quite hard and as a left hand bat he can smack the ball really well. I think the club may just have picked up a real gem without having to spend big money on bringing in an overseas signing. I’d like to think he has sneaked under the radar of other counties and I reckon we might have just have pulled off a real coup signing him.