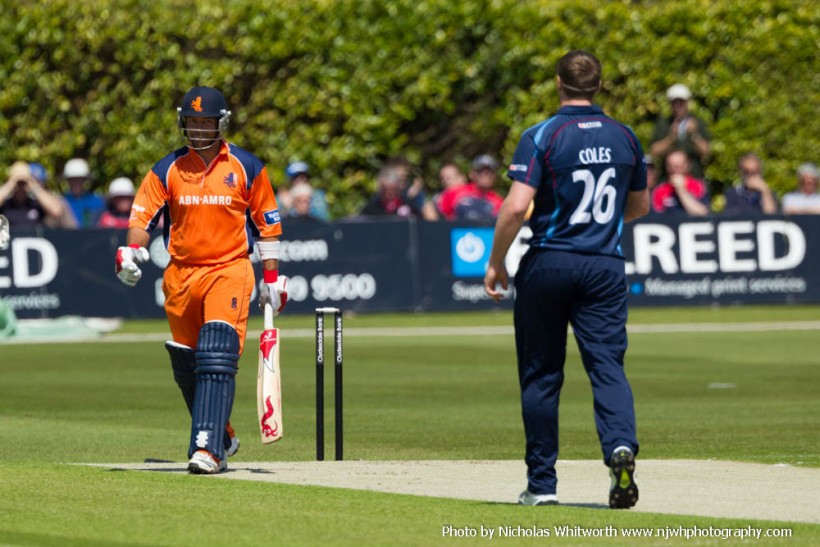 Bank Holiday Monday marked the beginning to Tunbridge Wells Cricket Festival, with an entertaining Yorkshire Bank 40 win over the Netherlands. The sun shone, Rob Key smacked an imperious match winning 144 not out and there was even a queue for the ice cream van! A far cry from the misery of last season where the first three days of the inevitably drawn County Championship game with Hampshire were rain affected and the one-dayer vs. Northamptonshire was abandoned an over into Kent’s reply.

The problem for spectators at The Nevill when it rains is there is little in the way of cover or nearby pubs to shelter unless you gatecrash a tent… Otherwise though the annual week at Tunbridge Wells a joy, notable for excellent attendances and the unique atmosphere of an outground. Back in the day, all counties played at a variety of grounds away from their headquarters, when I began following Kent they still played every summer at Dartford, Folkestone and Maidstone as well as the St Lawrence and the Nevill. I certainly miss the Mote the most, with a grassy natural amphitheatre, a splendid wicket and a lively atmosphere for big one day games. The best thing that can be said of Beckenham at the moment given the lack of cover or raised seating is that is a 'work in progress'!

With fewer County Championship games played (24 as recently as 1987 rather than 16), and better facilities both expected and required for spectators, not to mention the expense of maintaining the ground, wicket and decamping en masse and carting everything (covers, advertising boards, club shop, beer) over from the St Lawrence for a week can be both costly and time consuming. I’m delighted that Kent maintain the tradition at Tunbridge Wells even if South Eastern Railways’ own tradition of having engineering works at the same time (travellers from Canterbury had to endure two rail replacement buses or a trek via Ashford and Hastings!) can be a pain in the posterior.

On a good day though the whole vibe at an outground can be delightful. A timeless combination of chilled, tranquil viewing, a hubbub from the tents, a hum of contentment from those ringing the boundary, a throwback to the traditional image of a long lost era – if you squint it could be 1913. About as far away from the glitz of the IPL as you can get! I’ve been lucky enough to sample the delights of Chesterfield, Weston-super-Mare, Portsmouth, Cheltenham, Buxton, Scarborough, Moreton-in-Marsh, Southgate and Hull over the years along with Maidstone and Folkestone. Some have fallen by the wayside, others soldier on, some even flourish. Hopefully the tradition of the outground will be maintained in Kent for the next thirty years…

Eddie Allcorn was born in Canterbury and now resides in Harbledown. He started watching Kent in 1979 and has been an active Member since the mid/late 1980's. Eddie will be providing further blogs during the 2013 season. Many thanks Eddie.