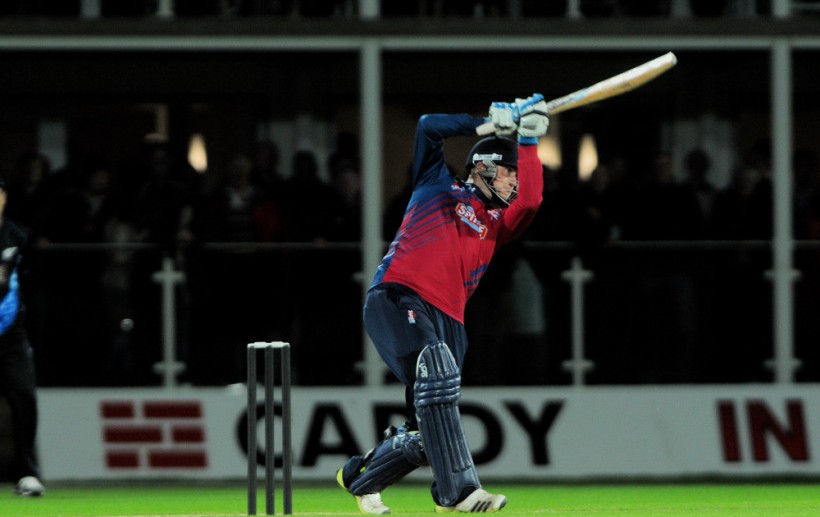 The only rules? They had to have played for Kent between 1983 and 2002 and not played for the county in any T20 games from 2003. This rules out the likes of Mark Earlham (just), but certainly leaves a pool of more than adequate options. Older readers might just gruffly point out the 70’s team from the “Glory Years” would have probably been pretty handy at the shorter form, but where would be the fun in just reeling off any of the XI’s from 1967-1978?

Right, well to open I’ve gone for two contrasting figures. My captain and pinch hitter would be Matthew Fleming. He was a fearless batsmen, he had a tendency to get a bit excited, hit two sixes, go bright red and then sky one to mid-off! However when he stayed in he could be utterly destructive, smashing the ball to all corners, willing to go aerial from the off, a deadly fielder with run-outs (Surrey would testify!) and a spirited bowler at the death. Captain Courageous indeed!

Trevor Ward would be my other opener, a classical dasher with a twinkle in his eye. Many of his shots were brutally effortless, then he would accelerate with clinical calculation. Other candidates included Mark Benson if you wanted someone to anchor the innings and Chris Tavare! Don’t laugh, he actually played some brilliant innings in one day cricket, obviously a classical shot maker so am not sure he’d have mastered many of the scoops and paddle shots and so misses out!

In at three would be Aravinda De Silva, he was a clam dissector of attacks, before you knew it he’d be on thirty, the personification of elegance with the capability to build a chanceless match-winning knock.

At four would be Carl Hooper. It was as if T20 was invented for him. It would have given him freedom to smite mighty sixes over the Pavilion from the first ball, cool, clam, utter carnage would inevitably follow. A sharp fielder and some deceptively dangerous spin bowling off about three paces completed the star package. Priceless.

If you needed a bit of hurry up at five after a sluggish start your man would have to be Graham Cowdrey. He could biff it with the best of them, a belligerent fifty from him swung many a Kent one day game, another chap built for the format.

Chris Cowdrey in at six was another one-day maestro, capable of fireworks with the bat and cunning (innocuous looking) bowling to frustrate and tempt the opposition into mistakes. Imaginative (brave) tactical contributions and a sharp catcher. He edges out Eldine Baptiste whose bowling would have caused no end of havoc but wasn’t consistent enough with the bat.

Well I’ve gone for Paul Nixon at seven (yes he has played T20, but not for Kent), obviously Alan Knott was a superior keeper and Steve Marsh could belt the ball into next week on his day, but Nixon gets the nod because he really embraced the format, his late order hitting, often in a crisis could be both stunning and fearless and his ultra competitiveness, never say die attitude and gobby personality make him the perfect fit.

At eight I’ve gone for Richard Ellison, a great swing bowler, expert at bowling at the death, squeezing the opponents and causing the run rate required to rocket. He could also swing the bat with great freedom and to no little effect. Another player that would never give up even when all looked lost, an essential mental quality.

At nine I’ve gone for Dean Headley, a smooth sinister action, pure pace and toe-crushing accuracy. Early wickets in the first six overs can stall the opposition, Deano is your man! Enthusiastic in the field and not afraid to wield the willow.

At ten I’ve gone for Terry Alderman. That evil grimace as he tore in, the sheer hostility of his yorkers, his ability to beat the bat would put the wind up any openers. No mug with the bat and in the field he edges out the likes of Martin McCague who on his day could demolish teams single handed, but when it wasn’t his day they could give him some tap.

In at eleven is Deadly Derek Underwood. His guile, imagination and cunning would have been something to behold in T20. Min Patel might have been more athletic in the field and more effective with the bat but older Kent fans and Members will just drool at the thought of what havoc Deadly would have unleashed in T20.

So let the arguments begin, comparing eras is always tricky, but I’m sure that eleven now would be capable of at least winning one T20 game this season!