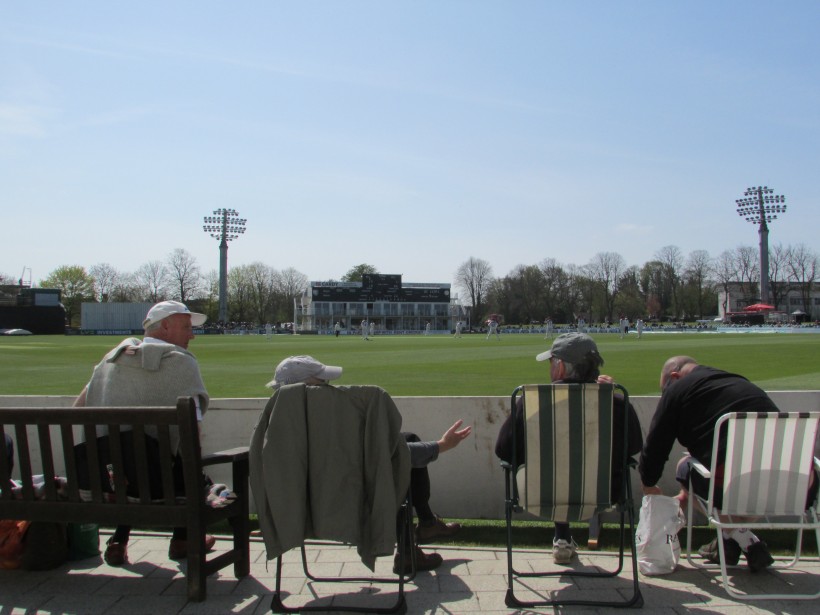 After an interminably long cold winter nothing heartens the spirit of a cricket fan more than the prospects of attending the first match of the season. Kent fans are lucky to call the charming St Lawrence Ground their home and after more than seven months away it’s great to be back for the first “proper” home game of the season against Northamptonshire. For most Kent fans that didn’t pop along for the rain-ruined university friendly or trek up to Leicester or Old Trafford to witness two somewhat stodgy contests played out in far from ideal conditions, the visit of early Division Two pacesetters combined with a dry weather forecast (unheard of in 2012!) enticed many of the familiar faces along for the first time.

The opening game often has a few rituals to be observed. Old friends are greeted for the first time since September with a knowing nod, a spot of gossip, favourite positions in the stands are reclaimed, scorecards purchased, annuals collected, pristine Playfairs leafed through, tales of tours to New Zealand or lower division football swapped and within half an hour it is as if nobody had been away.

One such group, the regular inhabitants of the back few rows of green seats at the Nackington Road End (aka the “Nackington Road Grumblers”) are all lifelong Kent supporters, their droll devotion and never ending commitment not even dented by a nagging breeze that could leave you chilled to the very marrow of your bone on both days one and two. The philosophy exemplified midway through Thursday where one decidedly enthusiastic Member decided “it was summer”, popped on their sunglasses, purchased an ice-cream and defied the elements. To his left one supporter sported a balaclava more suited to climbing Snowdon in January and to his right a woolly hat that could double as a tea cosy…

Thankfully conditions improved on Friday, arguably nicer than any day last season, and ultimately that would be everyone’s heartfelt hope for 2013. After last year’s pitiful excuse for a “summer” cricket fans are in dire need to a bit of sustained dry warm weather, it won’t stop the grumbling at dropped catches or daft run-outs but for cricket to recapture the nation’s attention in a non-Olympic or World Cup year we all need the elements to play ball as well as the Aussies.

Eddie Allcorn was born in Canterbury and now resides in Harbledown. He started watching Kent in 1979 and has been an active Member since the mid/late 1980's. Eddie will be providing further blogs during the 2013 season. Many thanks Eddie.