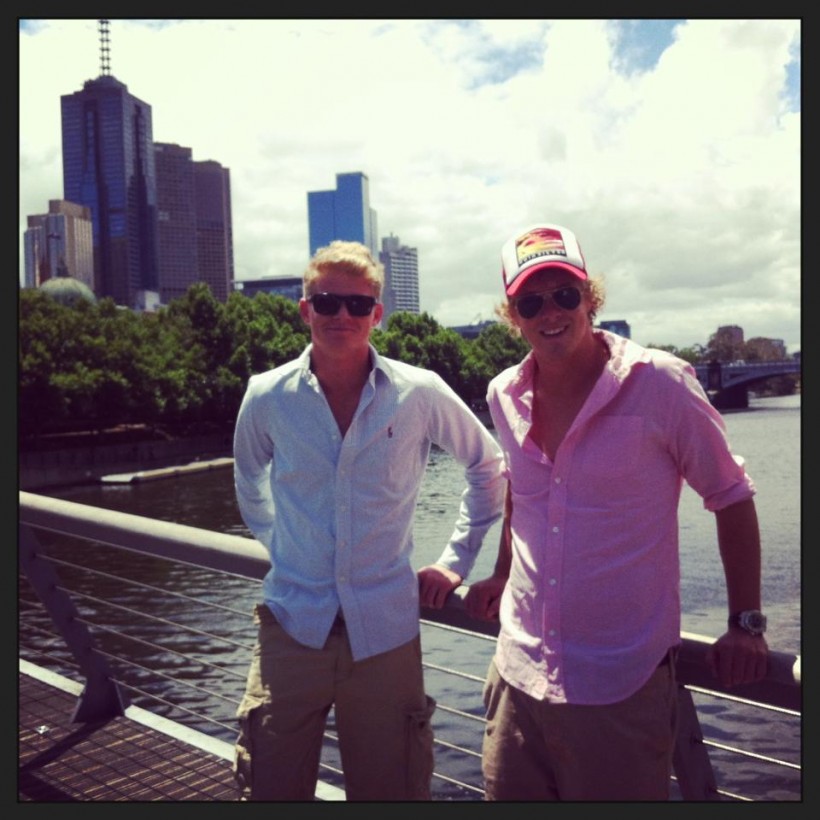 I must apologise in advance for the length of this blog, it has been too long since I have jotted down what has been going on down under. A lot has happened since Christmas and it is a long time ago but I hope everyone had a lovely festive period.

My Christmas was different to say the least, the first away from home. A few days before Christmas I met up with another Kent player and a great mate of mine, Sam Northeast, in Melbourne. It was great to see a familiar face and have some space away from the hectic schedule of Adelaide. Still, not happy I got him a present and he supposedly ‘forgot’! However Melbourne is a great spot and we were lucky enough to get to the MCG for the boxing day test, second time I’ve been and the place just gets better and better, as a young player if you can’t be inspired by that then you have something wrong with you!

We then moved on from Melbourne and drove down the Great Ocean Road which is just breathtaking and something that is a must if you’re ever in that area. Next stop was Sydney, I am lucky enough to have some great family friends who let us housesit a lovely place for a week, 10 minutes from Bondi. Safe to say it was a phenomenal week, New Years was celebrated at a huge concert and beach party on Bondi. Need I say anymore.

Back to the hard work it was after a great week and a bit and the training schedule resumed and dare I say it cranked up the intensity in the run in towards the season. However, like anything, sometimes it doesn’t always go to plan even if the hard yards had been put in during the week, I was really struggling with the bat and anyone who knows the game as a batter – sometimes whatever you do it just doesn’t go for you. Not going to lie, it was a real eye opener and at times hugely frustrating and dare I say depressing. Realising sometimes its better to ‘not try so hard’ and ‘relax’ is a key thing I’ve learnt; and finding a way for me to be able to do this has been hugely beneficial. I am sure only in an environment where it is extremely testing is where you’re going to learn such things. I spoke to Jimmy Adams about it and it was great having that support and from someone who knows exactly how it feels with a huge amount of experience.

On a positive note however, I have been thrilled with my wicket-keeping over here and have seen the hard work being rewarded; it has just been great to do it week in week and out and get some consistency under my belt.

Towards the end of January I went for a run after a frustrating game and about a mile in I felt a pain in my foot that progressively got worse and worse until I couldn’t even walk. After hours of different scans it showed I had a fracture in the joint of my right foot; very painful! It resulted in two weeks of crutches and then a further two weeks in a very fetching ‘moonboot’. In a way it might just be the break that was needed, to just get away from playing and take my mind off things.

It ended my trip in terms of playing but it didn’t mean I couldn’t go and support the boys who played a game in Melbourne against the Victoria 2nd XI in early February. It was gutting not to be able to captain the side and play however the boys did ok, lost the game but stand out performances from Ross Whiteley who struck a great hundred and the ‘veteran’ of the group, Liam Plunkett adding 60 odd and bagging a few wickets in both innings. It was a great trip and one the boys seemed to find hugely beneficial.

Last few weeks has simply been anything I can do in the gym and a lot of swimming to maintain my fitness levels and of course topping up the tan! I fly home on the 25th. I’d just like to thank everyone involved with the programme and it has been an honour to have been given this opportunity by the ECB. It has been a great experience and one I will cherish. I have made some great mates over the last 5 months and they’ll be plenty of banter flying about next season when faced up against each other I’m sure! It has been a great learning curve being out of my comfort zone and hopefully I can reap the rewards this summer by scoring a hell of a lot of runs for Kent! Really looking forward to getting home now to see everyone, and getting back to full fitness to get my teeth stuck into the Kent pre-season programme. It could be a hugely exciting year at the club!

Anyway if you’ve managed to read this far I commend you on putting up with my blogs, I hope they have been insightful and haven’t been too dull! Thanks again.