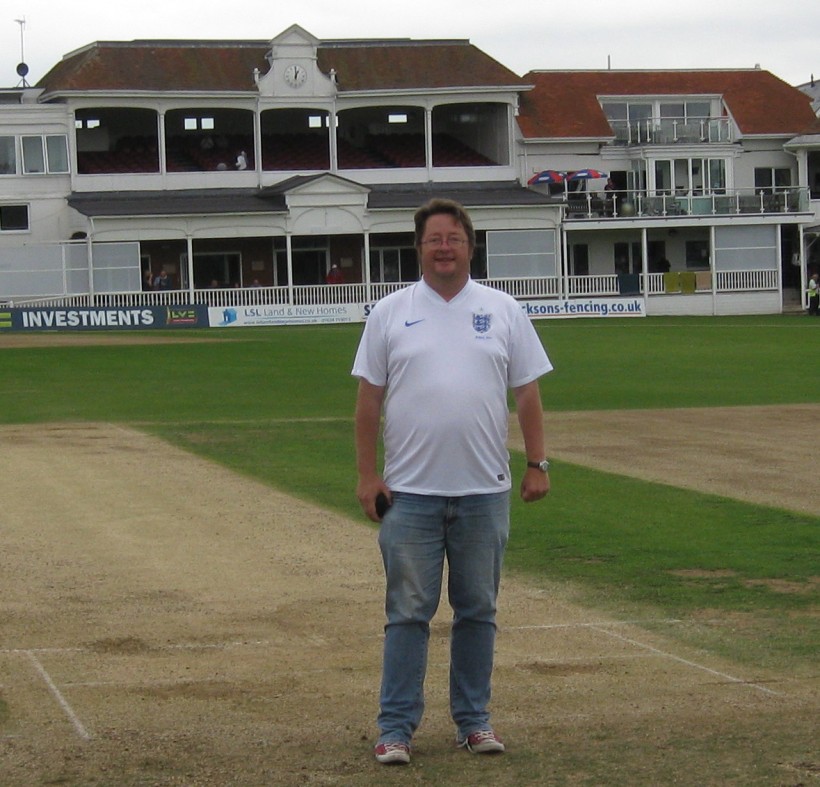 Many Kent fans have their own pre-season rituals, Eddie Allcorn always like to pop down to the Spitfire Ground St Lawrence in April to pick up his Membership, have a look round the old ground and to catch a session or two of the University match…

This spring was no different, once again Loughborough MCCU provided the opposition and as is now the tradition I was on the wrong end of a sharp shower on one day and was forced to don my trusty Gills scarf to help repel the bitter chill wind on another as it petered out into a routine draw. One for the hardiest of purists really…

What is perhaps different this season is my pre-season optimism is less fragile than usual. Realism and reality long since knocked any day-dreaming out of me (a win in a Final at Lord’s remains for me the elusive goal), but even I have to admit I’m looking forward to the 2016 season more than I have for several years.

That isn’t to say everything is perfect, we’ve seen the Specsavers County Championship promotion places halved and the lack of fixtures in August is perverse.

Although aesthetically the ground is still a work in progress, hopefully the team are a little further along that path.

For many Members the Championship remains the priority and this season looks to be a pretty even division to begin with after the promotion of Surrey and Lancashire to join their Test venue chums in the top tier.

Kent start their campaign against the newly relegated Worcestershire at Worcester on Sunday. The other team to join us are Sussex, near neighbours and welcome visitors for Tunbridge Wells Week.

The first aim will no doubt to be to actually win a game at Canterbury, something they failed to do last season.

The second will be to pep up the bowling attack, the inability to knock sides over once the ball got old, particularly at home was a perennial irritation.

Relying quite so much on Stevens is perhaps unrealistic meaning others will have to chip in along with Coles who was simply magnificent on his return to the county last summer.

Thomas, Haggett and Hunn are talented young bowlers ready to take their chance and Claydon will provide experience. Whether any of them will be regular matchwinners remains the $64,000 question.

In spin terms Riley looked more like his old self at the end of a lost season whilst Tredwell was canny and crafty as ever.

The wicketkeeping duties will be shared with Billings no doubt missing some games due to the IPL and England calls. Adam Rouse will be the young talent to fill his gloves but perhaps not emulate his ability to biff the ball into orbit in the one-dayers.

Last season the batting looked quite strong, on paper at least, but under-performed.

Northeast, Denly and Key are the usual suspects, but it is expected that Dickson will also play a prominent part, particularly after the departure of Harmison. Bell-Drummond will be hoping to push on to the next level (his 200 vs Loughborough bodes well), whilst Stevens will be hoping to get his mojo back with the willow.

The overseas signings are very interesting, New Zealand international Latham, available for most of the season, should add a bit of quality to the batting and keeping cover whilst the mid-season signing of young South African bowling sensation Rabada could add a bit of stardust.

He might shine more in the one day competitions. Kent have certainly made their mark in recent seasons and the 50 over competition generated some extraordinary matches last summer. The Royal London One-Cup win against Nottinghamshire was fantastic and the innings by Coles at the Oval quite mindboggling. A repeat of those heroics please chaps!

As for the NatWest T20 Blast, I hope Kent Spitfires will continue to show the franchise-wannabes how it is really done.

Playing brave, athletic, aggressive cricket took them to the last eight and a heart-breaking loss to Lancashire. The line-up arguably looks stronger this summer although other counties have strengthened significantly too, so it could be quite a bun-fight for qualification.

With no Aussie tour match to drag in a few more casual fans it is heartening to hear Membership sales are on a par with this time last season.

There was plenty to enjoy last season in two of the formats but the players will be well aware that they need to step it up in the four-day game.

A couple of games didn’t exactly go the distance and even allowing for the odd dodgy wicket, if they are serious about challenging the likes of Sussex and Essex at the right end of the table come September, then they will have to take more sharp slip catches, bat with more solidity and bowl with more imagination and verve when the ball is old and the track gets flat.

I’m sure the players are all well aware of that, but they should also be aware that Kent fans are feeling positive towards the team, more positive than they have for too long.

The doldrums have been escaped, the question now is can they turn their potential, their talent and youthful exuberance into consistent results.

Consistency will be the demand from the fans, and the hope as ever for some pleasant weather to enjoy the timeless tradition of County Cricket in England.

Academy scholars prepare for 2016 season at the ICC Academy

Four seasons in one month