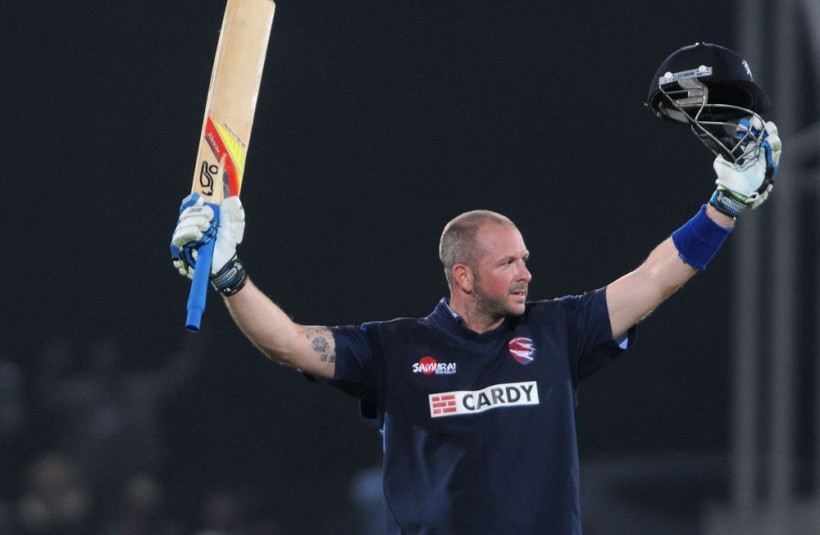 Having been fortunate enough to attend the glittering Kent Cricket End of Season Awards bash recently, I thought I might throw my own highly unofficial end of season awards into the mix. These are both personal and limited to cricket I actually attended (all the home games, only the one away game) and include categories other than just batting, bowling and catching, otherwise Darren Stevens would continue his astonishing monopoly of gongs for 2013.

Early season plaudits went to the opposition bowlers, Copeland taking a total of 10-113 in the defeat by Northants caught the eye but he was trumped by Alan Richardson who took 12-63 in the match for Worcestershire including 7-22 as Kent were hustled out for 63 in 28.3 overs. Most Impressive Opposition Bowler goes to Mr Richardson although oddly it appeared to galvanize the Kent Championship squad who thereafter would remain unbeaten!

My first Kent award goes to Rob Key for Best Revival. For whatever reason (perhaps being free of the nagging pressures of captaincy) his batting was back to its best. It was elegant, brutal and prolific. His 144* against the Netherlands at Tunbridge Wells confirmed he was back in the old groove and his 180 against Hampshire demonstrated his appetite for runs was well and truly re-ignited.

The Best Session (and least expected) also took place at Tunbridge Wells on the fourth day against Leicestershire which at the time looked like it could be a wooden-spoon decider. With rain having decimated the first two days Kent launched an astonishing assault on the visibly wilting visiting bowling attack on the final morning in a vain attempt to get far enough ahead to pressurise them in their second innings. Both Key and Nash duly went to their centuries but it was the violent, dangerous, outrageous 97 walloped by Stevens that had the crowd both in raptures and often having to scatter to avoid serious injury as he smashed the ball long and hard – 194 runs were gleaned in just twenty-four and a half searing overs. The belter of the pitch meant a dull draw in the end, but not for the want of trying.

Kent finally won in the Championship at Cheltenham in July after some imaginative declarations from both sides. Set an unlikely 411 to win Kent astonishingly got home with two wickets to spare. I wasn’t there to witness it but the Most Confusing Online Score Update goes to Nash when he came up as 199 retired! I assumed his leg had fallen off.

Prior to that there had been plenty of one day cricket with a mixture of fortunes. Obviously the One Day Match of the Season (or any other season) was the world record-breaking YB40 game at home to Sussex under the lights. Sussex creamed the Kent bowling attack to the tune of 336-5 in 40 overs, Wright’s belligerent 115 the pick of the crop, but then something really rather amazing happened. Kent thrillingly, chased it down. Northeast played the anchor role with a crucial 115, but not for the first time Darren Stevens was the match winning hero cracking a peerless 118, Kent scraped home with nine balls to spare and we all went home for a lie down in a darkened room.

Unfortunately the stunning victory was built upon immediately as the T20 season began, six straight defeats later including by New Zealand. It was about this time I did take in a spot of cricket other than Kent and my Nicest Newish Ground award goes to Chester-le-Street after I saw Durham spank Yorkshire in the T20. The locals were friendly and despite being set up for the forthcoming Ashes Test the ground and its inhabitants had retained their humanity.

By contrast my visit to the Oval to see Kent lose in the T20 against Surrey despite Cowdrey biffing a splendid 50 only wins the Most Annoying People Feeding Beer Snakes Rather Than Watching the Cricket award! The only other real plus from the campaign was the brilliant 4-8 from four overs by Philander at home to Middlesex to win Best Kent Bowling Spell but his team-mates were unable to capitalize.

The summer was also an “Ashes Summer” and I managed to see days at three of the Tests. At Lord’s I saw Joe Root add a magnificent 160 runs to his overnight score on a day of grinding the Aussies into the dust, Rodney Hogg was on duty at the Twelfth Man stall during lunch break and had the audience in stitches, but you could tell he was hurting inside really which wins my Eighteen Years of Hurt award.

My day at the Old Trafford Test saw the redevelopment of Old Trafford win Gosh That’s Big and Red award for their “Point” stand-cum-conference centre and Drunkest But Friendliest Aussie to the bloke in our row in the huge temporary stand at midwicket… It also captured Most Unlikely Occurrence when I got sunburnt on Day 1 in Manchester! My Ashes experience finished as ever at the Oval, a lively but rain affected Day 2 was followed by a mind boggling final day where Michael Clarke declared meaning 447 runs and 17 wickets fell in an epic denouement. Despite the late farce of the “bad light” despite the floodlights on at the end with England poised to make it 4-0, it still climbs into my top three days ever I’ve seen live of Test Cricket. It was a privilege to be there and wins my Epic Day of the Year. Any day that ultimately finishes with an England captain engaged in some happy urn-waving is fine by me.

Back home and Kent’s splendid YB40 campaign meant that they could still qualify for the semi-finals if they won their last two home games. Warwickshire under the lights was never going to be easy, nip and tuck, but then “pop” the floodlight nearest the green announcers shed went out along with the tannoy. To be honest the light in the middle looked decidedly good enough to me and the only murky spot was unlikely to feature any fielders, but Warwickshire were having none of it and the Most Farcical Moment of the Season award was won, Kent had lost according to Duckworth-Lewis by 7 runs and we were out.

If that had you crying into your beer then Kent’s attempts to finally win a home game in the Championship would have had you laughing hysterically. The weather forecast for the fourth day of the Canterbury Festival game was apocalyptic, Noah was frantically boat-building, so the two teams contrived an early declaration on day three, Gloucestershire were set 399 to win in nearly two days, one of which was to be under water. Predictably Kent ended up completely frustrated despite claiming the extra thirty minutes with the visitors on 307-9 on the third day and then it duly hammered down, for once the local forecasters got it right. The Most Frustrating Moment award goes to that last 8 overs, it appeared to sum our season up, leaving us with the possibility of going through an entire Championship season without a home win for the first time since 1873 when we only played twice at home. In a better than average summer is was utterly frustrating to see 14 of 44 days at home affected by either rain or bad light.

As the season came to a close I experienced both my Most Painful Moment when I was stung on the tongue by a pesky kamikaze wasp hiding in my bottle of beer during the Nottinghamshire YB40 game – emergency ice-cream required, and my Proudest Moment when I saw my nephew Jonathan’s school team win the national 2013 Chance to Shine Under 15 Final. His school, Prince Henry’s High School from Evesham in Worcestershire managed to defeat Woldgate School from Yorkshire in the Final. Torrential rain meant that they had to play at the indoor school rather out on the square of the County Ground at Northampton under lights, but to triumph in a cup with more than 450 state school entrants made this uncle feel really rather proud…

Back home in Canterbury and the last Championship game against Lancashire proved to be the best of the whole summer. Usually the last game can be a tad depressing with only the winter to look forward to, but this was quite amazing. Division Two Champions and already promoted Lancashire turned up protecting an unbeaten record. They declared towards the end of Day 3, setting Kent 418 to win. At stumps we were 32-1 and even the most optimistic Kent fan was expecting confirmation of the first summer without a home win since 1873 to be rubber stamped. Instead what we got was the Best Day of the Whole Summer. Not only that, but Kent chased down 418 to win, the twelfth highest successful run chase in Championship history ever. We had Shot of the Season by Stevens when his hook/pull/top edge/slog cleared the Cowdrey Stand(!) and we witnessed an extraordinary, thrilling, epic Kent win by two wickets. It wouldn’t have been Kent without a late wobble and Rob Key nursing a broken thumb saw them over the line. Darren Stevens finished unbeaten on a sensational 205 (Innings of the Season) and those lucky enough to be there will never forget it. It reminded us all why we love cricket and continue to loyally follow Kent. We toasted the astonishing finale amongst shell-shocked Lancastrians in the Phoenix pub, counting down the days to the 2014 season when we get to welcome Surrey back and hopefully Darren will be free to torment the opposition once more.

Eddie was born in Canterbury and now resides in Harbledown. He started watching Kent in 1979 and has been an active Member since the mid/late 1980's. Eddie has provided regular blogs during the 2013 season. The views expressed within Eddie's blogs are his personal views and not necessarily those shared by the Club. We thank Eddie for his regular contribution to the Club website.