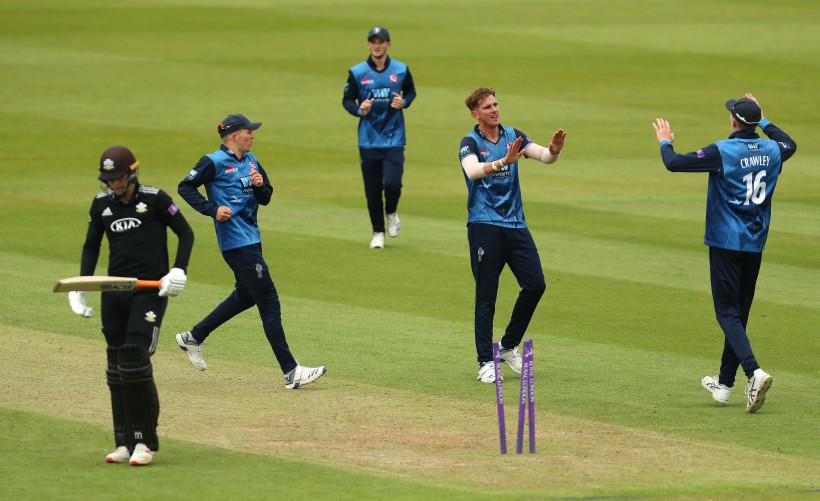 Kent Spitfires opened their Royal London One-Day Cup South Group win account for 2019 by trouncing Surrey by eight wickets at the Kia Oval. The Spitfires’ impressive bowling attack skittled Surrey for 127 inside 36 overs with only Dean Elgar, the South Africa left-hander with 56 Test caps, making it past 15 for an unbeaten 62 from 94 balls.

Kent then made light of the run-chase, coasting home with more than 21-overs to spare courtesy of a cameo 36 from 32 balls from their interim skipper, Heino Kuhn.

Chasing 128 at a modest asking rate of 2.56 an over, Kent had already reduced their target to double figures when Zak Crawley skied a catch to third man.

Daniel Bell-Drummond and Matt Renshaw, the Australian Test batsman, continued their side’s aggressive approach to the pursuit with a second-wicket stand worth 43 that ended when Bell-Drummond (41) fenced at a Conor McKerr leg-cutter to be caught behind.

Despite the fast fading light and squally showers, Kuhn and Renshaw showed all their international experience to steer Spitfires to victory with an unbroken half-century stand to wrap up their side’s win by 4.15pm.

Batting first after winning the toss on an overcast morning in SE11, Surrey made a poor start in the face of some impressive line-and-length bowling from Kent’s new-ball pairing of Harry Podmore and Matt Milnes.

Podmore broke through in the third over of the day when Will Jacks, push-driving away from the body and with firm hands, dragged a delivery onto his stumps via an inside edge.

Four balls later, left-hander Mark Stoneman nicked low to slip after being squared up by late away-sing from Milnes, who then rushed one through the gate to peg back Jamie Smith’s middle stump.

Daniel Bell-Drummond came on as a surprising first change, only to strike with his sixth delivery from the Vauxhall End, a short one that England Test batsman Rory Burns pulled obligingly to mid-wicket to make it 38 for four.

Stuart Meaker pulled a Milnes bouncer down the throat of long leg then Renshaw got one to bounce and brush Freddie van der Bergh’s outside edge for Crawley to pull off a reflex one-handed catch at slip.

Dean Elgar’s 79-ball 50 with two fours and a six helped the hosts limp to a three-figure total, but the dogged accuracy of Fred Klaassen, the Dutch left-arm paceman, was rewarded when he demolished Conor McKerr’s stumps as the tail-ender swished across the line.

Elgar was left high and dry having hit only two fours and a six during his 108 minutes at the crease when former Test team-mate and ex-Kent quick bowler, Morkel, was skittled by a Klaassen yorker to end Surrey’s innings more than an hour before the scheduled lunch interval.

Bell-Drummond, Renshaw and Klaassen bagged two wickets apiece, with Milnes the pick of the Spitfires attack with three for 37.

The former Nottinghamshire seamer said: “To be fair it was quite bowler-friendly at the start of the day, but obviously you’ve still got to put the ball in the right place and I think ‘Podders’ did that nicely.

“We were maybe a bit surprised that Surrey decided to bat first, but they’ve got a quality top order and they wanted to back them. That said, we bowled very well at them and kept the early pressure up throughout.

“Out of my three wickets I think the Jamie Smith dismissal was the best. It felt quite a good delivery to bowl him, the wind helped a bit, but it nipped back off the pitch and bowled him through the gate.

“We’re a young side and pride ourselves on our fielding and today we showed what we’re capable of as an all-round unit. As far as I see it, we have the potential to be the best in the country.”