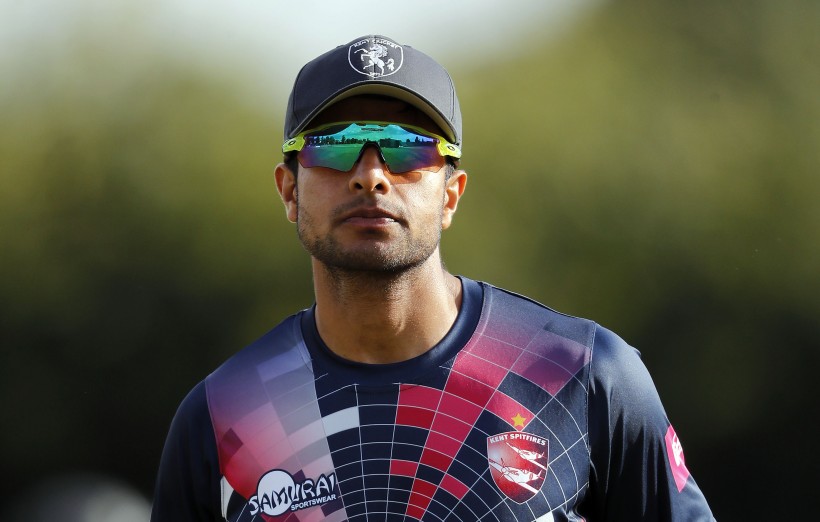 On an evening where Kent supporters flocked to Canterbury, Imran Qayyum stole the show with a career-best bowling haul of five for 21.

Qayyum, a 26-year-old in his third season on the staff, ran through the visiting middle order to inflict a 44-run Vitality Blast defeat on South Group rivals Somerset in front of the Sky Sports cameras.

In the battle between last season’s beaten quarter-finalists Kent, and Somerset, who went down to Sussex in the 2018 semis, it was Kent who again ruled the roost to extend their T20 winning streak against Somerset to 12 matches.

In pursuit of Kent’s workman-like 165 for nine at an asking rate of 8.3 an over, Somerset were dismissed for a disappointing 124 with nine balls to spare.

The visitors lost Pakistan shot-maker Babar Azam in the third over, bowled through the gate by South African firebrand Hardus Viljoen.

Tom Banton holed out to long-on in Qayyum’s first over who then had Peter Trego caught on the sweep and James Hildreth, bowled off stump in his next over.

Tom Lammonby risked a second run to deep mid-wicket to be run out by man-of-the-moment Qayyum, who then had Roelof van der Merwe caught at cover off a leading edge.

Qayyum ensured career-best T20 figures by having Tom Abell smartly stumped down the leg side by Ollie Robinson and Somerset’s last remaining victory chances went with him as Spitfires wrapped up their opening win.

Earlier, Somerset leg-spinner Max Waller struck with the fourth delivery of the night, pinning Zak Crawley leg before working across the line of a googly.

In the second over, Daniel Bell-Drummond pushed with leaden-feet at a Jerome Taylor delivery to edge low to slip.

Robinson and Nabi, two of Kent’s five T20 club debutants, took Spitfires to 54 for two in the batting powerplay and a 50-stand in 5.4 overs. Nabi hammered a fourth maximum off Waller, but perished for 34 in trying a repeat dose next ball, by chipping to long off.

The hosts mustered 91 for three at the mid-point as Robinson cantered to his maiden Blast 50 from 39 balls and with six fours.

Taylor collected a second scalp when Alex Blake drove on the up straight to extra cover, then Lammonby struck having Sean Dickson caught behind off a miscued ramp shot.

Robinson’s gritty innings of 53 ended after 49 balls when he advanced to a turning delivery from Van der Merwe to gift Banton a stumping and Somerset a third wicket in as many overs.

Jordan Cox, another Kent debutant, holed out to long-on and Kiwi Adam Milne was bowled round his legs in the same over from van der Merwe as Kent failed to up the tempo.

Late biffing from Qayyum and Viljoen took the home total above 160 before the latter was run out attempting to run a last-ball bye.

Kent captain Daniel Bell-Drummond said: “That was a brilliant win for us. At the half-way stage we felt we were 15 to 20 runs short but all credit to the bowlers for defending that score and it shows what a class attack we have.

“‘Immy’ is a good bowler and that was one of his best days for sure and I hope he’ll keep on improving on that. We started well with the seamers up top then the spinners Imran, and Nabi, on his debut had a brilliant game for us. All the pacemen backed each other up and the spinners  played a brilliant role in the middle.

“That knock from Ollie Robinson was a brilliant start for him in this format. He’s been brilliant in the Championship for us in his first proper season. He has a very high ceiling as have a lot of our other youngsters.”

Kent Spitfires get their T20 campaign going with another home against against rivals Essex Eagles in the third “Battle of the Bridge” of the Summer next Friday at The Spitfire Ground, St. Lawrence