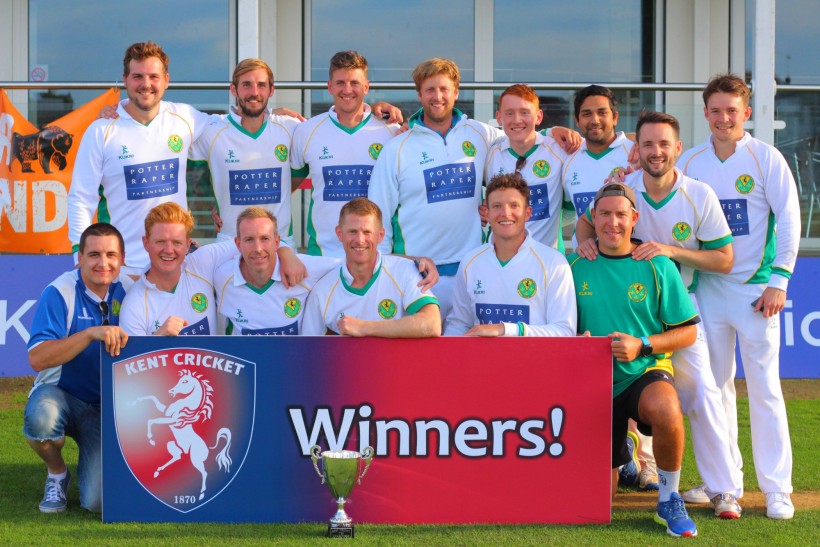 Dyno Plumbing T20 Finals Day was held on a sunny September day at The Spitfire Ground, St Lawrence and was dominated by the ball in all three games.

The first Semi Final was contested between Frindsbury CC, winners of the competition on two occasions, and Wickham Park CC, appearing at Finals Day for the second time.

Frindsbury’s bowlers all performed well, but the main destroyer of the Wickham Park innings was Chris Mumford, returning figures of 4-1-11-6, of which the highlight was claiming a hat-trick! The first in Dyno Plumbing Finals Day history.

Wickham Park were bowled out for 67, off of 18.2 overs, thus giving Frindsbury the target of 68 for victory.

Wickham Park only took two wickets as Frindsbury chanced down their target in 8.4 overs, with the two main scorers being David Coyle and Sam Dudgeon, both scoring 26.

The second Semi Final was Bromley Town, making their debut at Finals Day, and Littlebourne, finalists for the 5th consecutive year.

Again, the team winning the toss elected to field, which was Bromley Town.

Littlebourne also struggled to get going early on losing three quick wickets at the top of the innings. Gavin Dixon counter attacked and gave resistance making 30 from 31 balls in the middle overs.

However, Littlebourne lost wickets at regular intervals and were never able to make any momentum. Littlebourne finally amassed a total of 91 all out from 19.3 overs. Adam Dicker was the main taker of wickets with figures of 4-0-19-4.

Bromley Town set about the target of 92 to win, with a fast start scoring 21 from the first over of their innings. Littlebourne bowlers Joseph Coleman (4-3-11-1), and Joshua Gould (4-0-12-0) impressed with the ball and slowed the run rate of Bromley Town.

Unfortunately for Littlebourne, it was not enough, and scores from Henry Smith (20 from 12 balls), Adam Dicker (30 from 41 balls) and Michael Armenakis (20 from 31 balls) contributed to seeing Bromley Town home.

The stage was set for Bromley Town CC against Frindsbury CC in the Final.

Again, as with the previous two games in the day, the team winning the toss elected to field, with Bromley Town the victors of the toss.

As was the theme throughout the day batting proved difficult and the bowlers were having the best of the play. With both Frindsbury openers falling cheaply, it was the captain Josh Duane, and middle order batters Sean Holbrook and Liam Seymour building partnerships in the middle overs in the pursuit of a total that would give them victory.

Wickets fell regularly ,with three run outs in the innings, and all bowlers contributing to the wickets. Adam Dicker finishing with 4-0-25-2.

Frindsbury finished their innings 99 all out, setting Bromley Town CC 100 runs as the target for the win and to become the Champions of the Dyno Plumbing T20 2019.

Bromley Town again made a fast start with Henry Smith making 21 in quick time at the top of the innings. But as in the previous game for Bromley Town, the middle over bowlers against them bowled well to reduce the run rate and apply pressure.

However, it was Bromley Town’s, Adam Dicker who again produced scoring 32 from 41 balls, anchoring the innings putting the team in position to reach their target from 17.2 overs, and winning the game by 6 wickets.

Kent Cricket would like to thank Dyno Plumbing Kent for their continued support of the Dyno T20. 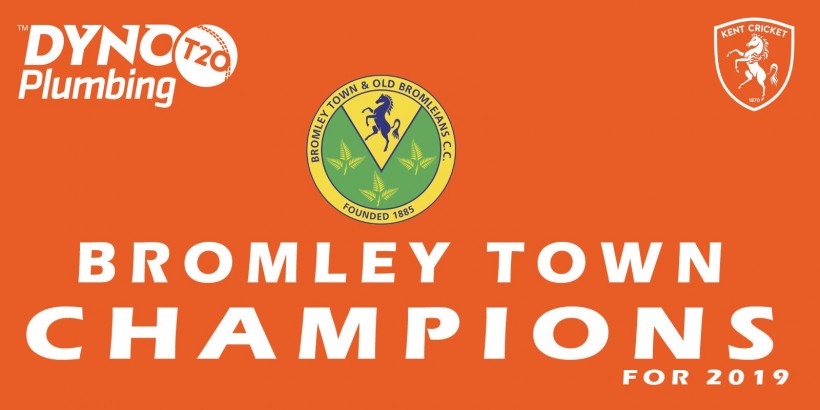