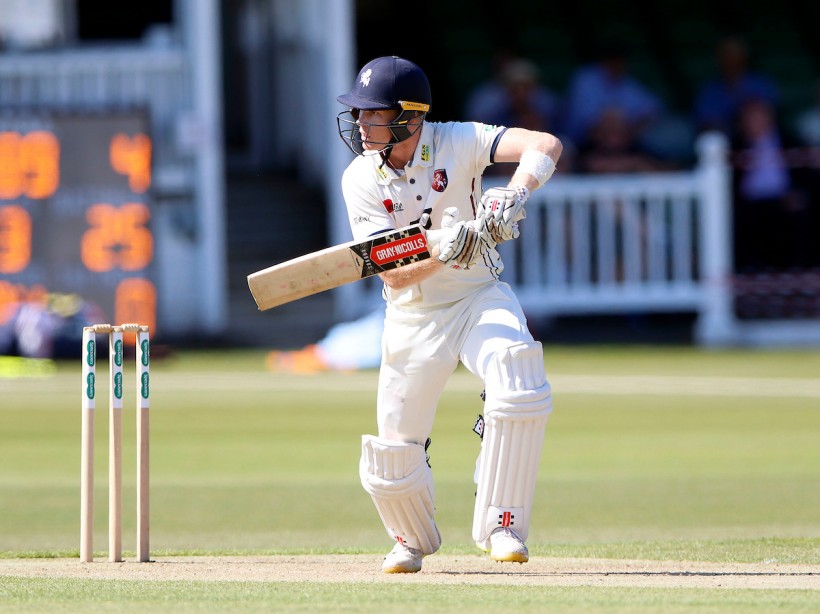 A captain’s cameo of 31 not out by Sam Billings helped Kent to a three day, three-wicket win over Specsavers County Championship rivals Middlesex at Lord’s on Wednesday, writes Mark Pennell.

The Kent skipper wrapped up his side’s ninth win of the Division 2 campaign with a streaky inside-edged boundary to fine leg to secure a 19-point win that moves the Hop County above Warwickshire and into the temporary leadership of the promotion fight.

Resuming under floodlights on their tricky overnight position of 104 for four and requiring a further 52 runs for victory, Kent added only two runs before suffering their first loss of the season, that of Daniel Bell-Drummond.

He battled bravely for 28 runs for his contribution to a 52-run fifth wicket stand with Heino Kuhn before he shuffled across his stumps against Ethan Bamber to become the 14th lbw victim of this low-scoring encounter.

Billings marched to the crease to get underway with a crisp on-driven boundary against Steven Finn as he and Kuhn added a vital 30 runs for the sixth wicket before Kuhn, playing across a shooting off-cutter from James Fuller, went for 39 from 73 balls before adding to the leg-before tally.

Stevens opened his boundary account with a clipped four through mid-wicket against Fuller to reduce the visitor’s target to 14 before he and Billings survived a run out scare after initially setting off for a single to cover point.

Teenage seamer Bamber and Fuller, at The Pavilion End, ramped up the pressure with a brace of maidens before Billings moved up to 20 with a straight drive for two but, only for Stevens to become the latest leg before casualty.

Playing across a near yorker-length ball from Fuller, the 42-year-old departed only three short of his 15,000th career run and with Kent 12 shy of their target.

Billings eased the tension by taking seven off the first over of the day from Middlesex debutant Martin Andersson before clinching the win with his fourth boundary.

Harry Podmore, the former Middlesex paceman, who took match figures of six for 70 on his return NW8, was the other unbeaten player with just a single.

Middlesex, having lost, their fourth defeat of the summer, are now effectively out of the race for championship promotion.

Captain’s reaction to win at Lord’s