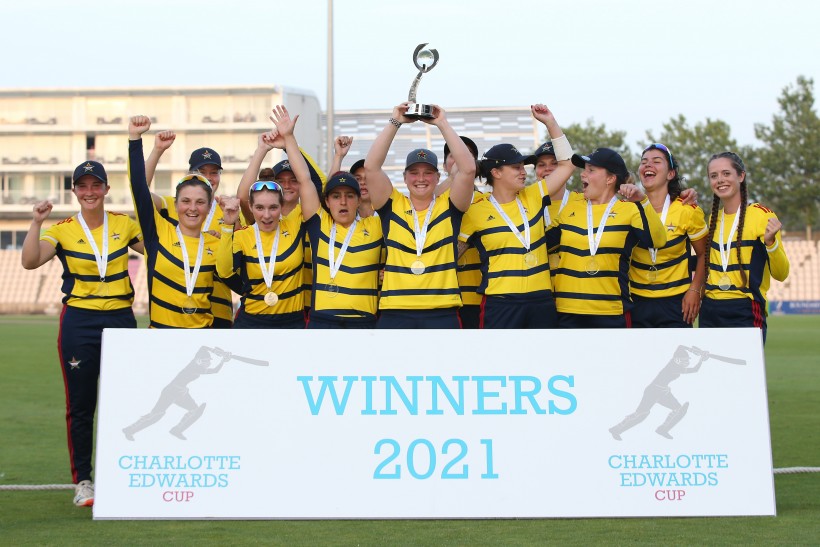 Four Kent Women were in the playing XI as South East Stars won the inaugural Charlotte Edwards Cup with a five-wicket victory over Northern Diamonds.

Alice Capsey shrugged off a collapse to smashed 40 off 26 balls, after arriving in the midst of four wickets falling in 14 balls to both steady the ship and take her side to the finish line.

Stars were chasing 139 to win as Diamonds captain Hollie Armitage collected an unbeaten 59 and had a 71-run platform set by their openers Bryony Smith and Aylish Cranstone.

But it was Capsey who once again underlined her big-game temperament to take Stars over the line with two overs to spare in front of 1,270 at the Ageas Bowl.

Diamonds found a formula in their victory over Southern Vipers in the Eliminator earlier in the day, and replicated it steadfastly.

Again, they won the toss, batted carefully in the Powerplay, one of their top four – Hollie Armitage rather than Lauren Winfield-Hill – did the bulk of the scoring and Jenny Gunn scored an unbeaten 22.

This time the openers reversed their dismissals – with Leah Dobson caught at mid-off and Bess Heath run out – by an incredible pick-up and direct hit from Emma Jones.

England batter Winfield-Hill scored 65 in the victory over the Vipers but fell for a third ball duck when she was leg before to Kent’s Grace Gibbs.

But Armitage, who’s highest score for Diamonds this season before today was 21, took control with a run-hard approach – only scoring four boundaries despite a strike-rate in excess of 120.

The skipper reached her half-century in 41 balls, identical to Winfield-Hill in the afternoon, as she added 43 with Sterre Kalis – who was caught and bowled by Linsey Smith – and an unbroken 50 with Gunn.

Where the Vipers stuttered in response, Stars attacked in the Powerplay – with Bryony Smith and Aylish Cranstone both striking three fours apiece, with the former also adding a slog-swept six as 50 was smashed in the first six overs.

After a further 26 runs in 13 balls, Cranstone stepped on her own stumps before Smith chopped her namesake on in the following over.

Amid the chaos, the precociously talented teenager Capsey had arrived at the crease, scooped to the boundary first ball and was motoring.

A straight six, a sweetly timed flicked through midwicket were the eye-candy among 14 singles and two twos.

She added 51 with the equally impressive Alice Davidson-Richards, the Kent all-rounder was caught at extra cover with three still required, before Kirstie White flicked off her legs to give her side their first piece of silverware.

Watch back in full: