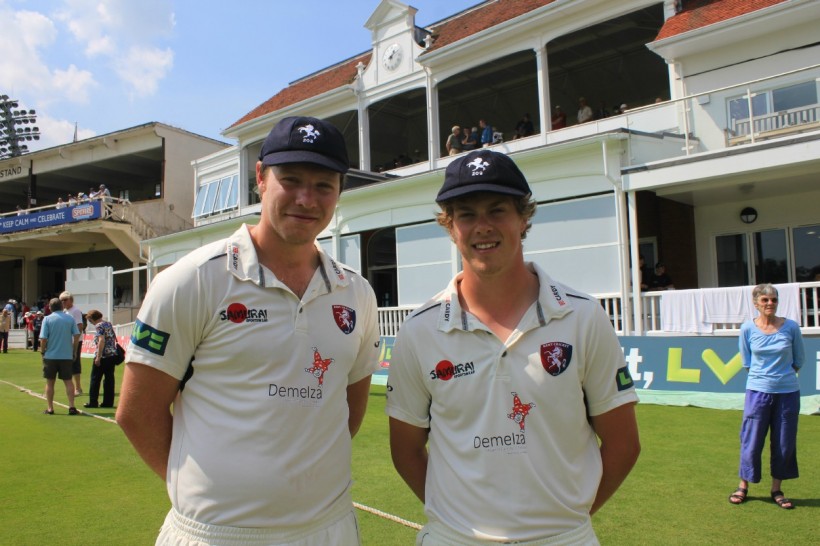 Today, as has become a tradition during Cricket Week, two county caps were presented to Kent Cricket players.

County caps recognise continued positive contributions for the Club and are a sign that the players are now established members of the first team. The players awarded county caps today, Matt Coles and Sam Northeast are graduates of the County Academy with bright futures ahead of them.

The Club present numbered caps, Lord Harris' was Number 1, and the numbers tell us the order in which they have been presented. Matt Coles and Sam Northeast, today received their numbered caps from Club Captain Rob Key during the lunch interval of the third day of Kent's LV= County Championship match against Essex at the St Lawrence Ground.

Matt Coles made his Kent debut in 2009. He is a bustling, aggressive all-rounder who has impressed in the early stages of his career with a series of mature displays. His form for Kent saw him named in the Potential England Performance Programme Squad at the end of the 2011 season, and during 2012 he has been called up to play for England Lions.

Matt is highly rated and already has over 100 first class wickets to his name despite his tender years.

In one-day cricket, Matt can be destructive with both bat and ball. His death bowling qualities have impressed and his 34 List A wickets, at 19.20, make him one to watch. The towering left-hander has also been deployed as a pinch-hitter in CB40 cricket.

One century and three first class half-centuries add weight to the proof that the Kent Academy graduate is a genuine all-rounder, and one who can fully play his part in the years ahead.

Receiving his county cap, Matt commented; "Itis an honour and a very proud day for me to receive my county cap, one that I will never forget. I'm really looking forward to hopefully many years to come at Kent."

An up and coming star of English cricket, twenty two year old Sam has been keen to force home his undoubted talents this season.

The right-hand bat is now an established member of the Kent top order after making his debut back in 2007.

Sam regularly occupies the openers position and has added two first class centuries to his tally this season, taking it to five. The former England under 19 player scored his maiden hundred back in 2009, against Gloucestershire although, arguably, his most impressive knock came against Essex in the opening round of LV= County Championship matches last season when he struck 112 out of a total of 247 to help set up a Kent victory. After 53 first class appearances, Sam’s average stands at 31.28 and he will be looking to build on it throughout the remainder of the season.

After a couple of years on the periphery of the Spitfires’ one-day side, it was 2011 when Sam really announced his arrival. Batting in the middle-order, he started to become the side’s ‘finisher’, keeping his cool and scoring quickly to lead Kent, something hecontinued this year.

As he received his county cap, Sam commented; "I am extremely happy to have received my county cap and I do hope that this is only the beginning of a successful time at Kent."