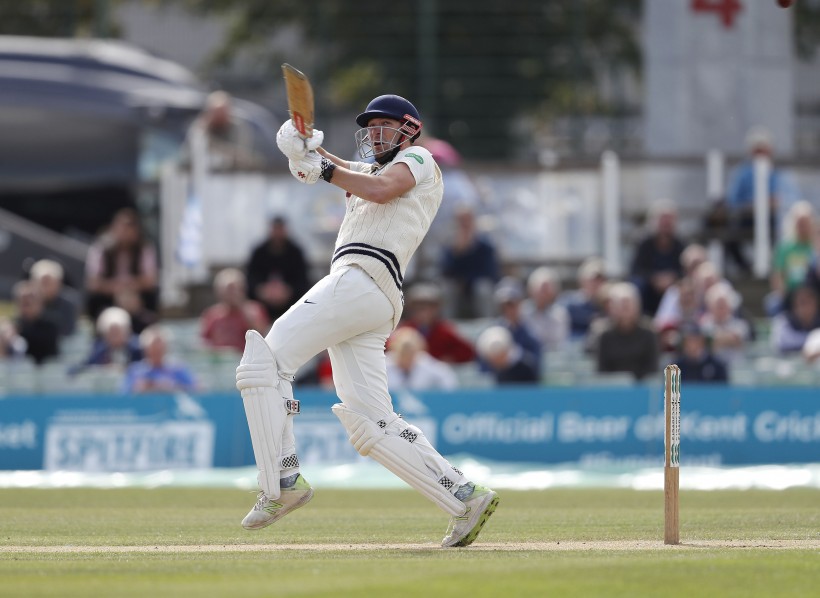 When bad light stopped play at 5pm, Hampshire had reached 80 for three after 21 overs having dismissed the hosts for 147 runs inside 44 overs.

Darren Stevens, the evergreen Kent all-rounder, picked up two of the wickets to fall, while Harry Podmore had Ian Holland caught in the cordon without scoring, but when bad light intervened the visitors had reduced the first-innings deficit to 67 runs.

Batting first after an uncontested toss, Kent were reduced to 79 for six during a torrid opening session ruled by dark overhead conditions, with only three batsmen reached double figures.

Kyle Abbott, Fresh from his career-best bowling figures of 17 for 86 against Somerset last week, took three in his opening two bursts, as did new-ball partner Keith Barker, the former Warwickshire left-armer.

Abbott, the South African, was back among the wickets bowling Zak Crawley with his second ball of the game as the Kent opener shouldered arms to an untelegraphed fierce in-swinger to lose his off stump.

Crawley soon put the dismissal behind him, however, after receiving a mid-day phone call from National Selector, Ed Smith, confirming his place in England’s Test squad to tour New Zealand this autumn.

“I saw the phone ring and wasn’t quite sure what the news was going to be, I thought maybe a Lions tour or something like that, but I was over the moon to find out it was a full England call-up,” said the 21-year-old.

“It was an amazing phone call to get. Once he said I was picked in the full squad I kind of zoned out for a few seconds and wasn’t totally sure what he was saying for a moment, but Ed was very positive and I can’t wait to get going.

“Ed went to the same school as me [Tonbridge] and they have a board up there for ‘old boys’ who go on to play for England, so I’m hoping to get my name up there alongside Ed.”

Crawley, who has never played in New Zealand, said: “To be fair, I got a pretty good ball from Abbott this morning. I reckon I’d keep leaving it just the same way, I didn’t expect it to nip back that much.

Abbott returned soon after to run one away from the defensive prod of Sam Billings and have the Kent skipper caught behind.

Barker bustled in from the Pavilion End to rush one through Ollie Robinson’s gate sparking a brief counter attack by fourth-wicket partners Heino Kuhn and Daniel Bell-Drummond that garnered four boundaries in eight deliveries.

The ploy backfired when Kuhn chipped a Barker slower ball to mid-off to make it 25 for four, then Barker switched to the Nackington Road End to draw a veil over the tortuous 31-minute stay of Jordan Cox with one that held its own against the slope to rattle the young right-hander’s off stump.

Stevens, who scored a career-best 237 against Yorkshire last week, sidled in to a warm ovation from Kent supporters.

The veteran all-rounder opened his boundary account by leaning into an off drive against Fidel Edwards, then moving onto the back foot to late cut the same bowler’s next delivery to the third man ropes.

Wickets continued to fall at the other end as Bell-Drummond, having survived numerous appeals, finally went leg before to Abbott for 39 in the penultimate over before lunch.

After a delay for rain during the break, Kent resumed only to lose their last four wickets for 68 runs as Barker bagged a worthy five for 48.

Stevens went without addition to his 17 LBW as Barker jagged one back off the seam, then Podmore heaved across the line and dragged onto his stumps for Barker’s fifth.

Rayner joint-top scored with 39 before miscuing a hook to long leg then Matt Miles miscued to mid-on to become the sole victim to spin as Kent succumbed inside 43.5 overs.

Abbott finished with three for 49, while Edwards and Liam Dawson claimed one wicket apiece.