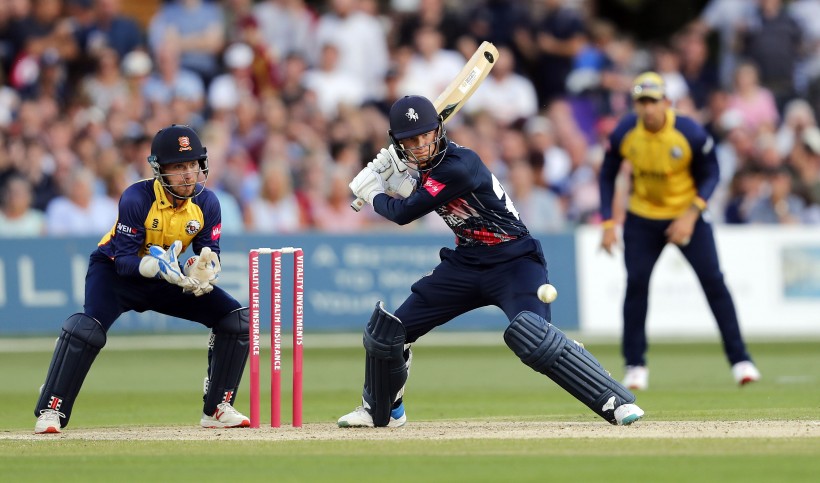 A 16-strong squad, including Kent’s 18 year-old Jordan Cox and new signing Hamidullah Qadri, also 18,  has been named for England U19’s tour to the Caribbean in November and December, where the Young Lions will play in a 50-over tri-series against West Indies U19 and Sri Lanka U19. This series is the last competitive test for the young players before the ICC U19 World Cup, which takes place in South Africa in January and February 2020.

Cox hit an unbeaten 122 not out in his last match for the Young Lions, as England and Bangladesh Under 19s fought out a thrilling tie at The County Ground, Beckenham. He also featured for Kent against a touring Pakistan side back in April, scoring 21 runs and taking a catch.

Overall for the Kent first team this season, the right-hander has made eleven senior appearances, scoring 150 runs at an average of 16.67. His top score of 52* came against Sussex in a two-day pre-season friendly.

Off spinner Hamidullah Qadri, who has recently signed for Kent, joining from Division 2 side Derbyshire, also played for England under-19s with Jordan Cox this Summer and claimed a 5-wicket haul against India U19’s. Qadri has taken 23-wickets in First Class cricket, including a 5-wicket haul on debut for Derbyshire against Glamorgan.

Many of the 16 players selected featured in this summer’s tri-series against India and Bangladesh, including captain George Balderson and vice-captain George Hill.

Scott Currie and Sam Young come into the squad having showed their potential this summer in second team cricket for Hampshire and Somerset respectively, and together for Dorset in the National Counties competition.

Wicketkeeper Harry Duke, from Yorkshire, is also new to the squad and was selected off the back of impressive performances with the gloves at the ECB Young Lions Super 4 Competition, as well as for the Yorkshire Academy and Second XI.

England U19 Head Coach Jon Lewis said of his squad: “With the World Cup on the horizon, this is our last opportunity to assess our squad and decide which 15 players to take with us to South Africa. We’ve also taken this opportunity to look at some players who are relatively untested at this level and have the chance to force their way into our World Cup squad.”

“These experiences are a major step forward on their journey and will help them understand the levels they need to achieve to be successful professional cricketers.

“West Indies and Sri Lanka are both countries with fantastic cricketing pedigrees and cultures, so we’re sure to experience strong and diverse challenges ahead of our main objective after Christmas.”

Lewis added: “I’m delighted to welcome Ian and Nic to the team for our two tours this winter. After a thorough and open recruitment process we decided that both coaches were exactly the right fit for the team and the programme at this point in time.

“The experience they have can only add value to the programme over the short period of time we have with the players.

“Ian is one of his generation’s highest run scorers, whose knowledge and experience of playing under pressure at the highest levels, including multiple World Cups is a brilliant resource for the players to tap into and something that is not always available to them at county level.

“Nic has great experience in international coaching with West Indies and Sri Lanka and is a native of Highveld in South Africa, making him an ideal candidate to fill gaps in our knowledge of our opponents and the conditions we are going to play in.

“Alongside that he is a brilliant fielding and wicketkeeping coach and I expect him to make an impact on our skill execution in the field, an area I am very keen to improve with this group of players. As we saw during the final moments of the Summer’s World Cup, it’s an area that can make the difference between winning and losing trophies.”

England U19 squad for tour of the Caribbean