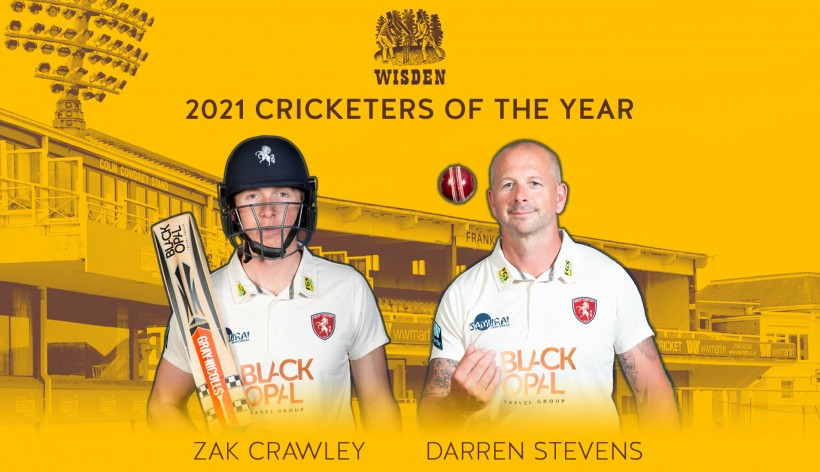 Zak Crawley and Darren Stevens have been named as two of Wisden’s Five Cricketers of the Year for 2021.

Wisden Cricketers of the Year have been elected for one of the most decorated individual honours in the game by the annual publication, Wisden Cricketers’ Almanack, since 1889. Selections are based primarily on a player’s performances during the previous English Summer.

Since 1897, Wisden has selected five players from each season to give the accolade of Cricketer of the Year, with a few notable exceptions.

This is the first time two Kent stars have been in the same cohort of Wisden Cricketers of the Year since Douglas Carr and Arthur Day both earned the accolade in 1910.

In total, 30 Wisden Cricketers of the Year have been selected whilst playing for Kent, including great names such as: Frank Woolley, ‘Tich’ Freeman, Colin Cowdrey, Les Ames, Derek Underwood and Alan Knott.

Kent also boasts two of the seven women’s players to have been named a Wisden Cricketer of the Year to date, with Charlotte Edwards (2014) and Tammy Beaumont (2019) having both previously been selected.

Alongside Crawley and Stevens; West Indies all-rounder Jason Holder, Pakistan ‘keeper-batsman Mohammad Rizwan and England and Warwickshire opener, Dom Sibley, have also been named as 2021 Wisden Cricketers of the Year.

If anyone fully announced themselves onto the world stage in cricket over the last year, then it is Zak Crawley.

The Kent batsman went into 2020 having just made his Test debut in November 2019, and over the course of twelve months has cemented his name as part of England’s batting line-up. 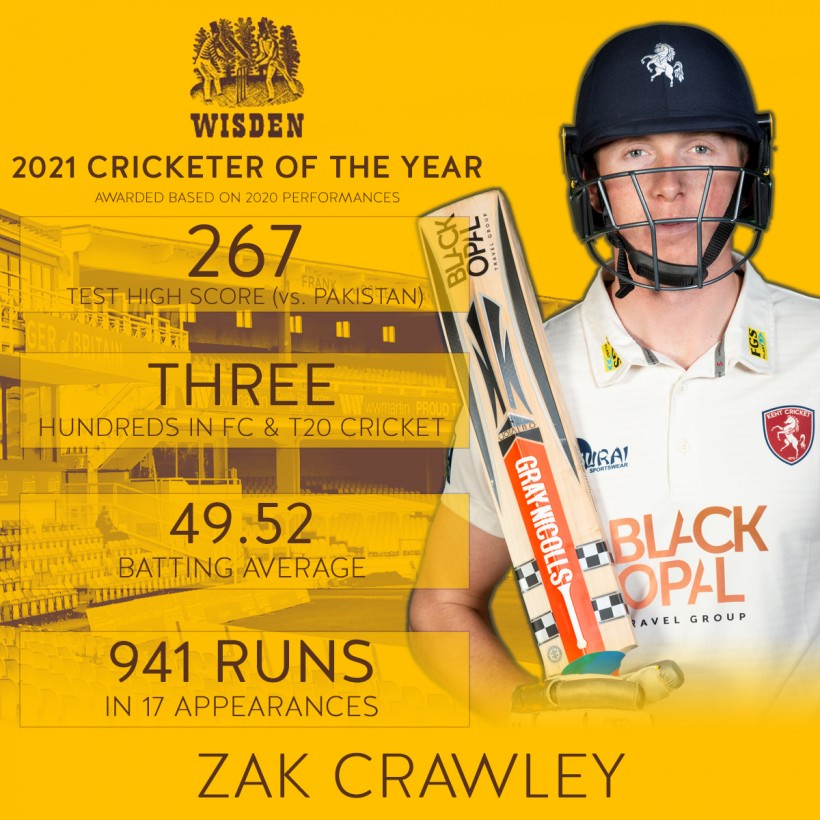 Following some good performances in South Africa including a wonderful parried catch off Ben Stokes in Cape Town, Crawley lit the world alight with a mammoth score of 267 against Pakistan in August, his maiden three-figure score in Test cricket.

For Kent, Crawley returned to county cricket after England commitments to hit a 94-ball Bob Willis Trophy century against Hampshire at The Spitfire Ground, St Lawrence, before becoming the sixth Kent star in the Club’s history to have scored a hundred in all formats for the county; smashing 108 not out from 54 balls at in a T20 against the same opponents at The Ageas Bowl.

The then-22-year-old was awarded an England central contract in September 2020, as well as being named PCA Young Player of the Year.

In a season heavily affected by the COVID-19 pandemic, revised scheduling saw the replacement of a full County Championship season with the Bob Willis Trophy.

Although a ‘one-off’, the late start of this new competition meant that county cricketers would play few fewer first-class matches than in a ‘normal’ English Summer. 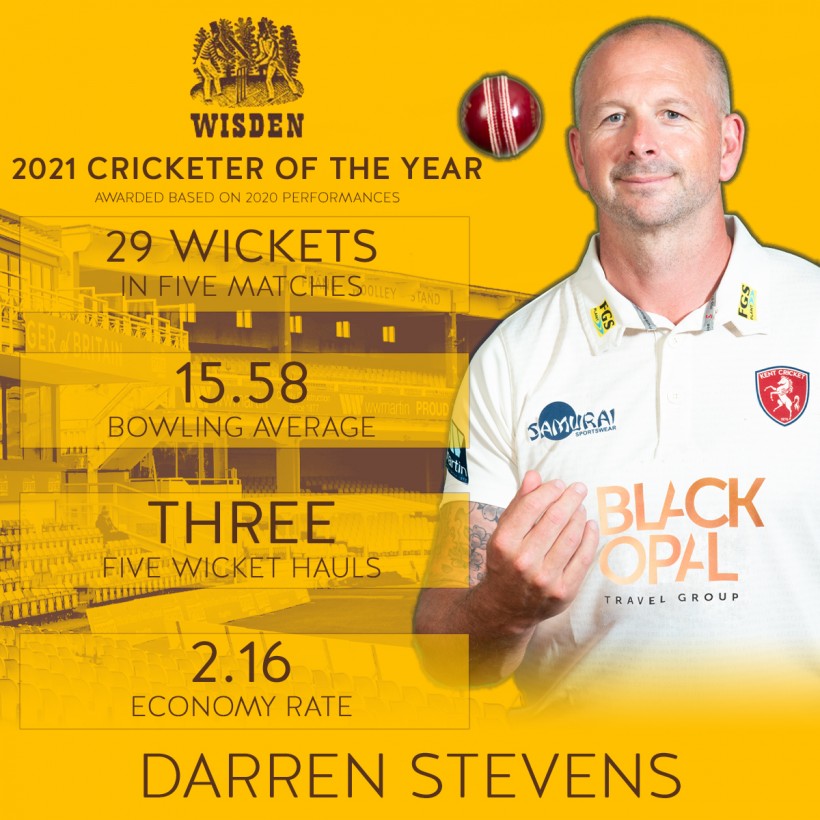 Kent played five matches in the Bob Willis Trophy, and Darren Stevens was in electric form with the ball in all of them. The 44-year-old ended the first-class season with a bowling average of just 15.58.

The all-rounder finished Kent’s foray into the tournament with 29 wickets in just five matches, finishing as the tournament’s third overall highest wicket taker, and recorded three five-wicket hauls in the process.

He becomes the oldest player to be a Wisden Cricketer of the Year since 1933, and the fourth oldest cricketer to receive the award, behind Lord Hawke, W.G. Grace and Ewart Astill. 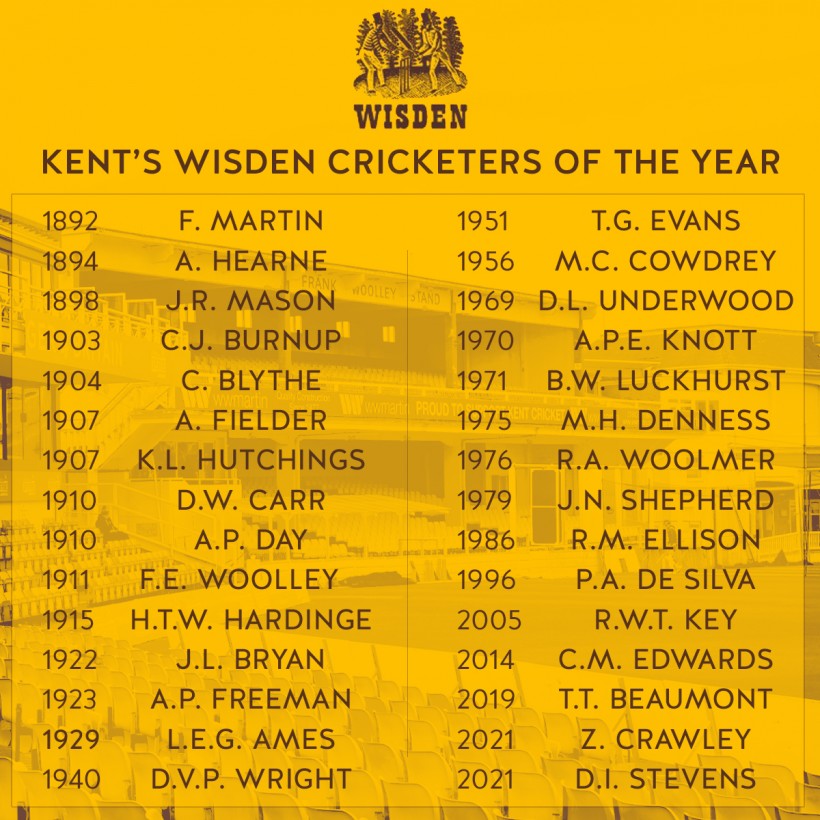 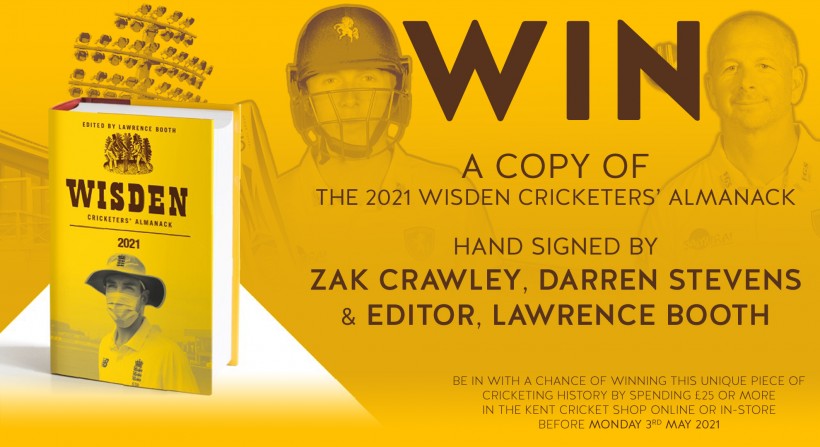