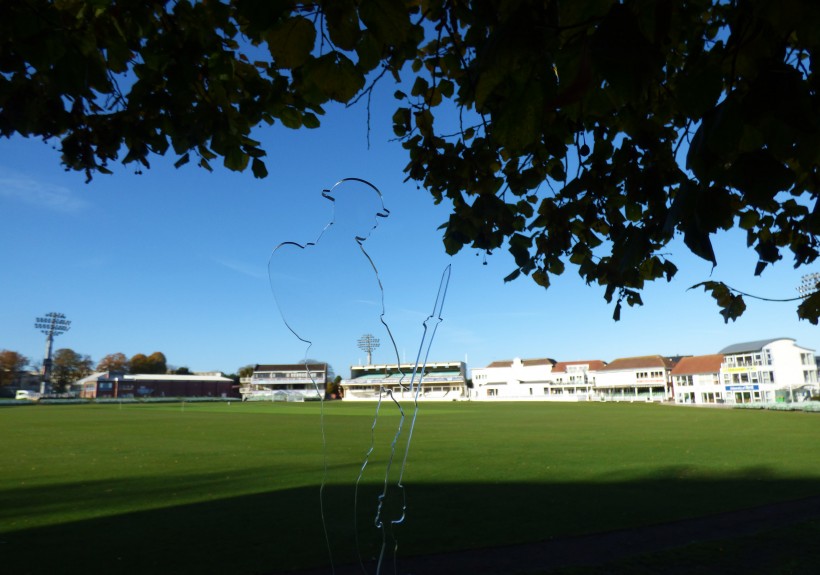 Whenever the First World War is discussed in a cricket context, the names of two great cricketers of Kent – Hutchings and Blythe – usually loom large.  They were superb cricketers for county and country, and were deeply mourned as beloved and familiar figures on the green fields of England.

Kenneth Hutchings scored one of the fastest and most enchanting centuries in England v Australia history at Melbourne in the 1907-08 series, reaching three figures in just over two hours as England raced to a first-innings lead.  They still needed close to 300 to win on the fifth and sixth days, and Hutchings, a powerful driver, contributed second-top score of 39 before S.F.Barnes and Arthur Fielder stole 39 runs against panicky Australian fielding to steal the Test by one wicket.  It was Hutchings’ only real success in an Ashes series won 4-1 by Australia.

Hutchings, a lieutenant in the King’s Liverpool Regiment, was blown apart by a shell in Ginchy, France, in September 1915, having been in the thick of the fighting for some time.  It could not have been more different to “combat” against fast bowlers and spinners.  One newspaper stated that Hutchings was “the most engaging batsman of his day” when in his best form.  A wonderful front-foot driver, had he been a little more consistent he would have become a household name for years to come.

“Charlie” Blythe, who managed to carve out a spectacular career as a slow left-arm bowler in spite of suffering from epilepsy, was an extremely popular figure, cheerful and uncomplicated.  One of his finest performances was to take 17 wickets in a day at Northampton, while in his 19 Test matches, home and abroad, he earned 100 wickets at 18.63.  At Headingley in 1907 he schemed his way to 15 wickets for 99 against South Africa, having taken 11 wickets in the Cape Town Test just over a year previously.  Neville Cardus, whose imaginative writings garnished the images of so many cricketers of those times, described Blythe after analysing his bowling technique: “He was talking and laughing with a player of the Kent side, [Jim] Seymour, who used to hold, and sometimes to miss, his slip catches.  And I heard Blythe say: ‘I’ll ’it yer on top o’ the nose in a minute.’  It was a shock, because a boy’s romanticism is always snobbish.”

A family man, born in Deptford, Blythe had joined up after making it clear that he would not be playing first-class cricket again.  He hoped to become coach at Eton.  He crossed the Channel with the 12th Battalion of the King’s Own Yorkshire Light Infantry in September 1914.  Following three years of service at the Front, with slaughter occurring all around, Blythe’s fate was sealed at Passchendaele, when shrapnel pierced his chest.  Nearby, Claud Woolley, a brother of the great Frank and an all-rounder for Northamptonshire, escaped the blast.  Blythe’s wallet and a photograph of his wife were ripped in his tunic.  The grief was widespread and long-lasting, for there was never a more popular cricketer.  An imposing monument to Blythe is to be seen at The Spitfire Ground, St. Lawrence, Canterbury. This article was compiled by historian David Frith as part of ECB’s Cricket Remembers campaign.

The image at the top of this article is part of the charity Remembered’s nationwide project, There But Not There.

Go Tec Nursing to continue their sponsorship of Kent Cricket