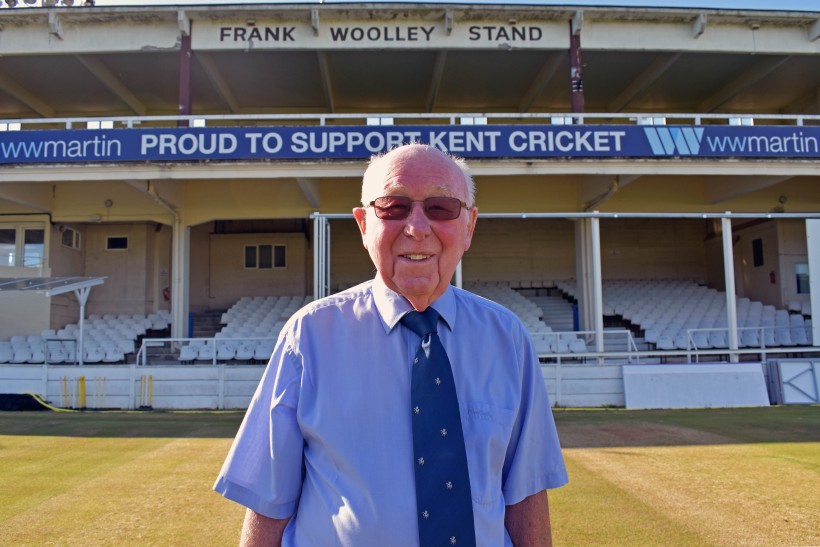 The club’s Honorary Curator, David Robertson, has been appointed as an Honorary Vice President of Kent Cricket when he leaves his current role at the end of the season.

Appointed Honorary Curator by the Kent Cricket Committee in July 1999, David has curated the club’s memorabilia and researched past Kent players to continue to grow the club’s knowledge of its early and modern history.

Kent Cricket CEO Simon Storey said: “David has worked tirelessly over the past 20 years to preserve, archive and curate the club’s historic collections, as well as keep records on Kent’s players since 1870.

“A hugely popular member of staff, David’s expert knowledge on all things Kent Cricket and his infectious passion for this club has been hugely invaluable for everyone working at Kent Cricket for the past twenty years.”

We sat down with David to discuss his life as an avid Kent supporter and his time as Honorary Curator.

When did you first support Kent Cricket?

“I attended my first Kent match in July 1946 at The Mote, Maidstone.

“I was part of a group from our school at Rochester. Kent’s opponents were Middlesex who at that time were a very strong side that included Denis Compton, Bill Edrich, Jack Robertson (no relation!) and others who had played for England prior to the Second World War and later.

“It was the first day; Middlesex won the toss and batted, scoring 487 with Denis Compton hitting a typically cavalier style century. At the close, Kent were 26-1.

“It was not the best introduction to Kent cricket for me and my fellow school friends. But it sowed the seeds for my lifetime passion in support for Kent cricket.

“The following week saw my first visit to the St. Lawrence Ground for the opening game of Canterbury Week, traditionally in those days, against Hampshire.”

What was it like to be appointed Honorary Curator?

“I remember my appointment as Honorary Curator well as there was a letter from the then Chairman Carl Openshaw, awaiting my return from Edgbaston where I had attended the memorable World Cup semi-final.

“Australia had beaten South Africa on the last ball. The letter informed me that, subject to my acceptance the Committee would be pleased to appoint me as the Club’s Honorary Curator. It was the beginning of a wonderful twenty years.”

What have you enjoyed most about your current role?

“There have been many memorable experiences. It is always a thrill to receive gifts to add to the club’s collection.

“Last year the family of Jack Hubble, one of Kent’s many outstanding wicket-keepers, donated a bat signed by the 1906 Championship winning side, of which Jack Hubble was a member. That was something very special.

“Then, there are the not infrequent requests from authors who require background information for a biography that has to be researched, families of past players maybe going back 100 plus years and students that have chosen cricket for a dissertation.

“The research involved invariably throws up fascinating and often obscure facts about individuals and events.

“On a stormy early January night in 2005 Kent’s legendary lime tree met its end. The media interest at home and from cricket nations worldwide was intense for a period of days.

“It was an enormous privilege to be involved, with media and “down the line” interviews not just in the UK but with other countries. It was suggested that I might write a history of the Tree which was published twelve months later. Not a great work of prose but another happy and rewarding experience and a small but important addition to the Club’s history.

“Everything I have done over the last twenty years has been an enjoyable and rewarding experience.

“But if I were pressed to identify one thing I think I would say that working with a team of friendly, helpful and understanding people from whom I have always received great support would be my happiest and most abiding memory.”

What are your favourite parts of Kent Cricket’s collections?

“There are two pieces of memorabilia that have thrilled me for different personal reasons. Both experiences came in my early time as Curator.

“The first was to discover, when going through the Club’s archive of scorebooks that we had in our possession, the one that recorded the first (and only) first-class triple hundred, scored here at Canterbury in 1876 by W.G. Grace, playing for MCC against Kent.

“It remains to this day the highest individual score on the ground and is a unique piece of memorabilia.

“The second is an engraved silver paper knife that belonged to Frank Woolley. It was traditional for the Club to present a memento to players who had appeared for the County during successful Championship years and this item was presented following the team’s success in 1913.

“Frank Woolley gave it to the well-known cricket writer and broadcaster, E.W. (Jim) Swanton and when Jim passed away in early 2000 his family presented it to the Club.

What does the future hold for you as an Honorary Vice President?

“My membership of Kent County Cricket Club goes back to 1947. The role I have had with the Club in the last twenty years has been an enormous privilege and a great pleasure.

“The honour of appointment as a Vice-President is something I will treasure for my remaining years of supporting Kent Cricket. And I am looking forward, with my very supportive wife Gill, to watching Kent’s talented players win a trophy or two in the Club’s 150th year.”