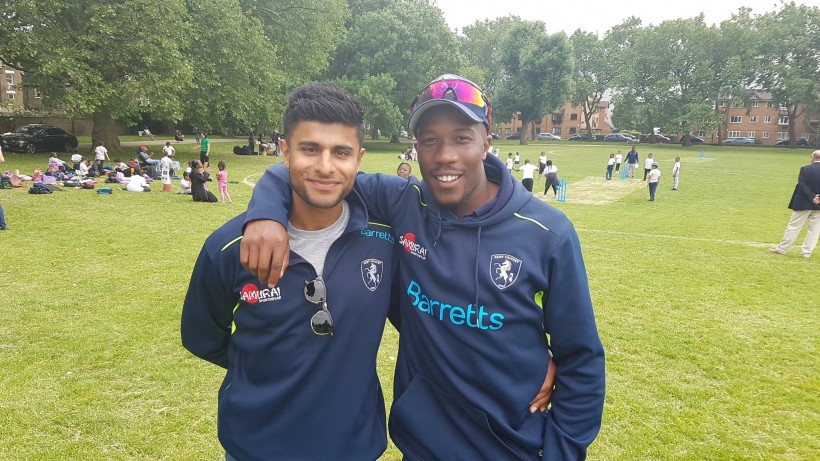 Kent opener Daniel Bell-Drummond has launched a grassroots cricket project to take cricket into schools in South East London, where he grew up and made his first steps in the game.

The Platform programme was set up by the Lewisham-born opener to boost participation in the borough, enlisting former clubmates at Catford Wanderers and Blackheath as well as Kent team-mates Imran Qayyum and England internationals Michael Carberry and Tymal Mills as ambassadors.

The coaches work with 14 primary schools and run weekly after-school sessions in Deptford Park as well as a festival with more than 400 children aged 8 and 9 taking part.

Growing the game in urban areas is a hot topic in cricket at the moment and the 24-year-old, who earned a scholarship to Dulwich College and Millfield School through his prodigious talent, wants to give children the opportunity to play and enjoy the game.

The Kent Cricket Academy graduate said: “I’ve always wanted to start something up for many reasons, but, first and foremost I just wanted to try and help people – I wanted to give back.

“I know a few people look up to me in the Lewisham area and helping people is one of my passions, so I thought why not set up the project?

“There’s more impact on people if you’re a current player and if I can make a difference now, while I am playing, then why not? Even if it’s small, if it can get more people playing club cricket it can only be a good thing, but I just wanted to get into it early.

“At our open Wednesday sessions at Deptford Park there are about 30-40 kids who turn up so it just shows that there’s a lot of keen kids – we’re just trying to make sure they have the backing, facilities and the push to be able to play and have fun – all are welcome to join.

“I am maybe the only current professional player from Lewisham and have been for a while – when I grew up there wasn’t really any cricketers around me from the same area.”

The England Lions batsman, who captained the MCC in this year’s Champion County match in Barbados, said: “In county cricket there aren’t many people like myself from Afro-Caribbean backgrounds or even those from inner London, so it definitely touches close to home to try and make a difference.

“Cricket in Lewisham is not a big sport and we just want to raise the awareness and get people playing the sport as much as possible as it can only help Lewisham.

“Lewisham has its problems like everywhere else, but cricket has many avenues – it can help young people socially, mixing with other people – I’ve met most of my good friends throughout the world through cricket.

“Through cricket they’ll definitely make good friends, learn good habits and get good life lessons, but if we can get kids in the system playing for Lewisham then that’s only a positive.”

The regular players at the Platform sessions have formed a Under-9 team called Deptford Dragons and there are plans to expand provision in 2019 to cater for schoolchildren in Year 4 and Year 5.