After several months of planning, navigating the route between bubble restrictions, pre-season training, university commitments and the official launch of Vitality Blast, we made it. All of the cogs were aligned…

You might remember that in November 2021, Bysing Wood Primary School (Faversham) were recognised as ‘Chance to Shine – School of the Year’. Being praised particularly for their ‘excellent commitment to the programme’ and ‘enthusiasm to build and develop new opportunities for the pupils through sport’.

Whilst two members of staff were able to travel to Lords to receive their trophy, logistics prevented any of the children being able to join the celebration. So we decided that they deserved a special reward of their own.

Throughout the morning, both Joe and Megan visited each of the four classes that took part in the Chance to Shine programme in their classroom. Taking with them the Vitality Blast trophy, the Women’s London Cup Shield and Megan’s medal from her time with the Oval Invincibles, the first ever winners of The Hundred.

Both players shared information about how they became involved in cricket as a child and the highlights of their careers so far, before opening to questions from the floor. The children were keen to find out things like,

As well as tackling some of wider but still important issues such as, 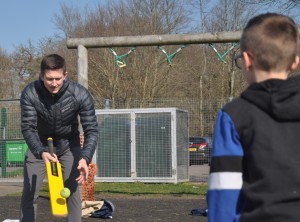 In case you were wondering, Joe opted for corn on the cob, whereas Megan opted for broccoli, preferably in a pasta dish.

As the question and answers session was drawn to a close, the children were able to inspect the silverware and pose for photos.

To round off the visit, Joe and Megan popped out to the playground during the school lunch break to test the children on what physical skills they had picked up from their Chance to Shine sessions. All in time for Joe to be back at The Spitfire Ground for the afternoon of pre-season, and Megan to get back to her studies!