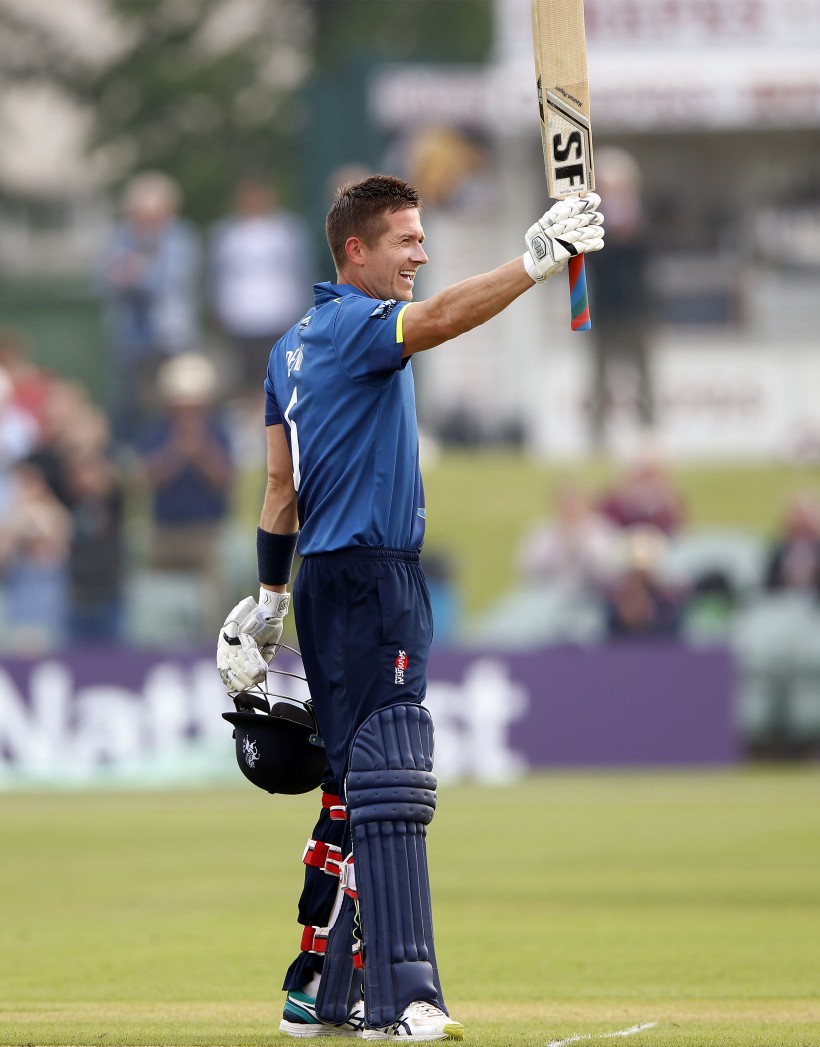 Joe Denly starred with ball and then bat with a club record 150* to lead Spitfires to victory in the Royal London One-Day Cup against Glamorgan at The Spitfire Ground, St Lawrence.

Denly collected four for 56 with his burgeoning leg-spin to restrict the winless Welsh side to 274, then picked up his bat to hit an unbeaten 150 from 143 balls to ease his team to their first South Group success.

The Spitfires lost openers Daniel Bell-Drummond and Zak Crawley but recovered to chase the target with 11 balls to spare.

No sooner had Spitfires posted their 100 when Heino Kuhn ran himself out. The South African signing slipped when backing up and was sent packing by Graham Wagg, the bowler, who struck with a direct hit to the non-striker’s end.

The pair added 88 in 12 overs, a Kent fifth-wicket record for List A games against Glamorgan, with Denly as the major aggressor.

Having picked up ducks in his first two One-Day Cup innings of the summer, Denly cantered to a 105-ball century, reaching three figures with a six over mid-wicket against spinner Andrew Salter to go with is 13 boundaries.

Blake’s 37-ball contribution worth 41 ended when he flashed hard against Timm van der Gugten to be caught behind, then, with 21 needed Darren Stevens was next to be hoodwinked by Wagg’s slower, off-cutter that pegged back off stump.

Denly stood firm throughout, steering his side over the win line with his 19th boundary to beat his previous List A record score of 115 set against Warwickshire at Edgbaston in 2009. It was also Kent’s highest ever innings in 50-over cricket, beating Darren Stevens’ 147 against Glamorgan in Swansea last season.

Fielding first after winning the toss, Kent’s leading wicket-taker Matt Henry nipped one back up the St Lawrence slope to trap Aneurin Donald leg before, but otherwise Kent’s new-ball bowlers struggled to contain Nick Selman, who unfurled a series of crisp drives that helped the Welsh county reach 47 for one at the end of their batting powerplay.

The Spitfires’ first-change pairing of Stevens and Calum Haggett combined to stem the flow of boundaries, but Selman continued to manoeuvre the ball around nicely on the way to his maiden List A half-century from 66 balls and with six fours.

With the field spread, Glamorgan’s Australian second-wicket pair of Selman and Shaun Marsh found boundaries harder to come by and were content to nudge and nurdle to rotate the strike in taking their side to 114 for one at the innings mid-point.

The introduction of Denly’s leg-spin urged Marsh, the winner of 32 Test caps, to try and move up a gear but, with his score on 45, the left- hander drilled to long-on where Henry parried the ball before diving from behind the rope to complete the catch and end a stand worth 102 in 23 overs.

Colin Ingram upped the tempo with a six off Mitch Claydon that sailed onto a balcony of a retirement apartment, but Denly won Kent’s revenge, having the Glamorgan dangerman caught on the deep mid-wicket boundary.

Henry pocketed another fine catch in the deep, running around at long-off to take a David Lloyd skier off Denly, then Claydon returned to clip Selman’s off stump with an off cutter with the right-hander eight short of his first List A ton.

Denly bamboozled Chris Cooke with a shooting top-spinner, Salter lost leg stump heaving across the line to Claydon, Henry had Smith caught at extra cover, van de Gugten edged behind to give the Claydon a flattering third and Wagg (49) holed out to ‘cow corner’ off the deserving Haggett.

The next home One-Day match at The Spitfire Ground is against Somerset on Tuesday 29 May (2pm).

There’s also a double-header at The County Ground, Beckenham against Surrey (Friday 1 June) and Gloucestershire (Sunday 3 June). All matches start at 11am unless stated with gates opening an hour before.