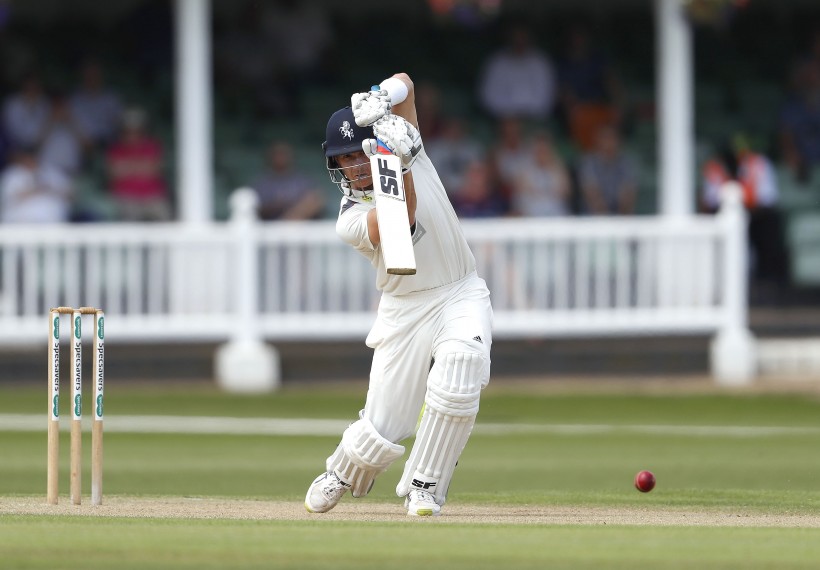 Denly showed all his class by reaching his second Specsavers County Championship hundred of the season.

The 33-year-old put on 206 with Daniel Bell-Drummond, who scored a magnificent 94 of his own, as Kent approached first-innings parity.

The Denly and Bell-Drummond axis was the perfect encore to Darren Stevens’ 23rd first-class five-wicket haul, as the veteran had dominated the morning session with three wickets.

Stevens, who is 43 and playing in his 24th Championship campaign, followed up his two wickets with the new ball on the previous evening to prevent Hampshire from collecting maximum batting points.

Resuming on 340 for six under overcast skies which cleared throughout the day, Lewis McManus targeted the third man area with a number of early boundaries.

But the hosts could only score 69 runs in 19 overs as they somewhat slumped to 409 for nine before they declared.

Stevens had McManus caught behind for a well-made 49, before Kyle Abbott and Mason Crane departed in successive balls the former lbw and the latter caught at first slip.

The all-rounder ended with figures of five for 68, and took his first-class career tally to 491 scalps.

On a flat wicket, Kent never appeared in too much trouble and wickets came out the blue.

Abbott managed to get one to nip back to Sean Dickson, who was LBW without playing a shot, in the 13th over.

Jordan Cox, on debut, was dropped on 18 at first slip by Ian Holland but only scored nine more runs before he edged Keith Barker behind.

But from then on Denly and Bell-Drummond scored runs at a steady rate, flirting at almost five runs and over throughout.

Canterbury-born Denly’s fifty came in 74 balls and his hundred, almost in the blink of an eye, arrived in 144 balls – with a two down to fine leg.

Denly, who passed 11,500 first-class runs in the innings, scored the majority of his 18 boundaries with attention-grabbing drives.

The one-time Denly was put in much danger was to a Crane delivery which spat across him, taking his edge, but stayed too low for McManus to get his gloves to.

Kent all-rounder Darren Stevens said: “We are in a strong position although we are disappointed “Deebz” got out there – he deserved a hundred.

“Joe was an angry man last week but he is in good form.

“The hundred at Tunbridge Wells got him going for the summer and we all know how good a player he is. Fingers crossed he gets that big call-up.

“I told him he can bat all day tomorrow if he wants. He’ll need to start again in the morning to help put more runs on the board and build a nice lead.

“Some balls misbehave a little bit and they’ve got the ball to reverse so it might be a challenge but the pitch is placid.

“Early season I didn’t get my rewards despite bowling nicely but thankfully the boys at the other end like Podders have done their job.

“I was frustrated but the last few weeks I have been doing the same as all year and it has been going my way.”

Late breakthroughs on Day One