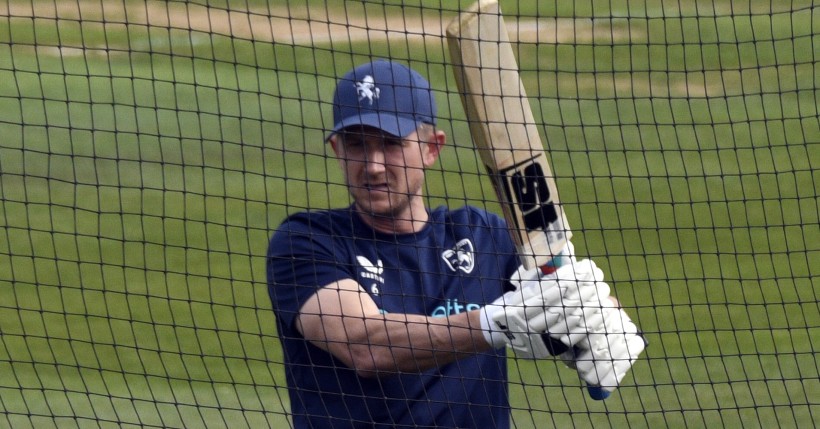 Joe Denly will lead the Kent Spitfires in this year’s Royal London Cup, as the county looks to end the 2022 season with a second trophy in as many years.

The mood in the camp is high ahead of Tuesday’s opening fixture at Worcestershire, & Kent feel they’re in a position to have a proper tilt at the 50-over contest this season.

“We’ve got very good squad,” Denly said. “We’ve lost a few players to The Hundred but I have to say across all counties, so has everyone.

“I’m excited about the squad and of course the end goal is to get as far as we can, and maybe get that trophy.

“My message to the lads is quite clear, it’s the old cliché about just worrying about who’s in front of us and that starts tomorrow at Worcester. Hopefully we can get a roll and get a few wins under our belt.”

Morale was also boosted by Kent’s dealings over the weekend. The blow of learning that Matt Milnes was leaving for Yorkshire was cushioned by the news that 20-year-old all-rounder Joey Evison was joining from Nottinghamshire, while Men’s Captain Sam Billings & all-rounder Grant Stewart both signed long-term contract extensions.

“When you sign a quality young player like Joey, that’s a lift for everyone I think,” Denly said. “Everyone at the club’s excited about it.

“I spoke to Joey the other day to welcome him to the club and he’s excited as well. I don’t think Notts would have wanted to let him go as he’s one of the brightest young players in the country, so to have him want to come to us and for us to be able to get him is a real positive. That’s the kind of player you want and to bring in players like Joey and hopefully one or two more, shows the future’s looking bright.”

“Sam signing a new contract and committing to the Club is also massive. He’s a fantastic leader and he’s a very passionate Kent man.”

Billings isn’t, however, available for the Royal London, which means Denly will be taking charge. The right-hander is enjoying something of an individual revival in the second half of this season, having returned from injury to make match-winning centuries against Middlesex in the Vitality Blast & Warwickshire in the LV= Insurance County Championship.

He joked that being made skipper would also allow him to bowl more. “I really enjoy the bowling part of it, it adds another strength to your game, doesn’t it?” he said. “Especially on one-day cricket and T20 cricket, I think leg-spin is a real handy weapon to have and I’ll be captain, so I’ll be looking to bring myself on whenever I want!

“But no, look I’ll be looking to certainly score lots of runs for the team but also chip in with a few wickets and do a job with the ball, that’s for sure.”

Denly was rested for Sunday’s win at Suffolk, but has already made a full recovery from the hamstring injury he suffered in the field at Essex on the second day of the season: “It couldn’t really have come at a worse time and it was disappointing to miss such a chunk of the season, but as it happens the lads in the batting order played really well and I found myself not being able to get back in the red ball team, so I had to bide my time really.

“It was frustrating, especially on the back of last year, which was a very poor year by my standards. I was desperate to get this season going and put that right. I felt in pretty good touch pre-season and was really excited to get going so it was a bit of bad luck that the hamstring went second day in, but I feel in pretty good touch now so hopefully I can finish the season really strongly.”

If that was a harsh assessment of a campaign during which his bowling proved pivotal to Kent winning their first trophy since 2007, success in last year’s Vitality Blast came at a price for the Spitfires.

All 11 players who starred in the Twenty20 quarter-final win over Warwickshire were unavailable for some if not all of last year’s List A competition, during which Kent won just once & finished bottom of their group.

This time round the picture is much clearer & while seven players are unavailable, both Denly & Alex Blake are available again, & overseas guns Navdeep Saini & Matt Henry can play in at least some of the competition.

Billings is one of the absentees, but Denly echoed his recent call for individuals to stand up & take responsibility for winning matches.

“There’s certainly been very good individual performances since then,” he said. “That Warwickshire game was obviously a big game in the Championship with them being quite close to us in the table, so getting to win there was a great success.

“Lancashire last week was a little bit disappointing, having got ourselves in a pretty good position after the first innings, but Sam’s right. As individuals we all need to step up of course.

“There’s still a lot to play for, hopefully if we can get a few individuals stepping up and collectively as well.”

Saini to be a Spitfire throughout Royal London Cup