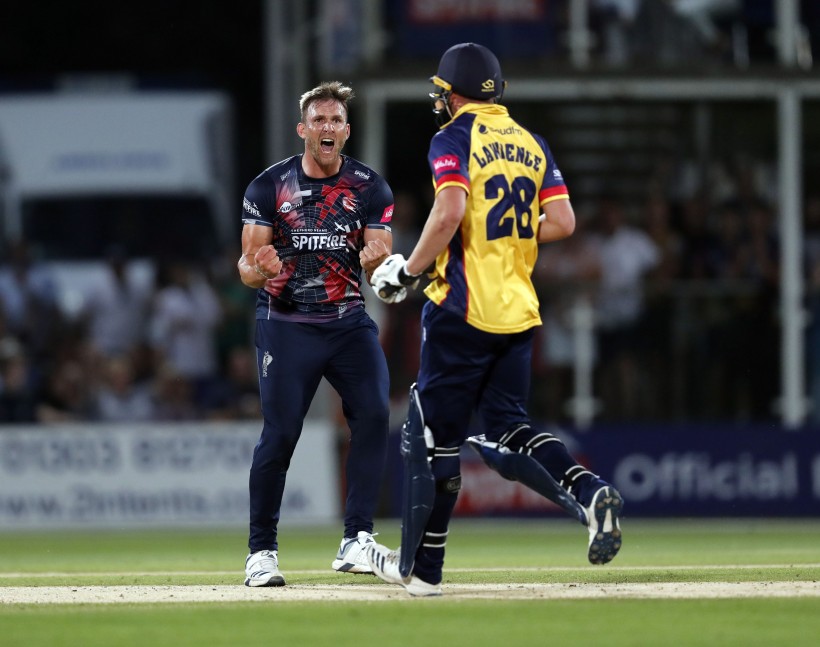 An unbeaten 55 from Heino Kuhn coupled with some wily bowling and a decent fielding stint helped ease the hosts to a third straight victory in front of their biggest crowd of the summer, a sell-out of over 6,000.

In pursuit of 176 at an asking rate of 8.8 an over, Essex lost dangerman Cameron Delport in only the third over. Having set off for a risky single to cover, the South African – fresh from his 129 of 49 balls against Surrey – was rightly sent back by Varun Chopra only to lose the race against Adam Milne’s spectacular direct hit.

Tom Westley followed in Hardus Viljoen’s next over, losing his off stump when working across the line, then Heino Kuhn held on to a stunning catch, diving full-length to his left at ‘cow corner’ at account for Chopra.

The asking rate was already above 10 an over as Eagles reached 67 for three after 10 overs when Dan Lawrence smeared across one from Viljoen to be caught at wide mid-off.

Then, when Ravi Bopara clattered an innocuous wide and short delivery from Fred Klassen to extra cover, Essex’s chase was all but run despite Ryan ten Doeschate’s valiant, unbeaten 58 – the top score of the game.

Batting first after winning the toss, Kent openers Daniel Bell-Drummond and Zak Crawley posted 51 in 29 balls before Essex removed Crawley, bowled around his legs after missing a Matt Quinn full-toss.

Crawley was replaced by Ollie Robinson, who duly launched the first six of the night over mid-wicket off the bowling of Bopara as Kent reached 93 for one at the innings mid-point.

Bopara won revenge in his next over when Robinson, in risking another slog-sweep from outside off, dragged the ball onto his stumps.

Kuhn, back in the Spitfires side having missed Kent’s opening two games under the concussion protocol, opened his boundary account with a reverse paddle against Simon Harmer and then clattered Delport back over his head for six.

Bell-Drummond was caught at deep mid-wicket for a season’s best 43 then, two runs later, Mohammad Nabi danced past his first ball, a turning delivery from Adam Zampa, to gift Adam Wheater a stumping.

With 30 deliveries remaining, Alex Blake aimed for the short, leg-side boundary only to hole out and give off-spinner Simon Harmer his sole success in a canny spell of one for 28.

With boundaries hard to come by –  Kent went 28 balls without one –  Spitfires’ rookie Jordan Cox skied to mid-wicket against, only for Kuhn to redress the balance by taking 21 off Snater’s last over to finish unbeaten with 55 from 31 balls.

The Spitfire Player of the Match, Heino Kuhn, said: “It’s a great feeling to have won three from three.

“It was a group effort again and the really nice thing so far is that it’s not been the same couple of guys scoring the runs and getting the wickets.

“It’s been a real squad effort, so we’re very chuffed.

“We have such a great line up here with some seriously good cricketers sitting out games, so every time I’m batting I feel I must score runs, which is the way it should be. It’s nice that it worked for me tonight.

“In that last over of our innings I just wanted to try and get every ball to the boundary, to find a way to get the ball there.

“He (Snater) had mid-off up and I felt that we’d all tried to hit the ball too square, to the shorter boundaries, so I set out to hit him straight, keep my shape and hit it hard as I could.

“I’m so thankful that it worked out.”

Book your tickets now to save £5 and secure your place >>>