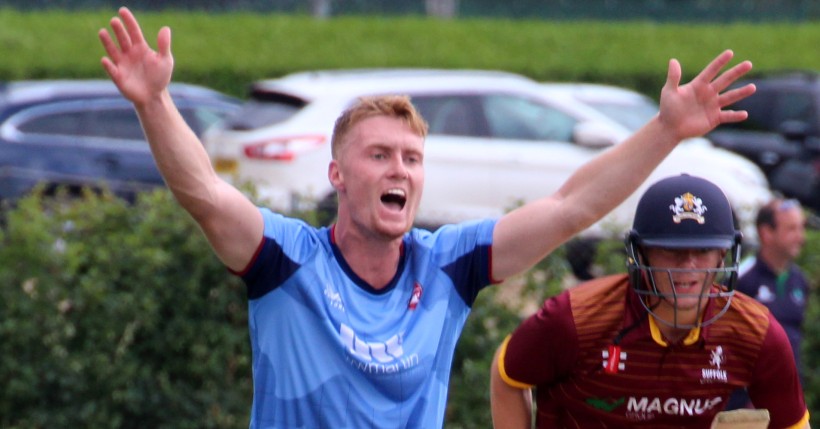 After making his full debut for Kent Spitfires away at Worcestershire Rapids, all-rounder Joey Evison is ready to hit the ground running after joining the Club on loan for the 2022 Royal London Cup, before joining permanently ahead of next season.

Evison explained he’d been lured south from Nottinghamshire by a combination of history and opportunity.

“I’ve had three brilliant years at Notts and everyone’s been really good to me,” said Evison. “I’d been at the club since I was 14 years old, but I’ll be 21 next year and I haven’t quite had the opportunities to play regular first team cricket at Notts.

“I see myself as an all-format cricketer and I didn’t see me getting into all those sides regularly enough at Notts. Kent were interested and I went down to meet the Head Coach (Matt Walker), Director of Cricket (Paul Downton) and Jack Leaning, and I had a really good feeling about it. It just felt like the best option for me moving forward.”

Less than 24 hours after finalising the move he was helping his new side to a 140-run warm-up win over Suffolk.

He scored a quickfire 15 from 12 balls down the order as Kent looked to pile on the runs and then took two for 23 as Suffolk tried and failed to chase 432. On full debut, he scored a bright 19 opening the batting at New Road in Kent’s victory.

All-rounder Evison, however, is aware there are sterner challenges ahead but senior figures at Kent are delighted to have signed someone Joe Denly described as of the brightest young players in the country.

Evison, whose idols were Jacques Kallis and Ben Stokes, describes himself as “a batting all-rounder who bowls. My bowling’s come on a lot in the last two years, but I’m a genuine all-rounder, I try to score as many runs and take as many wickets as I can. I’m a top-order batter who bowls seam.”

Having been pitched straight into the Royal London campaign he’s had little time to sort out the logistics of the move, but a number of familiar faces will ease the transition.

“I already know quite a lot of these players, like Billings, Cox and Bell-Drummond,” he said. “And I was best mates with Jordan Cox at England Under-19s, so I spoke to him a fair bit after I signed.”

“I just had a great feeling about the place. It’s a team with great history and I’m looking to thrive with the Club in the next couple of years.

“I just see this as a new adventure really, a new chapter in my life. I’m really looking forward to next three years with Kent and I can’t wait to get going.”