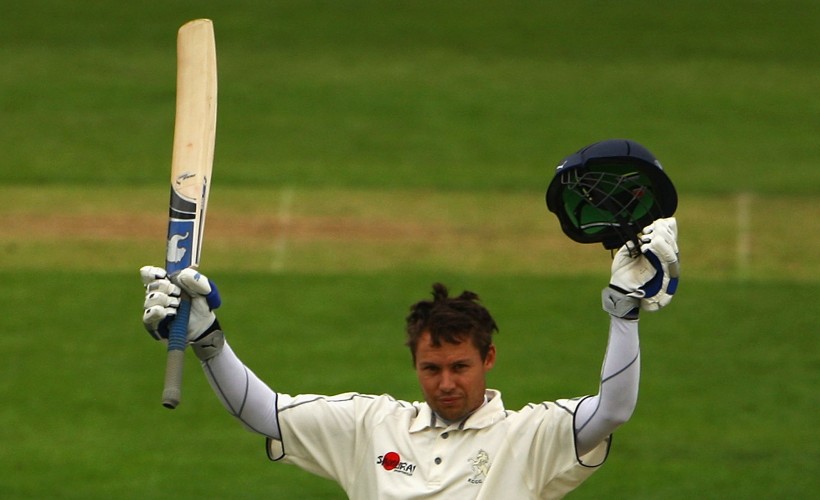 With pre-season just around the corner, the Kent Cricket website caught up with much loved wicketkeeper Geraint Jones as the players prepare to launch their promotion bid back to division one of the LV=County Championship.

Unlike many of his colleagues, Jones hasn’t been off travelling the world playing cricket over the winter break – preferring instead to work hard here in the county. However, with the players due to report back on 11 March for fitness training, the hard work continues. Here, we ask Jones about how he fairs with the rigours of pre-season:

Does it get harder the older you get?

I think it depends on what you do and how you spend your winter. If you let yourself go then yes, definitely, but I tend to keep fairly active and never lose too much condition. I can tell I’m older but, on the same hand, I know I can get myself fully ready if I work hard in the gym. When I do this, I feel good.

This time of the year Strength and Conditioning Coach Pete Kelly plays a major role, what it is like working with him?

It is certainly easier with Pete around. He sets you good programmes and is clearly a welcome introduction for us players. The training with him is very thorough and I’m feeling in good nick going into the new season.

So what keeps you going and performing to a high level?

I suppose it is pride in my individual performance, as well as the performances we put on as a team. I would say the last two years have probably been the most productive of my career. I’ve kept well and scored lots of runs. I guess the drive comes from within and I want to perform well and win cricket matches for Kent. As a team you want to win and I want to contribute and play to the best of my ability because if I do that then I know I am giving myself and the team the best possible chance of what we all want; success.

Kent look set to enter the 2011 season without an overseas player meaning a lot of emphasis is being placed in youth, shown with the recent contract extensions handed out to Alex Blake and Matt Coles. Jones believes that it is the responsibility of the senior players to guide the young players through into the first-team:

Is it tougher now with a younger playing squad?

I’m not too sure; you can look at it two ways. When I was coming through I was lucky that a lot of the experienced guys were bowlers and that helped me massively because, as a wicketkeeper, I work closely with the bowlers out in the field. Now, we have a young bowling crew and most are all fairly inexperienced – even someone like RJ (Robbie Joseph), in terms of matches played. In tough situations you need to rely on your experienced heads. Our young guys haven’t got that needed experience so they have to rely on their youthful energy and allow us older ones to steer them in the right direction.

Do you enjoy helping the younger players?

Yes, of course. I think it is part of the job for us senior players. When the issue recently came up, about not being able to sign players – and where we are financially, I was keen to play my part. I said at the time that I was really up for working hard and helping the younger players. I enjoy seeing them watching and learning and feed off it.

The gloveman, who has 34 Test-match caps and an MBE to his name after starring in England’s historic Ashes glory in 2005, is approaching his 35thbirthday but still has plenty to offer. He has passed the golden figure of a 1,000 first-class runs in the previous two summers and his keeping has been exemplary. Last season the right-hander also posted a career best score of 178 against Somerset at Canterbury. With many young players now around the St Lawrence dressing room, a move into coaching once his playing days are over would seem a natural move for Jones, but it’s something he remains coy on:

What about coaching in the future?

Well it is something that I enjoy but there is such a small window of opportunity. Lots of people want to do it and there aren’t that many jobs around but I enjoy going through things with young players. Lots of the game is about the mental side but I’m more than happy to chat things through and pass on my knowledge. I’ve been in lots of situations, over the years, and can relate to the youngsters. As players we are all professionals for a reason and have achieved in our chosen sport. You don’t need to put too much pressure on people – in fact, I think it’s quite the opposite. I believe that you need to take the pressure off the youngsters and to help them perform. The important thing is to help them develop their games and push forward.

How do you rate your new young understudy, Sam Billings?

From what I’ve seen he is young and has plenty of energy, which is important for a wicketkeeper! I haven’t seen a great amount of him but he has worked very hard over the last couple of years and is now doing good things up at Loughborough. The key for Sam is to keep developing. He will get lots of games in the second team and needs to be ready to replace me if I’m injured. I get on well with him and am looking forward to helping him. I will definitely do what I can to help him improve because that is important for the good of Kent Cricket.

There have been plenty of changes around the St Lawrence Ground over the winter period, on and off the field, with the ground redevelopment now in full-swing as the Club looks to move forward. On the playing field, Jones shares the ambitions of fans looking to bounce straight back to division one and is excited at how the county’s Canterbury headquarters are taking shape:

Is there less expectation going into this season with a younger squad?

No, I don’t think so. There is huge weight of expectation from supporters – that will always be there. They naturally want us to get promoted and go as far as possible in every competition. Supporters want success and to win trophies but I don't think it is a bad thing if we stay in the second division for a couple of seasons and allow our younger players to develop. Some of the bowlers, especially, are inexperienced so to spend at least two years in division two would, I think, help them prepare for a longer stay in division one the next time and stop us from continually floating between the two divisions. As well as thinking about things now, I am also a firm believer that we have to have an eye on a couple of years down the road as well.

Are you pleased that the ground will look better in 2011?

From my point of view, it is a big positive and it’s an issue I always raise. The new facilities are going to be fantastic and I’m especially looking forward to the new changing rooms and the floodlights. It is exciting to be a part of the future and it is nice to have great facilities but my view is that, ultimately, we are a cricket club so we should be looking to provide for the players and keep facilities high – in order to allow us to perform well. We clearly need people coming to watch us play cricket and the experience will certainly be heightened by all of the work that is being carried out.

Are you looking forward to being illuminated in 2011?

The floodlights are superb and will offer great quality. With England, I’ve played under some of the best in the world and then when you play a domestic county game, you notice the difference pretty quickly. The permanent lights make a massive difference and these ones that we are installing are the very best. The floodlights are good for both players and spectators so I’m definitely looking forward to it and hopefully it will be bring in the crowds because we want to play in front of packed arenas and hopefully floodlit cricket will help bring those days back.

The first floodlight is up