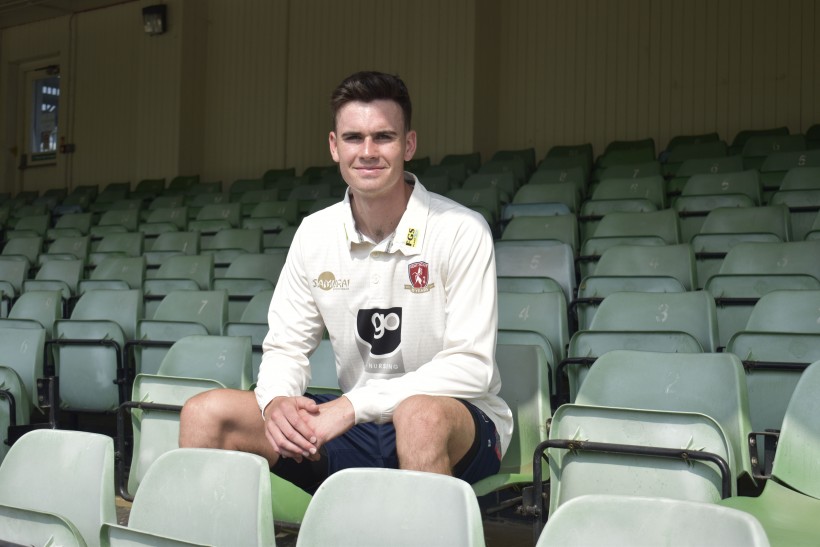 Kent young gun Nathan Gilchrist made his professional debut as a Kent player in 2020, and the right-arm quick says he has settled very well into Kent’s squad going into 2021.

Gilchrist came to Canterbury ahead of the 2020 season, moving to Kent in the in the midst of the first lockdown in spring. On his first few weeks in Kent, he said: “It was very good but very strange at the same time.

“At the beginning of the year, preparations were going perfectly to plan and I felt really good, then suddenly we had to stop and pause for three months. However, I managed to keep myself ticking over for the time being.

“Then strangely enough, coming back after the lockdown and going into the season I felt really good. A lot of lessons were learned in a short space of time. Of course it was quite a big change moving from Somerset to Kent but it was very enjoyable.

On working with his new coaching team that boasts a host of former Kent cricketers, Nathan added that: “Straight away I could see the passion in the coaches and that it really meant a lot to them to coach us, because they’ve been in our shoes.

“It’s one of the nicest things that we’re able to relate to a coach that much, because they’ve been in our shoes before and they know what it’s like to be a player here, especially with the challenges that brings.

“From day one the coaches welcomed me really well, as well as the players, so hopefully we can take this positivity into 2021.”

Gilchrist made his Kent debut away at Surrey in August, something that the 20-year-old hailed as an “amazing experience”.

“To make my debut was something I’ve dreamt of doing since I can remember. It was quite a big moment for me on that first morning walking out onto the pitch at the Oval for warm-ups and I can still remember it very clearly.

“In all honesty I didn’t realise how big the rivalry was between Kent and Surrey before I got here and played in that match! I loved playing at the Oval, knowing all the former cricketers that have played and done well there. I definitely learnt a lot in a short space of time over those four days.”

He scored 25 runs in his first innings as a professional, and says that batting is something he works hard to improve on: “I’d like to think myself of a more of a seven or eight – when I was younger I used to bat the middle order quite a lot, but then naturally my primary skill has always been bowling.

“As you go up the levels you hone in on what you bring most to the team which is bowling especially due to my height, so I’ve had to work quite hard on my batting to try get up the order and score runs too. I love batting and hopefully I can score some runs for Kent, too.”

During the Winter, Nathan has been training in South Africa, and will feature for North West University in Potchesfroom should recreational cricket return to the country amidst COVID-19 restrictions.

“I haven’t been playing any games yet, but usually before Christmas I just focus on my strength and conditioning and take a break from playing cricket. I’ve been doing a lot of running and gym work and I feel really good.

“We’re all in a WhatsApp group with the boys back in the UK and the other guys around the world, so it’s nice to be able to keep in contact with them whilst everyone’s away. When we come back together it’ll like nobody’s ever gone away, really. There’s always a lot of jokes and messing around on those groups so it’s good fun.

“Everyone gets on very well, I wouldn’t say there’s any cliques or anything at all. Living with Hamid in the few months before the season ended, we became quite close – he cooked me dinner a few times, which is nice! But I’ve got on really well with all the lads, they’ve all been welcoming, warm and friendly so it’s been very easy to get to know everyone.”

Kent get their 2021 season underway with a trip to Northamptonshire on 8th April, and Kent’s seamer is targeting a breakthrough year to come. “I’d love to play all formats for Kent, that’s the dream and the goal going forward, playing in as many formats as I can.

“I’ve been working really hard on my red ball skills as well as my white ball ones; I’d say over the last few years I’ve probably erred towards being more of a red ball bowler, but I’d love to play limited overs cricket as well.

“There’s constant work on T20 cricket these days and being a bowler is hard work so you’ve got to be ‘on it’ all the time!”

Who else is excited to see more of Nathan Gilchrist? 💪