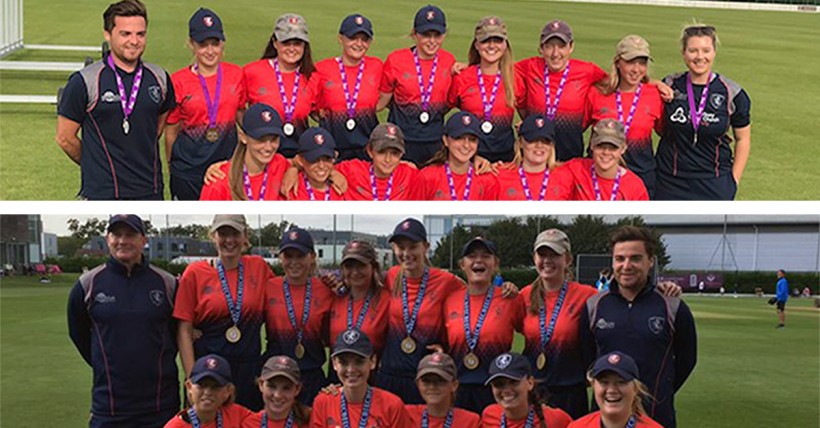 Kent Cricket’s U17 and U15 Girls age group squads were crowned National Champions in two ECB competitions this week.

The Kent U15 Girls participated in the ECB National 40-Over Final vs. Lancashire this Wednesday 21st August at Grantham CC having overcome Staffordshire in the nail biting semi-final the previous day.

With the Young Spitfires unbeaten all season and finishing top of their league table, Lancashire proved a different and big challenge, but Kent set a competitive total of 207 for them to chase in the second innings.

In the second innings, Kent’s bowling attack was persistent with special mention to spinner Darcey Carter, who took three important wickets, and to Alexa Stonehouse who helped to remove their lower order and Lancashire’s final wicket, for Kent to become National Champions.

Earlier in the week, the Kent U17 Girls participated in the ECB National T20 Final vs Lancashire on Sunday 18th August at Loughborough University.

Kent batted first and set a total of 121 for Lancashire to chase. The young Spitfires produced a fine fielding display, with four run outs, one from captain Coco Streets and three from Darcey Carter, to limit the opposition. Lancashire ended up 17 runs short, meaning Kent became the U17 Girls T20 National Champions.

The jubilant squad were then treated to a presentation during the Women’s Kia Superleague match between Yorkshire Diamonds and Loughborough Lightning, gifted their medals and trophy in the interval by England International Jenny Gunn.

Helen Fagg, Kent Cricket’s Women & Girls Community Cricket Officer, said: “What we have seen this week is the result of a huge amount of work from the players, their supportive parents and the growing team of passionate, dedicated coaches who work with the girls week in week out.

“Alongside this, we have seen the result of a commitment from Kent Cricket to continually support their female pathway alongside the men’s which sets a precedent that other counties may now look to follow.

“Huge congratulations to all involved and to Liam Cook, Nick Bier and Jenni Jackson for their achievements as coaches this season.”