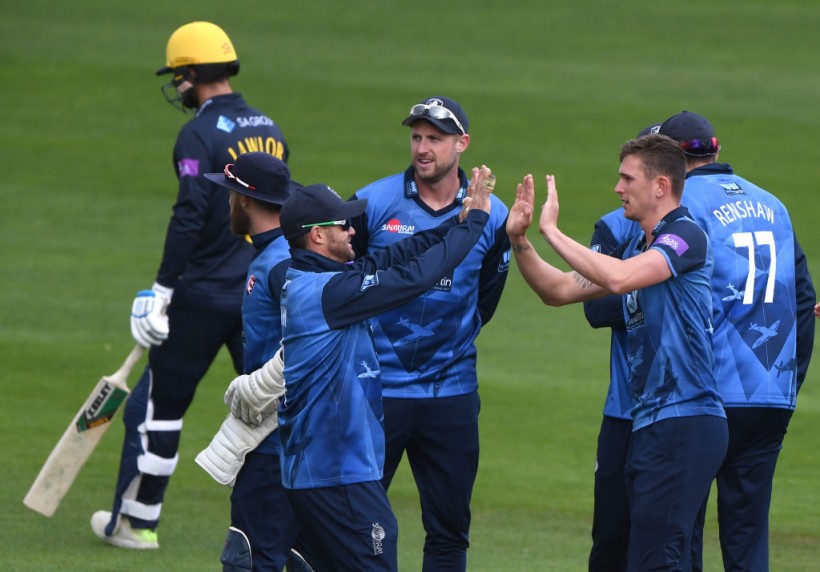 The weather got the better of the Royal London One-Day Cup fixture between Kent Spitfires and Glamorgan at Sophia Gardens in Cardiff on Thursday.

The match got underway at 11.25am, with the contest initally reduced to 49 overs per side.

After Glamorgan won the toss and elected to bat, disaster struck for the Spitfires in the second over as captain Sam Billings fell awkwardly fielding at mid-on,  suffering a dislocation of his left shoulder.

Billings was taken to hospital where his shoulder was relocated, and he returned to Sophia Gardens later in the day.

He is scheduled to see a specialist tomorrow, where he will undergo scans.

Harry Podmore struck early on after the restart, removing opener Jeremy Lawlor’s off stump for 3 and leaving Glamorgan on 21/1 in the fifth over.

The heavens soon opened and the players left the field in the eighth over, causing a first rain delay of the day.

Back on the field, Netherlands international Fred Klaassen soon continued Kent’s good start on the field, removing a dangerous looking Chris Cooke for 29 in the fourteenth over, Alex Blake taking the catch.

Just one over later, with the score on 68/2, rain started to fall heavily; the players were off again by 1:50pm and did not return. After an inspection where rain then subsequently fell again, the match was abandoned shortly before 5pm.

On Sam Billings’ injury, Kent Head Coach, Matt Walker said, “It’s another injury. You have to laugh about these things or you’d cry. It’s becoming an extraordinary situation we find ourselves in.

“I think that’s ten injuries in the last 14 days, or unavailability due to illness or injury, so at the moment we’re a little bit cursed by these things.

“Last year we had hardly any injuries but this year, we seem to have got our fair share. There’s not much you can do and not injuries you can prevent.

“It leaves us without another player which is a challenge and a half. We’ll just carry on and try to make sure the players are and stay fit and well.”