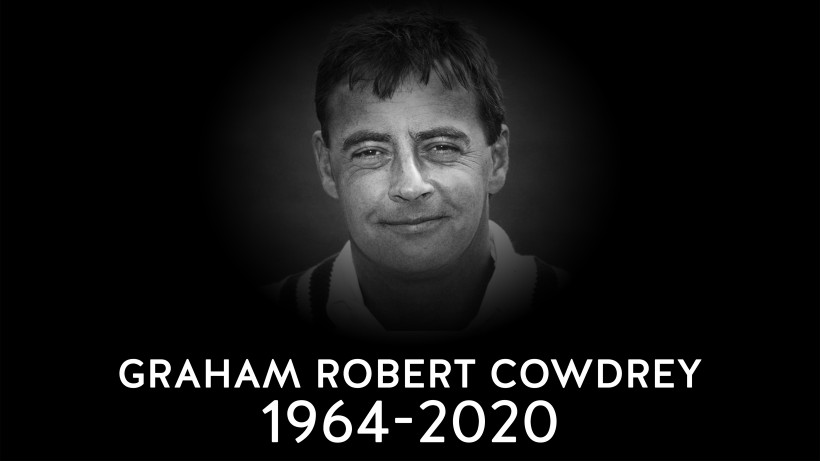 Kent Cricket is devastated to learn of the passing of our much loved former player, Graham Cowdrey, at the age of 56 after a short illness.

A right-handed middle-order batsman, Graham was a top county professional from a remarkable Kent family, with an infectious love for the game. He represented Young England before making his county debut in 1984, and for more than a decade, he was a regular member of the Kent side.

His fourteen years of service at Kent saw him represent the county 450 times across all forms of the game at the time, scoring over 14,000 runs as a batsman highly suited to the emergence of the modern one-day game.

He was awarded Kent County Cap number 169 in the Summer of 1988, after establishing himself in Kent’s middle-order.

Of his 21 centuries in a Kent shirt, Graham’s top score of 147 came against Gloucestershire in the 1992 County Championship, at the apex of a two-year run of form, that saw him average over 37.00 with the bat, with Graham helping Kent to finish as runners-up in the Championship that season.

In 1995 he averaged 53.90, scoring two centuries and scoring the highest number of runs for the county, as Kent lifted the AXA Equity & Law League trophy and were finalists in the Benson & Hedges Cup.

Graham also held the Kent record for any first-class batting partnership for 22 years, after his fourth wicket stand of 368 with Aravinda de Silva against Derbyshire in 1995, until it was broken by Sean Dickson and Joe Denly in 2017. It remains Kent’s highest fourth-wicket partnership in the Club’s history.

After being awarded a Benefit Year in 1997, Cowdrey retired from the game in 1998. His love for cricket extended beyond his playing career and following his retirement, he continued to work within the sport, most recently as a Cricket Liaison Officer for the ECB.

More than his facts and figures, Graham will be remembered for the way he played the game: his vibrant personality at the wicket or in the field, with his sense of fun as clear as his competitive passion.

Graham recently appeared on the Club’s ‘Spitfire Sessions’ alongside his brothers Chris and Jeremy earlier this year, where he discussed his “happy memories of all those days down at Canterbury, Maidstone and everywhere we used to play”.

During the live forum, his brother and former Captain Chris, highlighted Graham’s outstanding talent in one-day competitions. Stating that if he were to select his all-time Kent T20 XI, “there’s one person that I would pick first, and that would have been Graham Cowdrey. He was the most devastating striker of the ball and could turn a match in four overs.”

Graham’s close friend and former Club teammate Matthew Fleming said: “I am numb with shock and sadness that the brilliant, generous, funny and complex friend who lit up so many cricket grounds, on and off the pitch, has slipped away.

“‘Van’ as he was universally known because of his love of all things Van Morrison, was an instinctive cricketer, a game changer, who won matches with his prowess as a batsman and a fielder.

“However, it was his deep love of cricket and Kent, his commitment as a teammate, his integrity and his wicked sense of humour, his loyalty as a friend and the ‘twinkle in his eye’ that shaped almost everything he did that we will also remember with the greatest possible affection.”

The Club would like to express its deepest sympathies to Graham’s family and friends at this difficult time, especially his children, Michael, Grace and Alexander.