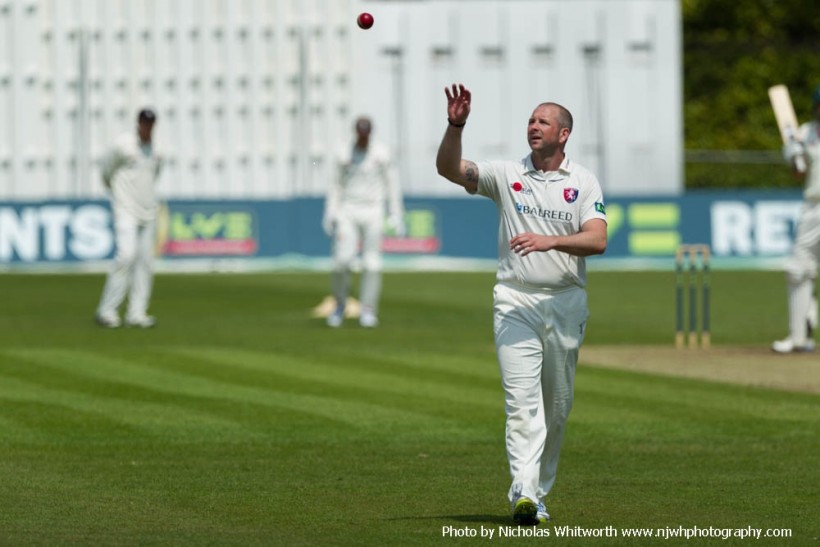 An England and Wales Cricket Board pitch panel, chaired by Tony Pigott, decided not to impose a points penalty on Kent following their ten-wicket LV= County Championship Division Two victory against Derbyshire at Canterbury.

After a two and a half hour process of interviews and discussion with the umpires, groundstaff and representatives of both teams following the end of the game, Pigott emerged to say the pitch had been marked as “below average”. In effect, Kent have received a warning only for preparing a surface that was excessively dry.

Pigott said: “After reviewing all the information we have received, from the umpires Rob Bailey and Martin Bodenham, the captains and head coaches of both sides, and the head groundsman here, we have decided there is to be no penalty.”

Jamie Clifford, the Kent chief executive, said: “I think the outcome is appropriate. There has been a very thorough review process, and I am pleased it has reached this result. It is a good example of how the process works well, and also helps us as a county to learn and understand the best way to prepare our pitches. It has also been very valuable to have Chris Wood, the ECB pitches consultant, here as part of the panel.”

Derbyshire captain Wayne Madsen criticised the dry and dusting surface for wearing too quickly, although no one from Derbyshire blamed the pitch for their defeat. On the second evening Madsen said it was “like a fourth day wicket on day two”.

Darren Stevens finished with six for 64 and Adam Riley three for 88 as Derbyshire, 32 for three overnight after being dismissed for just 115 in reply to Kent’s first innings 333, initially crumbled again to 102 for seven before Alex Hughes and David Wainwright produced an eighth wicket stand of 129 – a record for the county against Kent – to put the batting conditions into some sort of perspective.

Hughes reached a career-best 82, from 184 balls and with eight fours, before he was lbw to a nip-backer to give Stevens his ninth wicket of the match. Wainwright was unbeaten on 60 and had resisted for 125 balls when Derbyshire were eventually bowled out for 256. Kent, needing just 39 to complete victory, got there in 10.1 overs through openers Rob Key and Daniel Bell-Drummond.

Madsen was the first Derbyshire batsman to fall in front of a third day crowd almost doubled by the presence of around 1,500 local schoolchildren on a day out organised by the Kent Cricket Board as part of Chance to Shine National Cricket Week. In the seventh full over of the day he was caught at short leg for 17 from a ball from off-spinner Riley which climbed steeply from just short of the length to loop up off his glove.

Stevens, who in tandem with Riley operated unchanged for almost the entire first session, had already seen one impassioned appeal for lbw against Marcus North turned down when, in his next over, he won another leg-before appeal to send the former Australia batsman on his way for 16.

That was 57 for five, and Scott Elstone soon followed North back to the pavilion, touching a leg-cutter from medium-pacer Stevens to wicketkeeper Sam Billings as he pushed forward on 13.

The end for Derbyshire seemed to be coming at a rush when Gareth Cross, after one defiant straight six off Riley, was lbw to Stevens for 21, but Kent’s next success did not come for 40 overs as Hughes and Wainwright dug in.

There was still turn and occasional lift for Riley, sometimes extravagantly so as he continued to wheel away from the Pavilion End, but Doug Bollinger and Robbie Joseph could not follow Stevens’ lead with their own brands of seam and swing.

Hughes and Wainwright, who both batted watchfully but still managed to play a clutch of excellent attacking strokes, added 110 runs in the afternoon session – having come together six overs before lunch – and it was not until the second over after tea that they were parted.Tony Palladino and Mark Footitt soon followed, both out to Riley.

Derbyshire’s previous eighth wicket record against Kent came in 1948, at Gillingham, when Eddie Gothard and Cliff Gladwin added 83. Hughes’s previous best first-class score, of 60, was made against Leicestershire earlier this season.

Graeme Welch, the Derbyshire elite performance director, said: “The pitch started out very dry, and a few misbehaved – especially with the new ball – but we still didn’t bat as well as we should. The partnership between Hughes and Wainwright showed that. We have to start staying in games better than we are doing at the moment. It’s our first innings which is the real problem, and it’s something we have to address.”