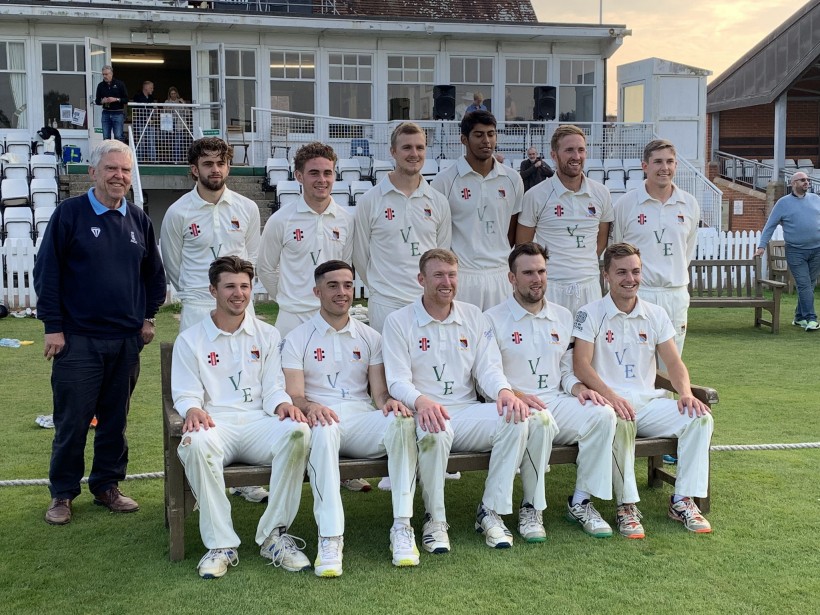 They complete a highly successful season, which also saw their Second Eleven win their Premier Division.

Bexley deserved their success, having been top of the division for most of the season. Sandwich Town, who still have a match to play, will finish as runners-up, and put up a good challenge for the title themselves taking it until the final matches.

Batting first against Wells, Bexley scored 267 for 6 from their 50 overs, with opener Calum Basey getting them off to a good start, with an excellent 83. Adam Ball was 40 not out at the end of the innings.

Ball then took 3 for 28 with his left arm medium pace, and Riley 2 for 35, as the home side were bowled out for 176. Singh and Shaun Evans also took two wickets apiece to seal the championship winning victory.

Sandwich had a very comfortable seven wicket success away at Lordswood, the home side slumping to 120 all out, and the visitors knocked the winning runs off in 21.5 overs, 121 for 3, but they knew their win in the end would not be enough, if Bexley also won their match.

After just one season in the top division, Bromley were relegated, after losing at home to Blackheath, by 92 runs. A brilliant spell of bowling by Tanwar Sikanda, 5 for 15, destroyed the Bromley innings, 156 all out, replying to Blackheath’s 248 for 8, Mahi Mahfusul 63, Nick Abbott 4 for 48.

Beckenham beat Bickley Park at home by four wickets, scoring 145 for 6 in reply to the visitors 143 all out. Daniel Magin, with 35, top scored for Park, Shohib Ali, 3 for 28, and Alex Senn, scored 34 for Beckenham, with Kent Second XI player Elliott Hooper taking 3 for 17, but finishing up on the losing side.

Holmesdale beat Sevenoaks Vine by seven wickets in their home encounter, but disappointingly it was not enough to save them from relegation. Vine made 206 for 8 from their 50 overs, and the home side knocked off the winning score, 207 for 3, in 33.4 overs. Will McDowall, scored 84 for Holmesdale, and Carlos Maynard 81 not out. Miles Richardson was unbeaten on 70 for The Vine, and Michael Cowdrey made 52.

Although they still have matches to play, Minster (Sheppey) and Hayes look set to be promoted from Division One, after they both won their games. Minster were involved in a close battle at home to Folkestone, winning by five runs, in a high scoring match, whilst Hayes, had a comfortable nine wicket win at relegated HSBC (Kent).

Minster scored 290 all out in their innings, with a century, 112, with sixteen fours and a six, from their skipper James Thompson, and 56 from Edward Moore. Kane Wheeler, 4 for 62. The fact that the visitors got so close was due, almost entirely, to a brilliant knock of 157, with 20 boundaries and six sixes, by wicket-keeper Jacob Miltz, the next highest scorer, Shazil Malik, getting 39. Harry Mawson 3 for 25.

HSBC scored a paltry, 61, in their innings, with none of their batsman getting into double figures. Former Kent Second Eleven player, Will MacVicar, took 4 for 21, and Kent’s Alex Blake, did not have to bat, as Hayes knocked the runs off in 11 overs, 62 for 1.

The other relegated side, Sidcup, went down by six wickets, away to Canterbury, at Polo Farm. The visitors could only reach 172 for 8, Mat Kilbey scoring 104 of their total, with 11 fours, to carry his bat through the innings. Ben Rutherford and Ewan Munday, two wickets each. Jarryd Taig scored 77 for the home side, and Kent Second team all-rounder Jarred Lysaught, was 43 not out as Canterbury reached their winning 175 for 4 total.

St Lawrence and Highland Court were 13 run winners, at Linden Park, in a low scoring match. After only making 127, themselves, they then bowled out the home club for 114. Harrison Pack, with 29 top scored for the visitors, Roshan Jayatissa 3 for 16. Paul Seldon hit 41 for Park, Joe Payne, taking 3 for 8.