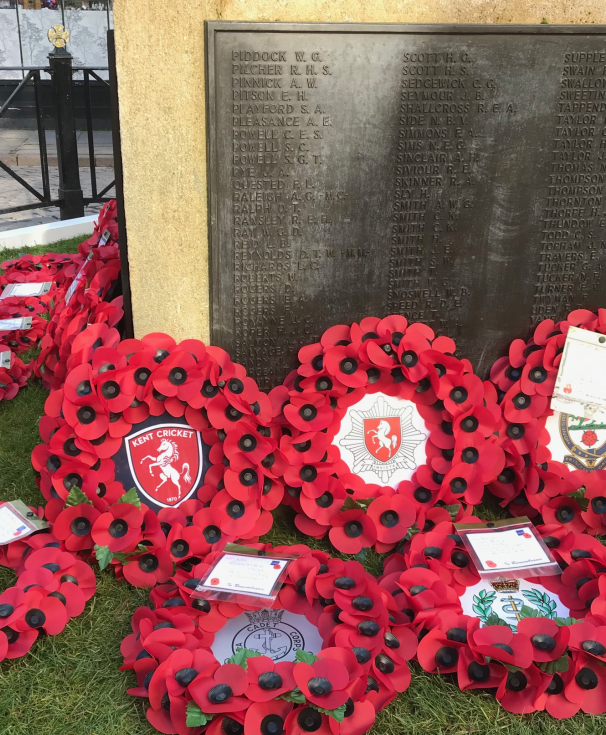 Each year, Kent Cricket honours those who paid the ultimate sacrifice in all conflicts. Today, Kent Cricket’s CEO, Simon Storey joined representatives and dignitaries across the city of Canterbury to pay their respects at Canterbury Cathedral, which followed the wreath laying ceremony in the Buttermarket.

On Monday 11th November, Kent Cricket staff and officers from the Princess of Wales’ Royal Regiment will come together to hold its annual Remembrance Service. This will be held at the Colin Blythe Memorial within The Spitfire Ground, St. Lawrence, where staff will lay a wreath at the memorial at 11am. Members are welcome to join staff at the ground to observe a two minute silence to remember all Kent Cricketers who died in the First World War and to mark 101 years since the end of the First World War.

County Cricket was suspended between 1914 – 1919, and at least 210 cricketers served in the First World War. As we reflect on Kent Cricket’s tragic loss of life during the First World War, below is an extract from this years’ tribute to the fallen in “the Great War” which features Kent Cricket’s association with a particular unit, the now inactive Kent Fortress Royal Engineers.

“Colin Blythe, Henry “Harry” Preston and David Jennings all missed Kent’s final game of the 1914 season against Hampshire at Dean Park in Bournemouth after enlisting. They were later joined in the KFE, a volunteer Territorial Army Unit, by their teammate, Bill Fairservice. All four aforementioned, had been part of Kent’s County Championship winning sides of 1909, 1910 and 1913.

In October 1914, they were posted to the Woodlands depot in Gillingham. According to the Tunbridge Wells Advertiser, who sent a reporter to see them off, Blythe was the “life and soul of the party”. Promoted to Corporal at the end that year, and Sergeant in 1915, Blythe remained at Gillingham for two years with 2/7 Reserve Company working on coastal defence and construction tasks.

Whilst at Gillingham, Blythe, along with Fairservice, was involved in the formation of the Kent Fortress Engineers cricket team, which, with seldom fewer than four county cricketers, proved too strong for local opposition.

In their first game, when a Royal Engineers side was beaten by an innings, he took 3/33 & 4/3, followed by 7/36 against a South African Eleven at Gravesend. Blythe also had match figures of 14 for 85 v Chatham Garrison.”

Simon Storey, Kent Cricket’s CEO, said: “It is important for us to recognise and pay our respects to those who never returned home after paying the ultimate sacrifice.

“We must continue to reflect and uphold a tradition to educate future generations, understanding that none of us would live the life we do today without the sacrifice made by previous generations.

“We Will Remember Them.”

Jones fired up for future career