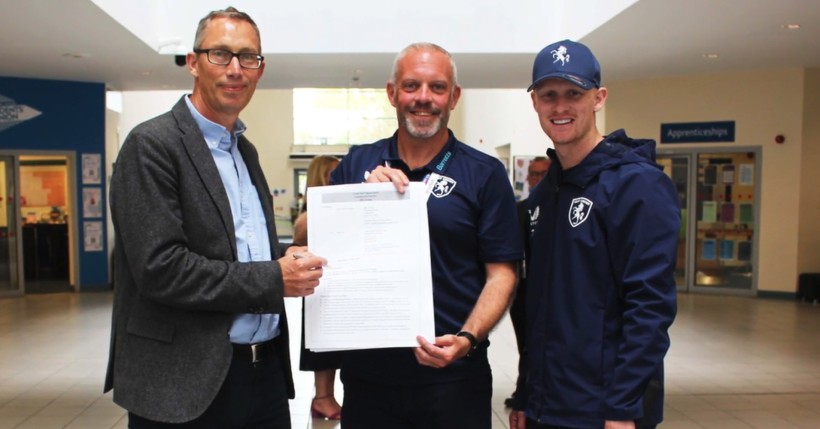 Education organisation EKC Group has signed a major new partnership agreement with Kent Cricket which will see it become a ‘community partner’ for the Club over the coming three seasons.

The Group – which has colleges in Ashford, Broadstairs, Canterbury, Dover, Folkestone and Sheppey – inked the new deal over a round of ‘street cricket’ in its Canterbury College’s atrium, with Chief Executive Officer, Graham Razey, facing down cricket star Jordan Cox and Kent Cricket’s Director of Partnerships Andy Griffiths. Students from the College’s sports department also got in on the action, taking to bowling against the top-flight Kent batsman to seal the deal.

The partnership will see EKC Group and Kent Cricket collaborate to open up access to cricket for a new generation of young athletes, helping to ensure the sport is nurturing the fans of the future. The county’s leading sports organisation will offer up an education programme, deploying its top talent into the Colleges to speak with students as part of the deal.

Kent Cricket’s Director of Partnerships, Andy Griffiths, said: “We’re delighted to link up with EKC Group in an exciting partnership that will look to benefit everyone in our local communities.

“It was fantastic to see so much engagement from students at Canterbury College when they had the chance to bowl at Jordan Cox and play some softball cricket in their hallways, and I’m sure that enthusiasm will shine through as we both work together in the next three seasons.”

Chief Executive of EKC Group, Graham Razey, said: “Our Group hopes that this partnership will introduce even more of our students from across East Kent to the power of team sports, and cricket in particular.

“I’m hopeful that this new relationship will break down barriers for the thousands of students within our Group who will get the opportunity to engage in cricket and benefit from the many opportunities that working with this great Kent organisation will bring .

“We’re excited to be aligning ourselves with an organisation that shares our Group’s values, and I look forward to seeing this relationship develop as we move through the next three seasons as a Community Partner of Kent Cricket.”