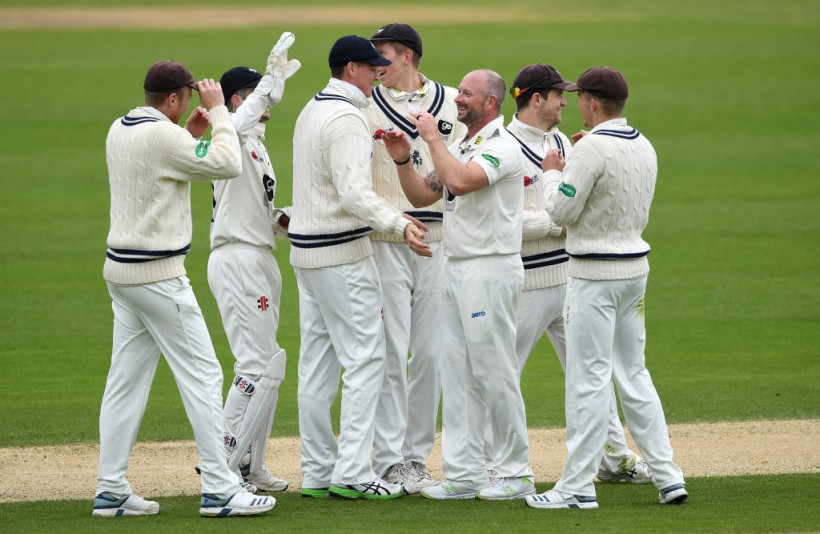 Kent completed a commanding eight-wicket win over Warwickshire in the final session of their Specsavers County Championship Division One clash at Edgbaston.

But after they were separated, just before tea, the last three wickets fell in 22 balls to leave Kent a victory target of 123 in 31 overs. Harry Podmore finished with five for 62 to harvest match-figures of eight for 123, a highly impressive return on a very good batting pitch.

Kent eased to 124 for two to complete their first victory in Division One of the championship since 2010.

Their strong performance was the perfect response to the disappointment of defeat to Somerset in their opening game at Taunton.

For Warwickshire, it was a chastening start to the season. With a squad in transition, and further hit by injuries which ruled out Olly Stone, Chris Woakes, Ian Bell, Liam Norwell and Aaron Thomason, they faced an immediate examination of their squad depth and struggled to cope.

The home side resumed on the final morning on 79 for four, still needing another 79 to avoid an innings defeat, and soon lost Sam Hain (38, 73 balls, five fours) who edged a superb ball from Podmore to wicketkeeper Ollie Robinson.

After Tom Milnes fell lbw to Darren Stevens and Podmore produced another fine delivery to pin Craig Miles in front, Warwickshire were seven down, still 37 behind and Kent were scenting victory by an innings.

But Ambrose and Brookes batted with composure and patience against an attack which began to look understandably tired.

Brookes passed his previous career-best of 70 before Ambrose reached his eighteenth first-class century, from 191 balls with his 15th four. The pair were just taking their side within touching distance of safety when, four overs before tea, Kent made the vital breakthrough.

Milnes trapped Ambrose lbw with an in-ducker that kept a little low after which Podmore immediately followed up by removing Jeetan Patel lbw and Milnes won another lbw decision, against Brookes.

Left with a victory target of 123 in 30 overs, Kent lost Sean Dickson, lbw to Brookes, in the second over, but first-innings century maker Zak Crawley (45, 40 balls) and Matt Renshaw (48 not out, 50 balls) added 80 in 67 balls to make light work of the small target.

“I am very proud of the guys. It was very much a concrete performance with the bat, very clinical, which is something we have been working on a lot. They were really good hundreds from Zak Crawley and Ollie Robinson and I am very chuffed for those young guys.

“Taking 20 wickets on this pitch was a fantastic effort. Getting here on the first day I don’t think I have ever seen a pitch that good at Edgbaston, as hard and brown covering of grass all the way through. The groundsman said to me ‘get ready for a long haul’ and that absolutely we got but, the way we played, it was a really strong bowling performance.

“Harry Podmore was terrific but individual success always takes care of itself. I loved how the guys hunted as a pack. We have been relentless with the ball, have bowled very well in partnerships and thoroughly earned the win. It’s been a tremendous performance.”

Kent Spitfires get underway in the Royal London One-Day Cup under the lights at The Spitfire Ground, St. Lawrence in a repeat of last year’s Final vs. Hampshire on Wednesday 17th April.