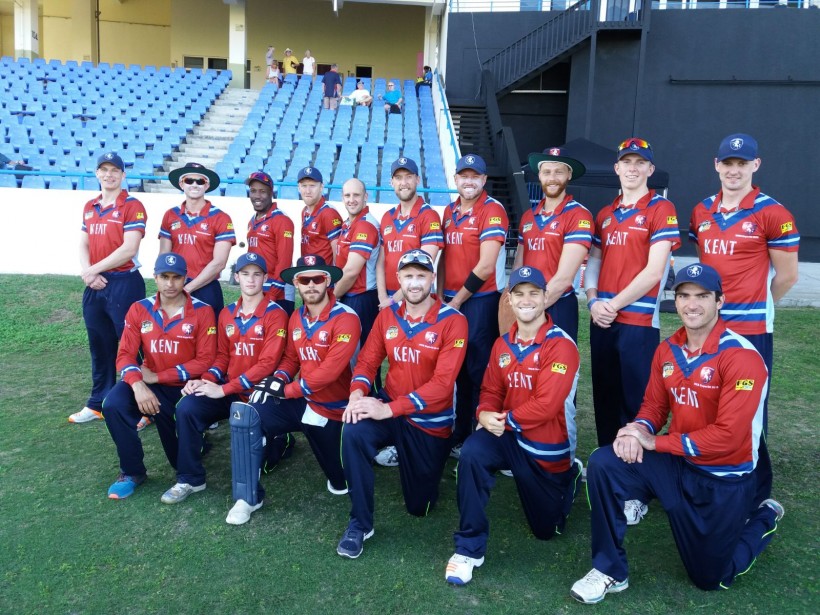 Kent lost a rain-reduced West Indies Super50 Cup semi-final to a talented Barbados side on the FGS Plant Tour in Antigua.

Three West Indies internationals passed 50 as the reigning champions posted 263 with captain Kraigg Brathwaite scoring 105 not out as he added 144 in 21 overs with Roston Chase (81).

In reply, Sean Dickson was the only Kent batsmen to reach 50 as several rain delays disrupted their progress.

After winning the toss and opting to bat first, Brathwaite shared an opening partnership of 93 in 21.3 overs as Barbados played conservatively faced by some accurate frontline bowling by Kent.

Kent’s spinners prospered yet again with a wicket each for Imran Qayyum (1/40) and Adam Riley (1/34) as they restricted Barbados in the middle overs.

The six-times Caribbean one-day champions accelerated in the last ten overs, adding 94 runs with 60 runs scored in overs 41 to 45 before Grant Stewart led the fightback, eventually removing the tournament’s top scorer Roston Chase to complete a spell of 1/53.

On resumption after a second rain delay, Zak Crawley was trapped LBW before Daniel Bell-Drummond moved up to third top-scorer in the tournament before edging behind for 23.

Brathwaite capped a fine all-round display with a tidy spell, rewarded with the wicket of Alex Blake who was clean bowled for a watchful 6 as the spinners put the brakes on Kent’s progress.

Sean Dickson and Adam Rouse joined forces for a gritty stand of 64 before Dickson top-edged a return catch to leg-spinner Hayden Walsh for 50.

Walsh later struck Will Gidman’s front pad on the full and Chase’s off break was chopped on by Rouse for 45.

After a fourth rain delay reduced the contest to an unlikely chase of 37 off 15 balls, Calum Haggett holed out to long-on for 31 and Stewart struck three boundaries in an unbeaten 18 before falling just short.

Rouse ready to earn a spot with the bat