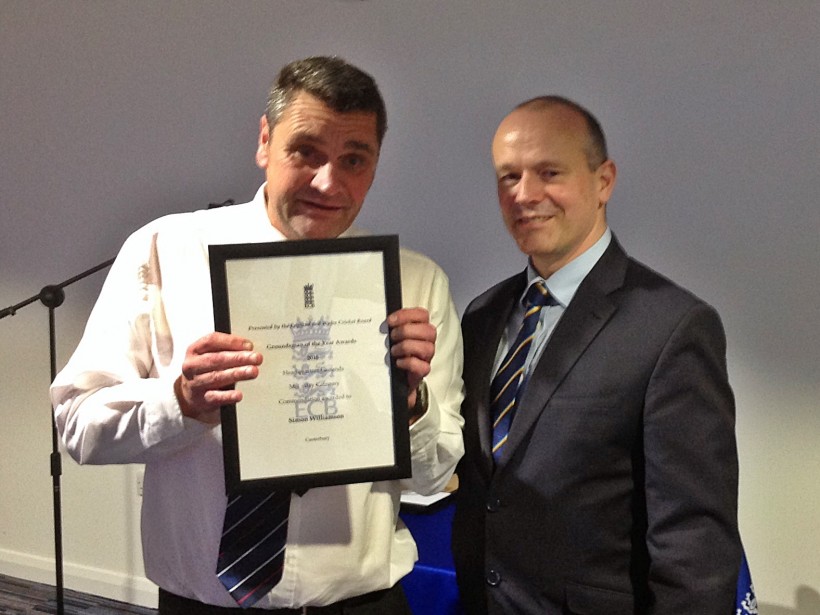 Kent head groundsman Simon Williamson was commended for his four-day pitches at the ECB Groundsman of the Year Awards in Derby last night.

The Manston-based groundsman said: "At Kent, we don't have a culture of coach interference. The chief executive is very supportive and lets us produce the best possible pitch we can.

"The ideal pitch should do a little bit for the seam bowlers on the first morning and get better for batting as the game goes on with a bit of turn for the spinners on the final day."

Yorkshire’s domination of the County Championship continued at tonight’s Groundsman of the Year Awards in Derby, as Andy Fogarty’s pitches at Headingley earned him the main prize for four-day cricket.

Fogarty, a Lancastrian who had worked under Peter Marron at Old Trafford before crossing the Pennines in 1996, won the same award in 2011.

He was also commended in the category for one-day pitches, which was won by Somerset’s Simon Lee – who was runner-up in the four-day category.

There was yet more recognition for Yorkshire in the outgrounds category as Scarborough’s John Dodds was runner-up to Bill Clutterbuck of Guildford, the venue for Surrey’s Championship match against Glamorgan.

Every pitch israted at the end of thematch by each of the umpires with these ratings used as the basis for making the awards.

Before the awards dinner a minute’s silence was held in memory of Harry Brind and Peter Marron, former winners with Surrey and Lancashire respectively who passed away in 2015.

The 2016 fixtures will be released next week. Get the best value with a Kent Cricket Membership