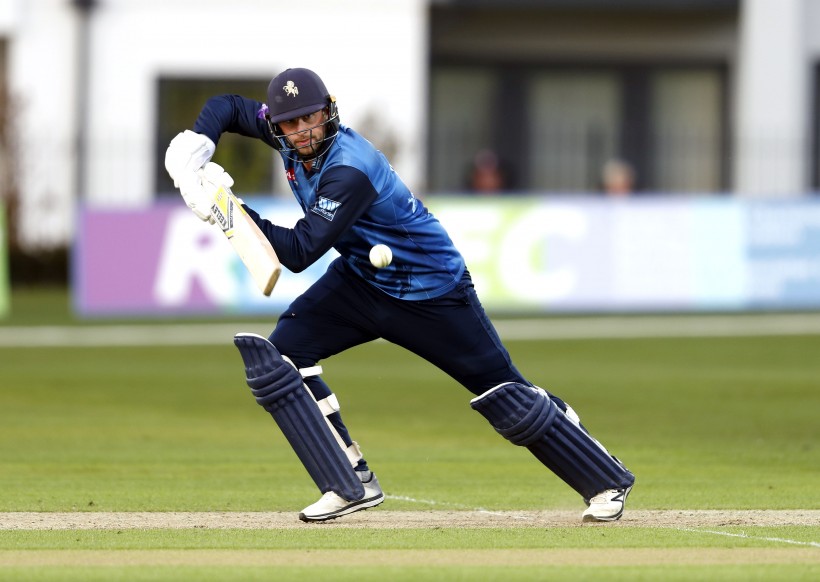 Blake, who has already scored two double centuries for Kent’s Second XI this season showed off his bowling skills, playing for his club side, with a spell of four wickets for 10 runs in six overs with his medium-paced deliveries, which saw Bexley crash to 129 all out in 45.1 overs, MacVicar taking 2 for 20. Shaun Evans, with 39, top scored for the home side, who were without three of their leading players who were all unavailable.

Former Kent bowlers Adam Riley and Adam Ball were away on cricket coaching commitments, and young fast bowler Jas Singh, was playing for Kent’s first team in the match against the Sri Lankan Development side at Canterbury.

It took Hayes just 22.4 overs to secure victory, reaching 133 for 3, with MacVicar undefeated on 68, with eight boundaries and a six. There was a cameo innings from Blake of 28, which included a six into an adjacent field.

It was a difficult debut for Bexley’s new overseas player, Ed Nuttall, who took 1 for 52. The New Zealand left arm fast bowler plays in the same Canterbury team back home, as Kent’s Matt Henry, who will be returning to the county for the second half of the LV= Insurance County Championship season.

There was a debut for Kent’s opening batter, Ben Compton, for his new club side, Sevenoaks Vine. He has scored 560 runs already this season for the Kent first team in the championship, but was dismissed for just 18, as the home side lost to Sandwich by five wickets, all out for 140, their innings destroyed by a 5 for 15 spell of bowling from Ben Smith. Sandwich knocked the winning runs off in 25.5 overs, 145 for 5, Alex Smith 38.

There was a low scoring match at the Rectory Field, with a close finish, Blackheath beating Beckenham by seven runs. Their 141 all out, Tanweer Sikanda 34, proved enough despite Johan Malcolm taking 4 for 27 for the visitors. Beckenham fell short, all out for 134 in 39.4overs, James Fear 72. There were three wickets apiece for Mahi Manfuzel and Arafat Bhuiyan.

The first Kent League century maker of the season was Linden Lockhart, 111 with 11 fours and a six, and 85, from Scottish international, Calum MacLeod, seven boundaries and four sixes, which steered Lordswood to 265 for 9, away to newly promoted Minster (Sheppey), in what proved to be a decisive 98 run victory, despite Joe Parry taking 5 for 47 for the home side, who were then bowled out for 167, Chris Piesley 62 and Ed Moore 50. They got Minster off to the perfect start with a 94 run partnership, but the rest of the batting collapsed as they lost nine wickets for 73 runs, Tom Davis 3 for 43, former Kent Academy student, Hugh Scott 3 for 36.

Bickley Park were 17 run winners over Tunbridge Wells, at the Nevil Ground, Elliott Hooper, who made his Kent first team debut last season, scoring 78 in their 182, Ryan O.Bierne 3 for 40, Matt Barker 3 for 30. In reply Wells were dismissed for 165, Michael Waller 50, Xavier Darroch 3 for 42, Krishna Padmanabhan 3 for 31.

In Division One Canterbury were comfortable 89 run victors over Folkestone, at Polo Farm, after posting 232, former Kent Second XI player Jarred Lysaught hitting 47 and Lewis White 42., Shahan  Sheikh 4 for 34. Evan Munday then took 3 for 11 for the home side as Folkestone crumbled to 143 all out, Chris Jay 34.

There was another big win with The Mote beating Bromley Common by 95 runs, at their Maidstone venue. Matt White 70 and Phil Apps 56 in the home sides 228, and the visitors were dismissed for 133, despite 50 from Nick Greenwood, their innings destroyed by Tom Harvey, with five wickets for 12 runs.

Canterbury based St Lawrence and Highland were three wicket winners, at home to Bromley, scoring 146 for 7, Michael Hales 60, Jack Edwards 3 for 29, the visitors having been bowled out for 145,  Michael Edwards 3 for 18.

Holmesdale scored 142 for 5, which proved enough to beat Linden Park by five wickets, the visitors all out 138. Anthony Bassett 47 and Cameron Lindsay 41 not out for Holmesdale, Kent’s Second XI player, Will Harby 21. James Speer 5 for 66. Ben Fawcett took 4 for 40 in Parks reply.