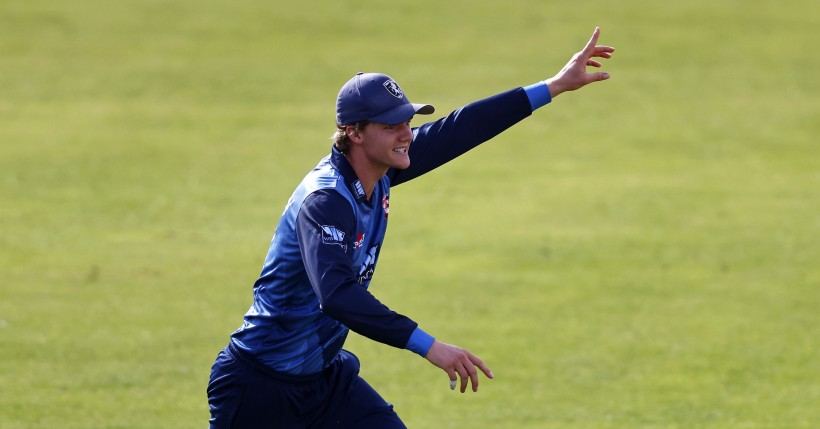 Kent Second XI batter Joe Gordon scored an excellent unbeaten century for his club side, Lordswood, as they won away at Bickley Park by 39 runs in the Premier Division.

Gordon hit seven fours and two sixes, in his innings of 102 not out, and Michael French scored 45 in the visitors total of 217 for 7, from their 50 overs.

Minster (Sheppey) had their lead at the top of the table cut to one point, ahead of Hayes, after suffering a heavy 75-run defeat at home to Sandwich. whilst Hayes won away at Tunbridge Wells.

Sevenoaks Vine skipper and overseas player, Luke Schlemmer, scored his third century in successive matches in his sides 285 for 6, against bottom club, Beckenham, who were bowled out for 204, to give the home side victory by 81 runs.

Schlemmer scored 111, with 21 boundaries, and Michael Cowdrey hit 95 with 14 fours, Junaid Nadir 3 for 53. Beckenham’s James Fear struck 70 with 11 boundaries, and a six, Harri Aravinthan 42, but they struggled to get near the home sides score, their efforts frustrated by a brilliant spell of bowling 6 for 31, from Lorne Burns.

Former Kent all-rounder, Adam Ball, was in good form for Bexley, in their four wicket win over Blackheath, at their Manor Way ground. He took 3 for 45 as the visitors were bowled out for 192, Dipayan Paul 69, Ross Richardson 69, Edward Nuttall 4 for 33. Ball was then 38 not out, and Aiden Griggs had made 52, as the home side reached their winning target, 193 for 6 from 40.4 overs.

It was a good weekend for the Bexley side, as the following day they reached the semi-finals of the ECB National Cup competition, beating Essex League champions, Wanstead Snaresbrook, by two wickets, with three deliveries to spare.

Division One leaders, Holmesdale, gained a crushing 117 run victory, at home to Old Wilsonians, but that was even bettered by St Lawrence and Highland Court, who smashed Folkestone, at home by a massive 218 runs.

In their reply Wilsonians were all out for 232, two batters scoring 200 of the runs between them, and the others failing to reach double figures. Matt Golding hit 160, with six sixes, and 19 boundaries, and Michael Mitchell got 40, Ollie Chaplin 3 for 61.

St Lawrence & Highland Court scored 266 for 8 in their match with Folkestone, who were humbled by being skittled out for just 56 runs, in 15 overs, a remarkable collapse, which saw Australian overseas player, Mickey Edwards, take 6 for 11, and Joe Payne 4 for 36. In the home sides innings Michael Hales and wicket-keeper Sully Gould, both scored 41.

There was a disappointing home defeat, at Polo Farm, for home club Canterbury, who lost by eight wickets to The Mote. They could only muster 185 runs in 48.3 overs, the visitors winning in 39.1 overs, 186 for 2. Jarryd Taig made 54 for the home side, and former Kent Academy student Isaac Dilkes 50. All rounder, Jesse Christensen 3 for 43, and he was then 87 not out, with 15 fours, as the visitors  cruised to their win. Matt White 63.

Denly: “The end goal is to get as far as we can”