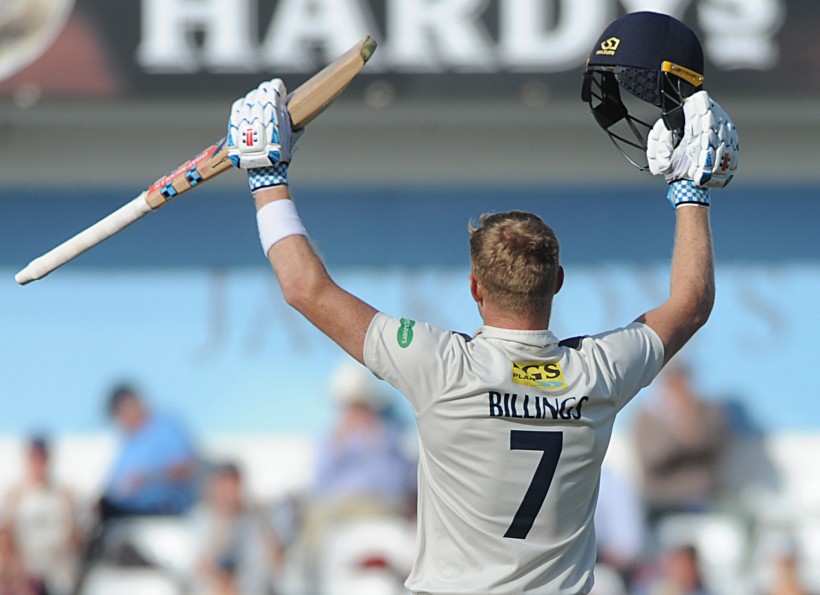 Sam Billings became the first player to score two hundreds in the same County Championship match at Emerald Headingley as Kent set Yorkshire a target of 551 shortly after tea on day three and hurtled towards victory with six wickets.

The Kent captain, on the fringes of England’s limited overs teams, is making a late play for a winter Test call-up having scored three hundreds in his last three Specsavers Division One innings.

He hit 100 in the second innings of last week’s win at Nottinghamshire before adding 138 in the first innings here and then 122 not out off 156 balls.

Kent started their second innings two overs before close on day two with a lead of 213, opting not to enforce the follow-on.

Billings underpinned their progress to 337 for seven declared seven overs after Tea, leaving Yorkshire with 22 overs of batting before close. They reached 44 for six, four of them for Darren Stevens.

Kent are set to replace Yorkshire in fourth place in the table ahead of next week’s final round.

In August 2017, West Indies batsman Shai Hope hit two centuries in their Test victory over England here, but Billings is the second – and the first in the Championship.

In the first innings, Billings was also part of a 346 partnership with Stevens, the highest sixth-wicket stand on this ground.

The 26-year-old endured a frustrating start to the summer with only one appearance in the IPL with Chennai, forcing him to miss the start of the county season.

In his first appearance for Kent in late April, he suffered a dislocated shoulder which sidelined him for just over three months.

It meant he missed out World Cup selection, prompting him to describe the last six months as “the worst of his cricketing career by a mile”.

Now, his name will be mentioned as a middle candidate for England’s Test series in New Zealand in November.

He reached his second hundred in the match off 138 balls with 10x4s and one six with the first ball of the evening session, with Kent’s lead passing 500 later in the over.

That they batted on that long was a surprise.

Much in the way Billings’ first-innings century was overshadowed by Stevens and his sensational 237, Ollie Robinson’s 97 very much played second fiddle.

The wicketkeeper-batsman, batting at three in this match for the first time in his short first-class career, missed out on his second ton of the season against Yorkshire after 103 in the May defeat at Canterbury.

The pair had shared 124 for the fourth wicket either side of lunch.

Billings played confidently all around the ground, reaching his fifty off 80 balls with a six over extra cover off New Zealand Test left-arm spinner Ajaz Patel, who conceded 100 runs in each innings on his White Rose debut.

No team has ever chased more than 502 to win a Championship fixture, while the world record first-class chase is 536.

Duanne Olivier and Patel also claimed a wicket apiece, while there were two run outs.

Stevens then trapped Matty Revis and Adam Lyth – the latter offering no shot – lbw and had Gary Ballance caught at second slip as Yorkshire fell to 16 for three.

Zak Crawley also pulled off a brilliant one-handed catch at third slip to help Milnes remove nightwatchman Patterson, the third wicket to fall on 43 in 12 balls.

On being told he was the first Championship player to hit two centuries in one game at Emerald Headingley, Billings said: “Really? Wow. That is amazing.

“Look, it was just enjoyable to have some time in the middle. As I’ve said before, it’s been a disappointing Summer for myself, missing a home World Cup etc.

“I’m trying to make up for lost time. When you’re in form as well, you can’t take it for granted. You’re always going to have a run of bad form, especially in the red ball game. It can be even more brutal than the white ball game. When you’re in a good run of form, you have to make the most of it.

“I’m really enjoying my batting at the moment, and it’s great to play in this team.

“If I’m honest, I was hoping to get two maybe three wickets tonight.

“The thinking behind us batting on was that you don’t want the ball to be too old going into that morning session, 10.30am start. It’s done more in that first hour every morning than any other part of the day.

“You don’t want to be bowling with a soft ball. We’ve got more than we thought. The boys did exceptionally. Darren Stevens keeps going.

“I’ve got two hundreds in the game, and I’ll probably not even be talked about. It’s his game of cricket.

“I also thought Ollie Robinson played brilliantly today. He’s had a fantastic season. His keeping’s got better and better, and he’s a really exciting batting prospect.

“We dropped six catches in the first innings, albeit some really tough chances. But a couple of bits of magic there in the field. It’s a funny game, cricket. When things are going your way, things like that happen. Visa versa when it’s not.” 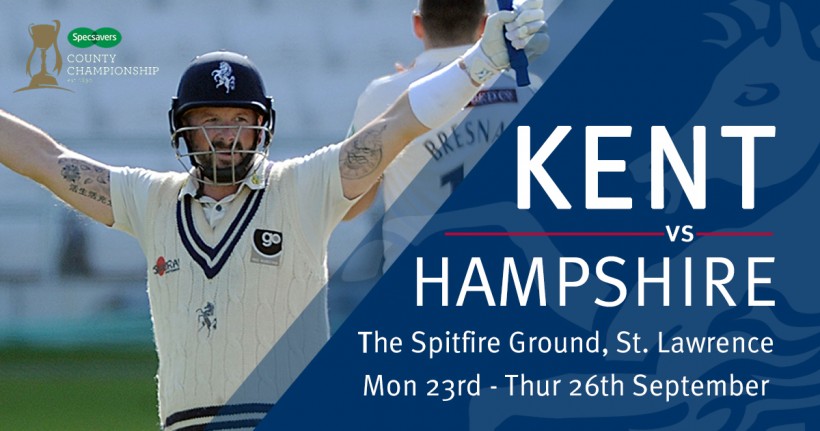