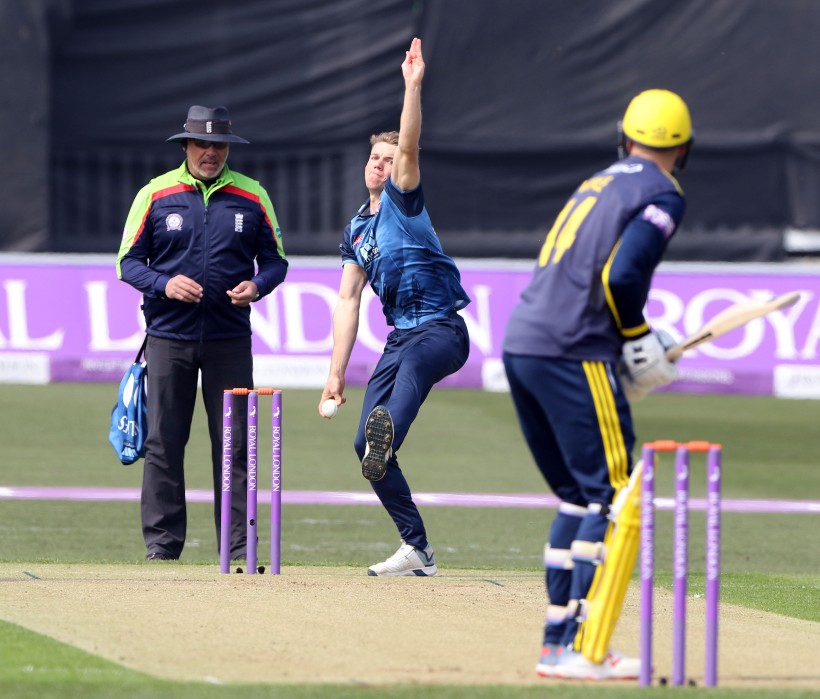 Kent Spitfires were beaten by a strong Hampshire side by 90 runs in the first competitive day of cricket at The Spitfire Ground, St. Lawrence, in front of Sky Sports cameras in the Royal London One-Day Cup.

The Spitfires won the toss and elected to field. After a strong start from the visitors, Matt Milnes, on white-ball debut for Kent, struck, removing both openers by the 14th over.

James Vince and ex-Kent captain Sam Northeast steadied the ship for Hampshire, with a partnership of 65 before Imran Qayyum removed Vince for 56 in the 26th over.

Fred Klaassen (2-62) and Imran Qayyum (1-45) also contributed with the ball, but Northeast capped off an assured batting performance by top-scoring for Hampshire – finishing Hampshire’s innings 105 not out, carrying his team throughout as his batting partners fell beside him.

Hampshire posted a competitive total of 310/9 on a good batting surface.

Matt Milnes finished with figures of 5-79, topping the bowling charts for the Kent Spitfires.

Kent’s innings got off to a bad start when two quick wickets of Daniel Bell-Drummond and Matt Renshaw fell in the first five overs as Kent suffered an unfortunate run-out of interim captain Heino Kuhn at the non-strikers’ end without scoring.

Alex Blake and Adam Rouse both contributed with scores of 20 and 22 respectively before opener Zak Crawley fell to an unlucky run out when on 49.

Swashbuckling innings from Darren Stevens (30) and Harry Podmore, who recorded a new List A high score of 40, gave the slightest glimmer of hope to the Kent Spitfires, before Stevens was caught in the deep after hitting two consecutive sixes and Podmore also being caught trying to keep up with an ever-climbing run rate.

An efficient innings of 26 from 18 from Matt Milnes, including a tidy ramp shot over Hampshire’s wicketkeeper for four runs, came to an end when he too was run out trying to keep up Kent’s scoring rate.

A last wicket stand of Imran Qayyum and Fred Klaassen was short-lived and Kent ended their innings 220-all out after 40 overs, succumbing toa 90-run defeat.

Second date added for An Evening of Queen